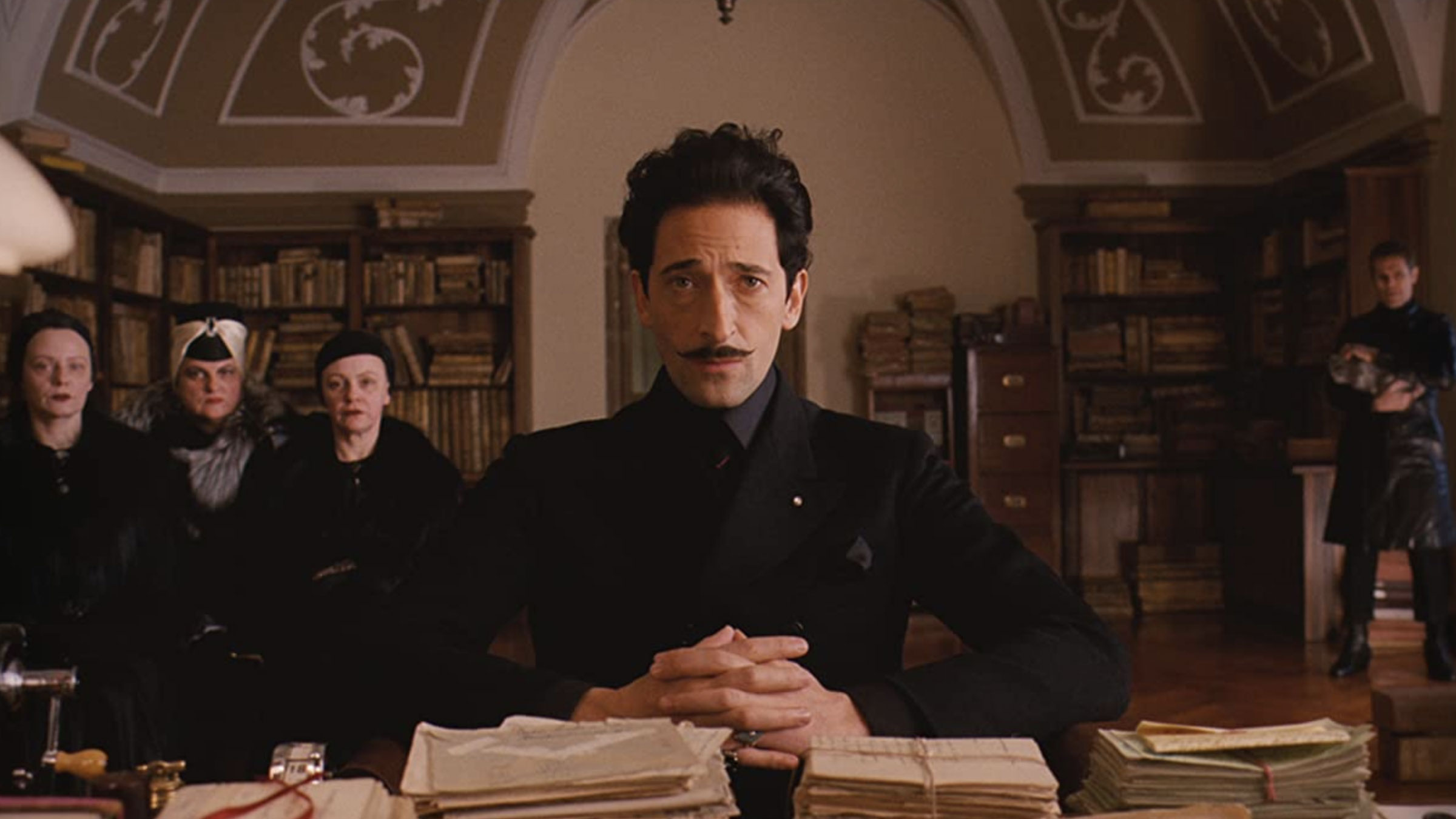 I’ve been a fan of Wes Anderson’s films ever since I was channel surfing a long, long time ago. I came across a movie starring a then unknown Owen and Luke Wilson and as it turned out that movie was Bottle Rocket. As time has shown, that was the catalyst for Anderson’s film career and led to other films like Rushmore, The Royal Tenenbaums and Fantastic Mr. Fox just to name a few.  If you’ve never seen a Wes Anderson film, well you’re in for quite a treat. They’re quirky, off beat, have colorful characters, witty and fast-paced dialogue and certainly don’t conform to the norm.  Then again, isn’t that what filmmaking is all about? Anderson litters his casts with the most familiar of faces, and some that are new to the world of acting. He’s got his favorites, for sure (Bill Murray, Owen Wilson, Willem Dafoe and Jason Schwartzman all come to mind) but even these mainstream actors seem right at home in Wes Anderson’s world.  With The Grand Budapest Hotel, Anderson has once again assembled quite the ensemble cast and if you’re a fan of his work, this is more of the same – only better. Let’s check in.

The story, told in flashback form, focuses on M. Gustave (Ralph Fiennes), a legendary concierge of the Grand Budapest Hotel. Located in the Alps and set in the 1930’s, the hotel becomes the center of attention when one of the eldest patrons turns up dead.  Leaving one of her priceless heirlooms, a priceless painting of a boy with an apple, the greedy family, led by Dmitri (Adrien Brody), uses any and all means necessary to get the priceless artifact. This, of course, is only one of the stories swirling about. As Gustave and his loyal compatriot (Tony Revolori) try to avoid Jopling (Willem Dafoe) and Henckles (Edward Norton) we begin to see there’s much more than meets the eye. And, like all other Wes Anderson films, it’s really kind of hard to summarize into a narrative plot.

It’s hard to pinpoint which of the cast does the best job. They all deliver fine performances, but I’d have to give ample credit to Ralph Fiennes. Fiennes is in rare form here as the delightful Gustave and just picturing this guy as Lord Voldemort from the Harry Potter films shows the range of the actor. Simply put, he’s amazing. Of course the star-studded ensemble cast does their absolute best as well and just seeing Edward Norton, Jeff Goldlbum, Tilda Swinton, Jude Law, Harvey Keitel and F. Murray Abraham (I left out several) is a testament to the power of this film and Anderson as a filmmaker. I’ll actually go on record and say that, as of this writing, Anderson sits atop my list of favorite directors. While The Grand Budapest Hotel isn’t my favorite Wes Anderson film (that honor still lies with The Royal Tenenbaums), this is right up there.  It’s hard to find the words that do these films justice, so sit back and literally enjoy the ride.

I remember watching this when it first came out via Twentieth Century Fox’s Blu-ray and being more than pleased. However, Criterion isn’t exactly known for mailing it in when doing their titles. And, what can I say – The Grand Budapest Hotel looks fabulous regardless of the scene you’re watching. The 2.40:1/1.85:1/1.37:1 AVC HD images will either stretch the limits of your screen or provide a nice little window box for the movie to so adequately fill.  Colors are a bit on the overcooked side, but considering the candy-colored palette used, it’s understandable.  Anderson’s scenes look like dioramas, with each actor or prop put precisely in their places.  Detail is top notch as well. This one will keep you on your toes, but at this point – are you surprised?

The DTS HD Master Audio sound mix evokes a quality that’s both charming and dramatic at the same time and seems to be the same track that Fox used on their Blu-ray. The film is relatively new, so I can’t imagine anything short of a Dolby Atmos track would make much, if any difference. Yes, I realize that doesn’t make a lot of sense, but Anderson’s films have a very witty and playful tone to them and a majority of that is brought out in the soundtrack. Vocals are full and crisp, lacking any distortion. Surrounds chime in at just the right moment to add some emphasis on the selected scenes. Simply put, if you’re familiar with Anderson’s other works, this is on par with those. And while not being too overpowering, this seems to get the job done nicely.  Well done.

If you own the Fox Blu-ray, then the big draw with this edition are the new assortment of supplements. While Fox’s disc had a modest section devoted to extras, this Criterion edition ups the ante with some all-new features.

Odds are that you either love Wes Anderson’s films or you don’t. And I have to imagine if you’re reading this, then you’re one of the former. Fox’s 2015 Blu-ray looked and sounded good and had a modest selection of supplements. Criterion’s Blu-ray looks a tad bit better and, from what I can tell, sounds the same. But the real difference are the abundance of extras that were compiled for this edition. I suppose “purists” will have both as part of their collection, but let’s face it – true fans will want to add this one to all of the other Criterion titles out there.