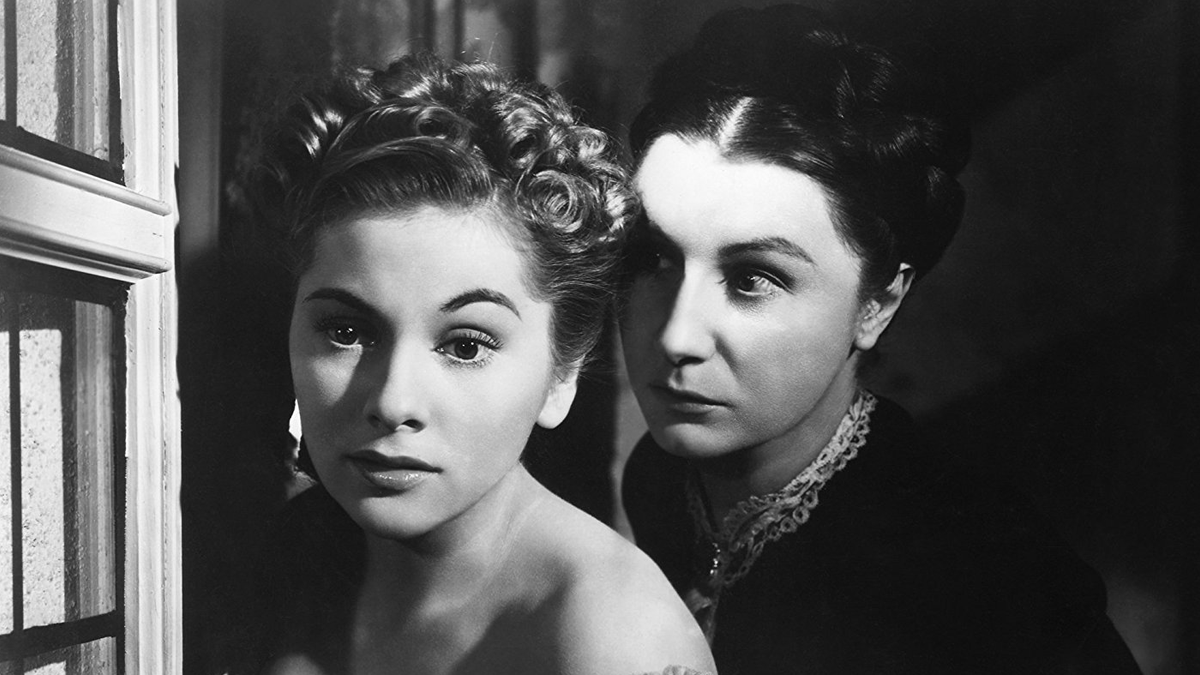 A young woman (Joan Fontaine) is in Monte Carlo with her overbearing employer, so she doesn’t expect much in terms of excitement. But when she meets Maxim de Winter (Laurence Olivier), all that changes and she gets a lot more than she bargained for, to be sure. A whirlwind romance soon blossoms and by the time all is said & done, the young woman has become the second Mrs. de Winter, as his first wife passed on. This event still troubles Maxim, as he lost his former wife in a boating accident and he hasn’t recovered in full. When the two return to Maxim’s large estate in Cornwall, she discovers that he isn’t the only one having problems letting go of the first wife, whose name was Rebecca. It is almost as if Rebecca haunts the grounds, the employees, and of course, even Maxim himself. The spirit’s hold on the house is sending her over the edge, but she is unsure how to proceed toward a solution. Can she somehow manage to put the spirit at rest, as well as allow herself a normal lifestyle?

This is not Hitchcock’s best known film, but it is an excellent one and ranks as one of his finest, if you ask me. I’ve always loved Rebecca, as well as other Hitchcock films from the 1940s, perhaps even more than Hitchcock’s later works, though I like those as well. The blend of romance and suspense is so flawless, thanks to Hitchcock’s masterful direction, some superb writing touches, and of course, the knockout lead performances. As in any good suspense picture, Rebecca has atmosphere to spare, thanks to the simply awesome cinematography involved. Although the 1.33:1 Academy Ratio doesn’t offer the same canvas as a widescreen format, the images here look rich and always impressive, some of the best from this time, I think. As such, it should be no surprise that it won the Oscar for Best Cinematography and in addition to that award, Rebecca also took home Best Picture, also well deserved. I can never tire of watching this masterpiece of suspense, so of course, I am pleased to see a lavish edition like this one released. As such, I highly recommend Rebecca to all film fans and as this is the definitive version, it’s the one to own.

He is hailed as one of the true masters of cinema and the master of suspense, thanks to a resume loaded with excellent pictures. I think director Alfred Hitchcock is best known for his later works, which were more brisk and modern, but lost none of the impact he was known for. While I like his movies from the 1960s and beyond, I often return more often to his films from the 30s and 40s, which I like a little more than the others. The slower pace and more confined visuals just seem to work better for me, as well as the (often) black & white cinematography. As I said, I enjoy his work from all of his active decades, but for some reason, the 30s and 40s just seem to call to me more, which I think is a good thing indeed. Other films directed by Hitchcock include Spellbound, The 39 Steps, Secret Agent, The Lady Vanishes, Notorious, Rope, and The Paradine Case. The cast here includes Laurence Olivier (Marathon Man, Spartacus), George Sanders (All About Eve, The Picture of Dorian Gray), and Joan Fontaine (The Women, Island in the Sun).

Rebecca is presented in a full frame transfer, as intended and has undergone a new 4K restoration by Criterion. Having owned Criterion’s laserdisc release of this film in the past, this newly restored version is hands down a massive improvement, in all respects. The print looks pristine at times and never less than very clean, with minimal blemishes to report, save a few instances. The materials show no serious wear signs, so the image almost glows at times and I was blown away here, to say the least. The contrast is on the mark also, which means the lush black & white visuals are in full force, simply gorgeous. I cannot say enough about this excellent transfer and while the film was released in 1940, you wouldn’t know it from this superb visual presentation.

In addition to the great digital restoration work on the video, Criterion also spent some time with the audio materials, adding a new PCM mono mix. One of the best mono tracks I’ve ever heard in fact, certainly the best from this era, I think. The elements have a clean, never thin sound and while it is mono, it is a rich mono and that’s enough. The music and sound effects are in fine form also, but this one is mostly about the dialogue. No worries there however, as vocals come through in clean, crisp form at all times. This release also includes English subtitles.

Criterion’s two disc DVD was released back in November 2001 and most of the supplements from that have made the leap to this Blu-ray.

Oddly Rebecca is the only one of Alfred Hitchcock’s films to have won Best Picture and many don’t consider it to be among his best. A fairly early release by Criterion, the new 4K scan is a step up in picture quality from the previously-released 2001 DVD. Most all of the supplements have made the leap to this version along with a few new ones. If you don’t already own it, this is a perfect Hitchcock film to add to your collection.