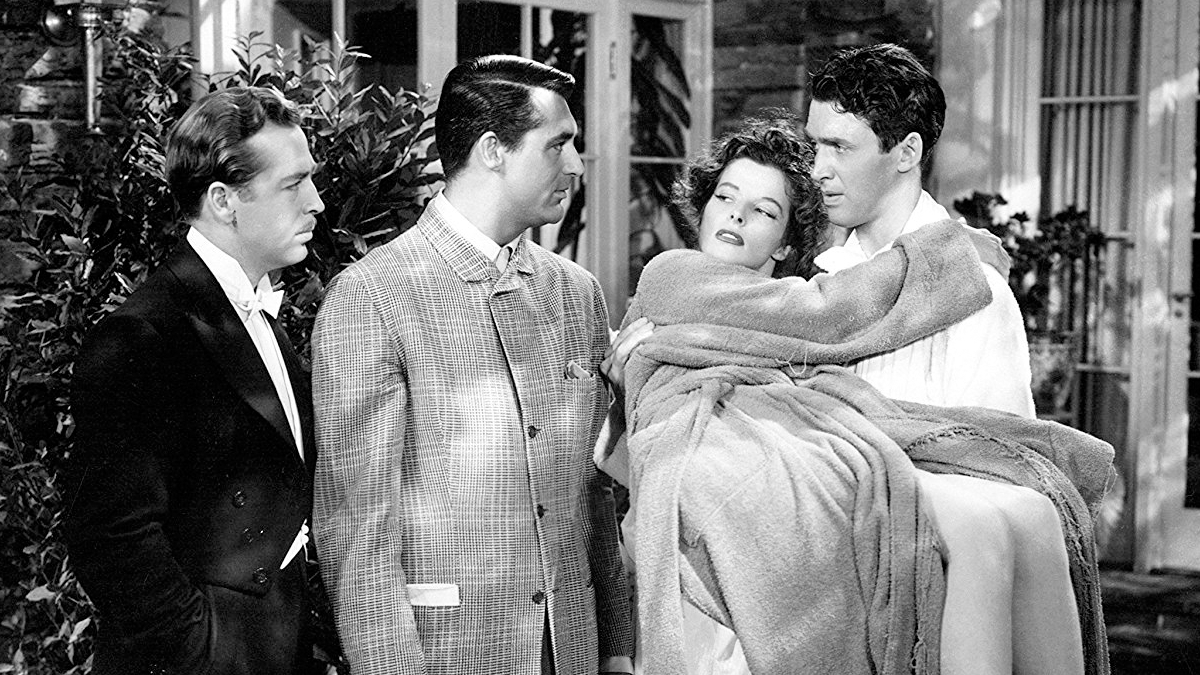 The Philadelphia Story is a remarkable film in more ways than one. In addition to being named one of the American Film Institute’s Top 100 movies of all-time – it also marked a comeback for one Katherine Hepburn who had been deemed “Box Office Poison” just a few years earlier (oddly enough after Bringing up Baby then considered a flop and now considered a masterpiece)! Hepburn also starred in the Broadway version of this and purchased the film rights to it with only one condition: she star in the movie. It happened, she returned to stardom and the rest, as they say, is history. The rest of the cast included James Stewart and Cary Grant – all were at the top of their game. It’s notable that Stewart won the Best Actor Oscar for his role here, even when his role in Vertigo was considered his best (and perhaps one of the best…ever). Hepburn originally wanted Clark Gable and Spencer Tracy for the two other roles but they were busy with other projects. Who knows if this movie would have worked as well with other actors, but as it stands now – it’s just about perfect.

The plot is relatively simple and perhaps this is why the movie works so well. Tracy Lord (Katherine Hepburn) is a wealthy Philadelphian heiress who has thrown out her husband (Cary Grant) a few years earlier. She’s now set to marry George Kittredge (John Howard) in true society fashion. Dexter (Grant) is now employed by “Spy” magazine who shows up at the mansion the day before the wedding determined to spoil things for his ex-wife. He brings along Mike Connor (James Stewart), a cynical reporter with distrust for the wealthy. In a very short span of time both men fall for Tracy, thus complicating matters even more.

This is one of those timeless movies that will really never go out of style. The casting is perfect, even more so now than in the day. James Stewart, Cary Grant and Katherine Hepburn had outstanding, prosperous and long movie careers and this is them in their prime. While the story might be a high-society version of “The Taming of the Shrew”, this has it’s own style and substance. The real shocker is that James Stewart won his Best Actor award here instead for some of his better roles (Vertigo, Mr. Smith Goes to Washington, It’s a Wonderful Life and Harvey to name a few). This movie not only established Hepburn as a lead actress again, but as a powerful force in Hollywood. And Cary Grant…well, could anyone else play the suave, sophisticated character like him?

The Philadelphia Story is now in the capable hands of the Criterion Collection and, as such, a new 4K restoration has been minted for this release. What we can expect is higher resolution and even as good as the 2005 DVD looked, it’s just not on par with this new release. The image sports a much cleaner look, some of the dust and debris has been removed from the previous DVD release. Contrast and black levels are also strong (this is a black and white film, so these play a larger role). Increased detail and textures are also almost immediately noticeable. Odds are that when Criterion gets their hands on this, especially when it’s one of America’s favorite films, the red carpet is rolled out and the results are simply astounding.

Most any film made before 1980 isn’t going to sound that great. It’s not a fault of the film, rather when it was made. So, for a film made in 1940 to sound fairly decent (by today’s standards), is a feat indeed. Regardless of how many speakers you’ve got in your setup, you’ll only use one when watching this classic. And that’s all you’ll need. Criterion has used a linear PCM Mono track (encoded at 24 bits) to authentically duplicate the film’s audio and, as with the video, the results are superb. Dialogue from these movies made in the 40’s can sound very hollow and sharp, but that’s really not the case here. Of course, any and all directional effects are out of the picture (so to speak), but this mono track breathes new life into this age-old soundtrack.

A hodgepodge of extras can be found here, and a few from Warner’s 2005 DVD release have made the jump, but Criterion has a few tricks up their sleeve as well.

There’s no denying that with The Philadelphia Story, all the leads were in top form. This is the first time that the film has been released on Blu-ray and it’s a marvelous effort by Criterion. Warner’s 2005 two-disc edition is now essentially defunct (unless you clamor for some of those supplements). The upgraded audio and video as well as the new supplements make this one a no brainer.