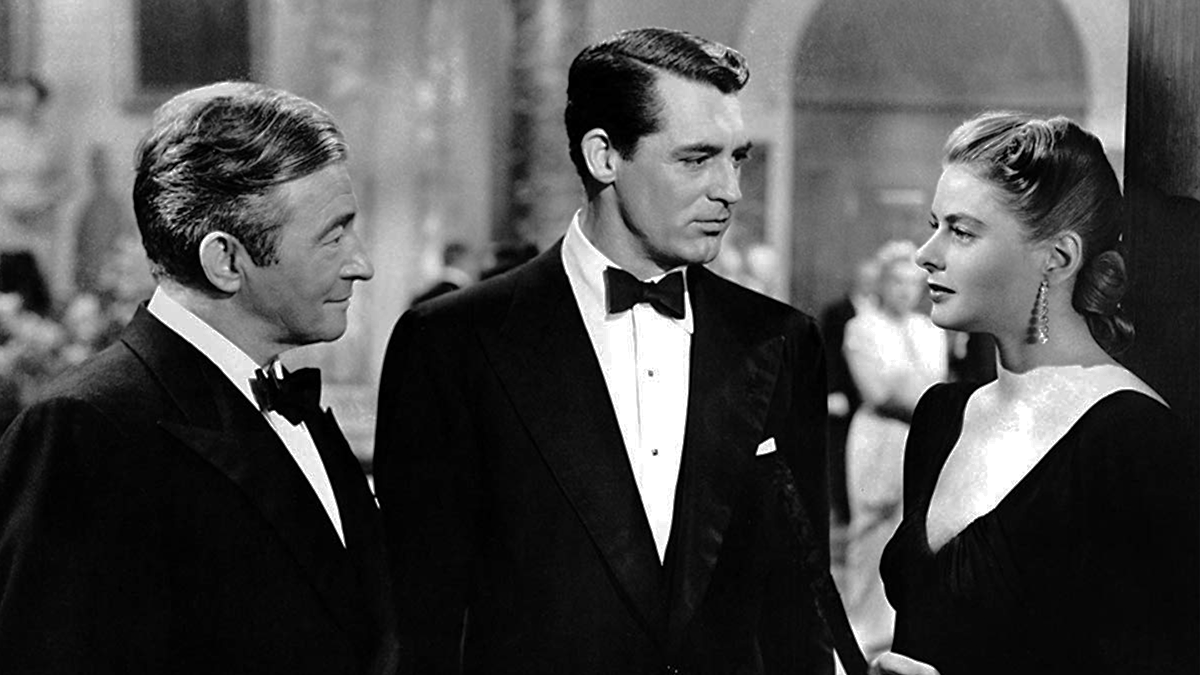 Alicia Huberman (Ingrid Bergman) has a rather checkered past, as after her father was convicted for treason and took his own life, she fell into booze and men. But because her father was a Nazi agent, she is enlisted by government agent T.R. Devlin (Cary Grant) for an important mission. She is to report to Rio de Janeiro, where she is to meet with some of her father’s Nazi buddies and establish a bond with them. Once she has gained their trust and the information starts to be shared, she is to then report it to Devlin, who can ensure it ends up in the right hands. For Alicia, this is a chance to cleanse her name and do some good, which sounds like just what she needs. As time passes, she begins to have feelings for Devlin, but he shuns her because of her lifestyle choices. The operation continues as planned, but when Alicia ends up married to Nazi agent Alex Sebastion (Claude Rains), the mission takes some unexpected turns. Devlin knows Alicia faces danger where she is, but in order to save her life, he has to make some cold, hard decisions.

This is the kind of release that should excite film lovers to no end, as one of the all time classics has been given the complete red carpet treatment. Notorious is a film that has won audience & critical praise since 1946 and never seems to lose steam, picking up masses of new fans with each new generation. As directed by Alfred Hitchcock, it has elements of romance & suspense and blends them to perfection, never too much of one and not the other. The romance seems like an odd one and it is in truth, but it works very well within the storyline and with such well developed characters, it never seems out of place. As per usual, Hitchcock has no trouble piling on generous helpings of suspense, with simply excellent results. A lot of the suspense comes from the characters here and not just the situations, which keeps the viewer guessing and always trying to discern motivations. All too often, tense films like this let down at the end, but Notorious even delivers full force when it comes to the final moments. I am thrilled to see this lush presentation of such a great picture and as such, this one is nothing short of a must own title.

The man directed a lot of excellent films, but if you ask me, Notorious is one of Alfred Hitchcock’s finest efforts. I love the way he blends romance & suspense here, a theme he went to many times in his career. He managed to deliver a number of pictures that succeeded in bringing the two elements together, but Notorious is simply one of his greatest. It is not as flashy as some of Hitchcock’s later pictures, but it is every bit as suspenseful and ranks as one of his most powerful pictures, which is a real compliment. I know his fans will never all agree that one stands out as his very best, but to me, this one is the top of the charts. Such rich characters within a complex storyline, always well written and engrossing, from the start to finish. I know it sounds like I’m repeating the same line over and again, but I think this is some of Hitchcock’s greatest work, hands down.

With a film of this age, it’s a sure thing that it’s seen every incarnation of home video release ever available. I used to own the Criterion LaserDisc and was wowed by the Standard DVD offering some years ago. But this has undergone an extensive restoration and it shows, literally. While the image seems to have a small amount of additional grain, it has much richer black levels and gives the movie a more cinematic look. The black & white image looks very sharp and clean, with a well preserved and restored source print utilized. While there’s not a night and day difference between this and Criterion’s old DVD, this is certainly the best the film has ever looked and once again Criterion has knocked it out of the park.

The included mono option has been restored and remastered, with terrific overall results. I heard minimal age signs here, which means the elements come through in clean & clear form, simply wonderful work. The musical score sounds rich and never dated, while sound effects are also well presented, as far as mono is concerned. The dialogue remains crisp and sharp at all times, with no volume errors to report. This is an excellent audio treatment, considering the film was made in 1946 and all. This disc also includes optional English subtitles.

A number of the same supplements from the previously-released DVD have made the leap to this Blu-ray edition, but we’re also treated to some new material as well. How nice!

Like the Coen Brothers, Steven Spielberg or Woody Allen, we’ve all got a favorite Alfred Hitchcock film. For me, it’s Rear Window, but there are many that consider Notorious to be theirs. Criterion’s new Blu-ray has upped the ante with an improved picture and sound as well as a bevy of new supplements. There’s really no reason for any self-respecting fan of classic cinema not to add this to their collection.