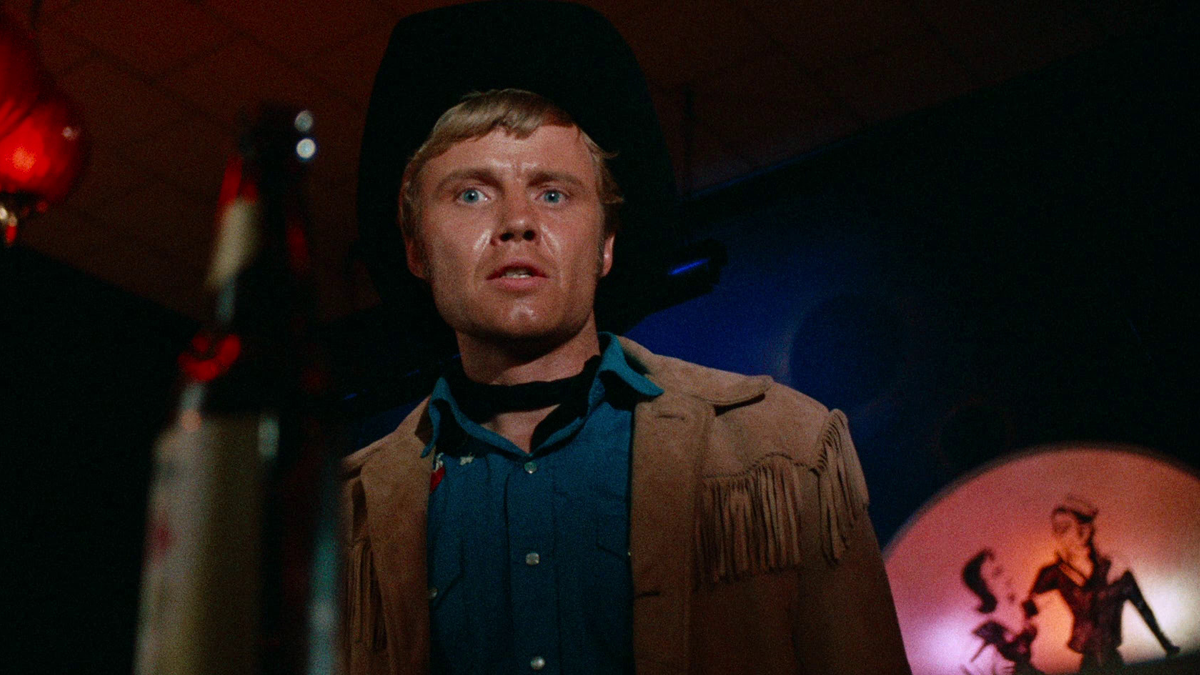 Midnight Cowboy is rightfully considered a classic film. It received three Oscar wins: Best Director, Screenwriting (Adapted), and Film. The two leads were nominated for Oscars along with supporting actress Silvia Miles. It also was nominated for best editing. All of this was very surprising since the film was Rated X. Just being nominated was a long shot, but the X rating pretty much guaranteed that it would not win the Oscar for Best Picture. It was such a long shot that director John Schlesinger was not even in America, let alone the award ceremony, to win his Oscars. In many ways, this was a harbinger of how culture was changing. This film was the changing of the guard from old Hollywood to a new era.

The plot of the film revolves around Joe Buck (Jon Voight.) At the beginning of the film, dishwasher Joe decides that he will be able to leave Texas and make it as a prostitute in New York City. His dream is that if he dresses up as a Cowboy, he will be able to lure rich older women into bed. On the bus ride to New York it is revealed through a series of flashbacks that he had a strange relationship with his grandmother, was abandoned by his mother, had heavy Christian upbringing, and dated a girl named Crazy Annie. Upon arriving in New York, he has no idea how to get his start in the business. The first woman he manages to seduce ends up getting twenty bucks from him. When Joe meets a crippled con man named Enrico Salvatore “Ratso” Rizzo (Dustin Hoffman,) Rizzo cons him out of twenty bucks. Joe is evicted from his hotel and hits rock bottom when he bumps into Rizzo again. Rizzo makes amends and they begin to live together in squalor with Rizzo dreaming of managing Joe until they have enough money to go to Florida.

The film holds up beautifully fifty years after it was produced. The screenplay by Waldo Salt, adapted from the novel by James Leo Herlihy, is a masterclass in fully realized characters and strategically placed flashbacks and flash forwards. Joe Buck and Rizzo are characters that feel so real, their dramas and dreams so human, it is impossible to not find yourself emotionally relating to them. The trials they face are real – hunger, sickness, fear of failure. That is why this film is a triumphantly humanist piece of art. Very rarely are social outcasts brought so fully to the forefront. This film manages to shine its spotlight on the downtrodden hustlers and losers of the world – the hapless dreamers that so rarely survive what the world throws at them. In doing so, the film also depicts the end of a counter-culture. This film depicts the Andy Warhol Factory just as it was ending, casting Ultra Violet and other Warhol fixtures in the film.

This film captures New York as it prepared to enter the Seventies and Eighties – the last couple decades where New York seemed frightening. This film seems to feature the city as a type of beast set to devour those unable to defend themselves with a good steady job. Miami in contrast is the dream – a sun streaked oasis with rich women that want to pamper young men.

While this film showed the end of the Warhol era, it also shed light on the counter culture in such a constructive way that even the Academy couldn’t deny it an Oscar. This is a film which features homosexuality, religious fanaticism, subversive thoughts on religious upbringing, incestuous images, allusions of rape, at a very conservative time in this country. This was not common in films at the time. The filmmakers took risks and amazingly enough their efforts were rewarded. This set the stage for an entire generation of filmmakers to follow their dreams. In the next decade we would see the works of Cassavetes and Scorsese that obviously owe a debt of gratitude to this film for being a trailblazer for this type of underdog cinema.

The film benefits from numerous things. The direction by Schlesinger is pretty much perfect. The performances he gets out of Voight and Hoffman are as good as it gets. While I have always been a little thrown off by Voight’s accent in the film, I still love his performance. Hoffman has never been better than in this film. While I watch The Graduate much more often due to how light the material is, his performance here is his personal best. The cinematography by Adam Holender is beautifully put together and well thought out. At the time it was strikingly original, and it still holds up beautifully. The theme song sung by Harry Nilsson is well known and loved. John Barry delivers a subtle and effective score that only enters the film when appropriate.

To focus on the plot once more, this film has a great sense of humor and knows how’s to be melancholy in effective and realistic ways. Overall, many films fade from memory. Midnight Cowboy is an unforgettable film. If you have never seen it, you are in for a treat.

Criterion provided these details in the booklet:

This new digital transfer was created in 16-bit 4K resolution on a Lasergraphics Director film scanner from the 35mm original camera negative. A 35mm interpositive was used for some sections where the negative was damaged. A 35mm theatrical print made for the 2004 twenty-fifth anniversary of the film — supervised by director John Schlesinger, producer Jerome Hellman, and cinematographer Adam Holender — was referenced for color correction. The 4K digital restoration was approved by Holender. Thousands of instances of dirt, debris, scratches, splices, and warps were manually removed using MTI Film’s DRS, while Digital Vision’s Phoenix was used for jitter, small dirt, grain, and noise management, and Pixel Farm’s PFClean for flicker and chroma breathing.

Criterion have done it again. This new pristine 4K digital restoration is one of the most impressive restoration efforts of a classic film ever produced. I thought that the work they performed on Barry Lyndon was incredible, but this is even more impressive overall. This new transfer has completely changed how I looked at this film and the viewing experience in general. Midnight Cowboy has always looked a bit muddy in every format. That is not the case anymore. This was an absolutely astounding success that must be seen to be believed, Watch it on a big Ultra HD screen to really get the impact of the work they have put in.

Criterion provided these details in the booklet:

Criterion Collection have done the right thing and provided both DTS-HD MA Mono and DTS-HD MA 5.1 tracks for the film. In this case, I only get the need to listen to the new mono track provided by Criterion. It sounds absolutely fantastic. Dialogue is crystal clear and the music sounds great at every turn. They know what they are doing and this is a great example of how fantastic a mono track can sound.

Midnight Cowboy helped to change the course of cinematic history. It is such a good picture and Criterion have worked absolute miracles on the visual presentation of this film. The new 4K presentation changes how this film will be viewed forever. The special features took me a full week to watch and they are all excellent. This is easily one of the best releases that has come out this year. Go buy it now. Quit wasting time and see it for yourself.