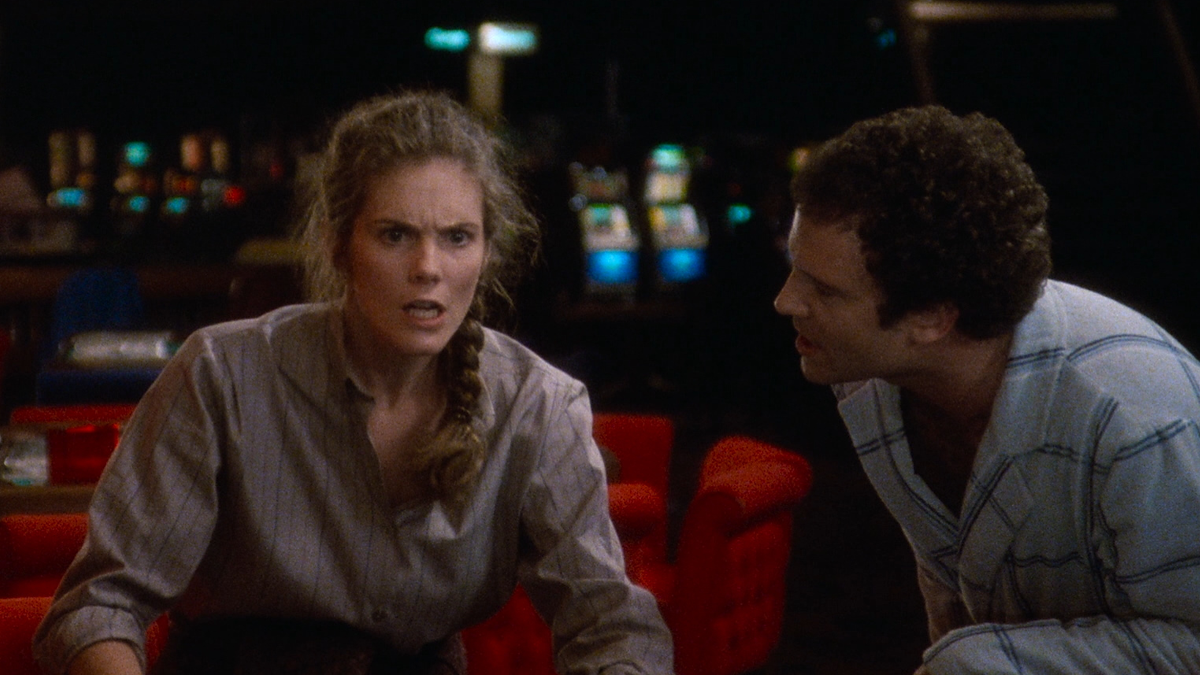 David Howard (Albert Brooks) is tired of being stuck within his profession. He can’t seem to move up the corporate ladder no matter how much he tries, so when he is passed over once to often, he hatches a plan to change his life forever. He is a success in terms of cash and lifestyle, but he longs for something new and adventurous, so he takes his plan to his wife, Linda (Julie Hagerty) for approval. He then persuades her into one heck of a scheme, where the two quit their jobs, sell all that they own, purchase a massive Winnebago, and travel across the nation. As David sees it, it will be just like Easy Rider, a trek to learn about themselves and see the nation’s various sights, all without the burdens most people have. So the two do all of that and soon enough, they’re off on the open road, with their nest egg in tow and looking for some adventures. But their plans don’t go as expected and down the road a piece, the two realize they’ve lost it all and now have to try to piece their lives back together, from the ground up.

I am a fan of Albert Brooks, so Lost in America is a natural comedic mesh with me, I can laugh from start to finish with this one. The humor here is not always laugh out loud funny, but it is very humorous and builds up to bigger moments, which are downright hilarious. The pace is a little slow and the comedy is sometimes very subtle, but it all works well here and I think fans of Brooks will feel right at home here. This is an 80s movie that deals with 80s topics, but it doesn’t seem as dated as you might think, as all of the jokes still hold up very well. A few were funnier at the time of course, but as long as you have a grasp of 80s culture, this one won’t be out of your reach in the least. The themes explored in Lost in America have been used in films like Office Space and Fight Club, but to much different ends, of course. This is about taking control of your fate and running with it, only to suffer through all sorts of mishaps along the path. I give this release a very high recommendation, but with such an uninspired disc, I think a rental will suffice in most cases, unless you’re a Brooks fanatic and need to own this, like me.

His humor doesn’t work for everyone, but I find Albert Brooks to be hilarious and this film serves as a perfect example of that. Brooks works as a lead in the film, but also directed and helped write the screenplay, along with Monica Johnson. He doesn’t falter much in any of those tasks however, as Brooks is in top form here and really delivers a terrific all around movie. I admit that the premise and some of the aspects present are a little dated now, but they still work and anyone who remembers the 1980s will feel right at home. Brooks uses his typical brand of humor here, which means dialogue driven and low key, but it works very well, as per usual. As an actor, Brooks is classic in Lost in America, especially a couple confrontational sequences, which never fail to crack me up.

Lost in America has been given the “Criterion treatment” and that’s never a bad thing. A new 2K restoration has been used for this Blu-ray and was supervised by director Albert Brooks. Comparing it with my older DVD, the difference is nearly night and day. The visuals are clean, sharp and are simply bounding with color. This is an instance in which you take the old DVD and say “You’ve had a good run, now be gone!” Flesh tones seem warm and natural as well. While some errors do persist, namely a fine layer of grain, it’s really a testament to how good a film can look once it’s in the capable hands of Criterion. A superb effort.

The same mono track that was present on the DVD is here in PCM form. And there’s not much to talk about. It handles the dialogue reliant material, but never offers much else. I do think the music sounds a little limited, but aside from that this track is more than adequate, due to the nature of the material. The music and sound effects are well presented, but as I said, seem a little restrained at times, but not enough to lessen the experience. The dialogue is the real focus however, with crisp vocals present and no traces of distortion or harshness I could detect.

The films (and humor) of Albert Brooks is a bit hit and miss. You either love him or you don’t. I’m in the former camp. I simply can’t get enough. I’m so glad that Criterion was able to get this title and they’ve done right by it. While the supplements aren’t as robust as other titles in the Criterion library, what we have here is new and well worth a watch.