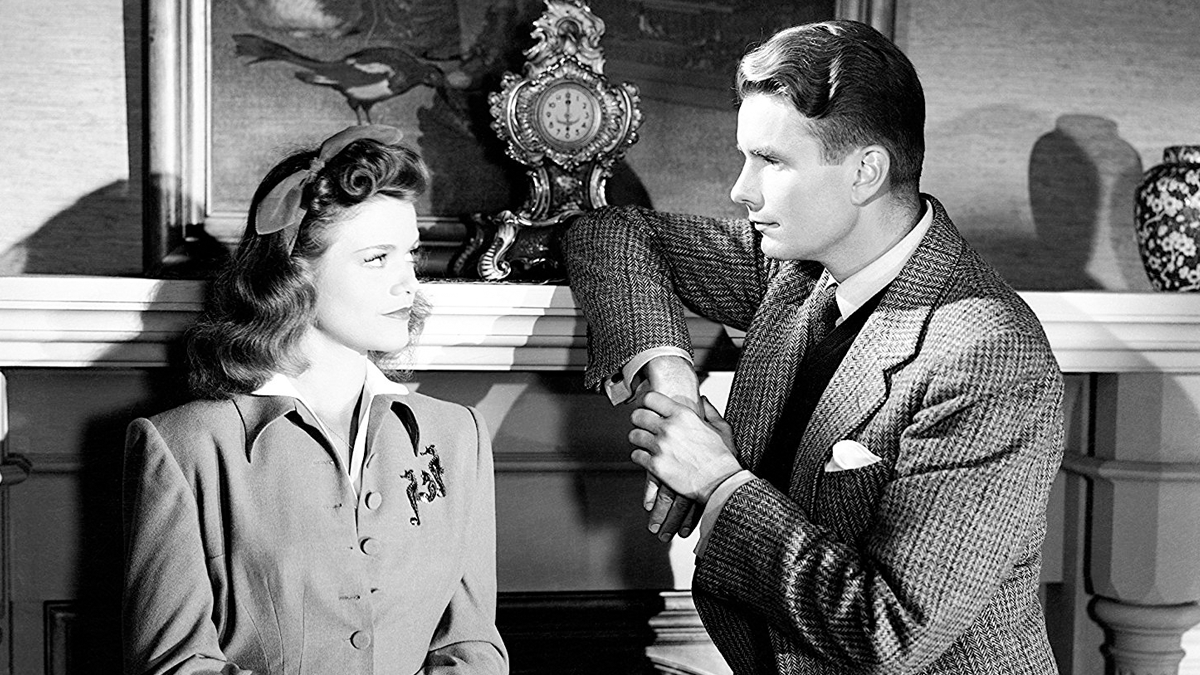 When RKO Pictures made a statement by refusing to let Orson Welles get final cut on The Magnificent Ambersons, they ushered in a new age at their company. Their new motto was “showmanship in place of genius.” They were looking to make cheap profitable pictures. They turned their eyes towards the horror genre and decided that they would create a small team, led by producer Val Lewton who had been Selznik’s right hand man. He recruited Robert Wise and Mark Dobson to help him churn out horror films quickly. These films that they created tended to have truly terrible titles thanks to the marketing department, but the films themselves have an eeriness to them and even some magisterial beauty at times. The first of these films was Cat People directed by the excellent Jacques Tourneur.

Oliver Reed (Kent Smith) meets a mysterious woman, Irena (Simone Simon) as she is drawing a panther at the zoo. He walks her home. She lets him know that he might be her first real friend. They can hear the lions from the zoo from her apartment, which she finds soothing. She grew up in a village that was haunted by tales of witches that were driven out by King James and the cat people that descended from them. Oliver invites her for dinner. The next day at his construction company job he admits that he likes the girl. He brings her a cat that had been delivered to the office, but the kitten dislikes her immensely. They go to a pet store and the animals all go crazy. She wants to exchange the kitten for a canary. They take the canary home. He asks to kiss her and she reveals that she has dreaded loving him due to her fears. They go to dinner with friends. A strange woman, with cat-like features, approaches her and speaks a foreign tongue at her. She calls her a sister. Oliver and Irena are married. Despite being married she continues to sleep alone. She plays with the canary and accidentally kills it. She feeds it to the leopard at the zoo. Due to her continuing fear that she is a cat person, Oliver recommends a psychiatrist. Her great fear is that intimacy will cause her to transform and kill Oliver. Meanwhile, Oliver begins to develop feelings for a woman from his office.

Criterion Collection have a good track record of releasing films that have had a significant impact on the art form. Watching the film, I saw what makes the film stand out and special. It is the first of the Val Lewton produced horror pictures for RKO. Therefore it is a good choice to highlight in a Criterion edition. The film never shows the audience the transformation into the creature, instead it uses shadows and sounds to cause dread in the viewer. This makes the film stand out from the films at that time and provides good evidence that it influenced later films. The film is directed by Jacques Tourneur who would go on to direct one of my favorite noir films Out of the Past. Tourneur was an excellent choice and succeeds in directing the film under Lewton’s tutelage. Tourneur paints a very pretty picture in black and white, and this film looks fantastic.

Once you get past the significance of the film in general, I think it is safe to say that the film is not frightening by today’s standards. As a horror film for today’s audience, this film will not scare anybody. Also, the idea of a cat person is pretty ridiculous so you will need to come into this film willing to look past that fact. Essentially as a reviewer based off of normal metrics, it would be hard to quantify any film called Cat People as good, but I did find it enjoyable and interesting. Once you get past the terrible idea for a film, it becomes an exercise in technique. This is where the film succeeds. In making the fear of arousal the main fear of the protagonist, it is set pretty far apart from films of that era that were dealing with censorship that would not allow people to kiss on screen or sleep in the same bed. In the use of shadows and noise the film achieves a strange and hypnotic beauty that is unlike most horror films from then or now. It essentially transcends the material to become something better. Simone Simon is great in the film, her French accent lending to her exotic and strange character.

Overall, this film is not the best film in Criterion’s amazing collection, but it is a noteworthy addition due to what was achieved with these films. It is also an enjoyable film once you allow yourself to get past the ridiculous premise.

Criterion always do a great job of explaining the steps they take to get there in the liner notes, so here it is:

Criterion are the masters at black and white restoration. The presentation of the film in 1.37:1 with MPEG4-AVC encoding is nothing short of spectacular. Every scene is sharply in focus and the stylized shadow work looks fantastic on Blu-ray. Obviously this is the best the film has ever looked. While this is not a true 4K transfer, you would be very hard pressed to be able to tell that this was done in 2K. It is pretty much flawless.

Criterion explained their work in the liner notes:

The original monaural soundtrack was transferred from a new soundtrack positive created from the 35mm original soundtrack negative at Chace Audio by Deluxe in Burbank, California, where digital restoration was also performed. Additional restoration was undertaken by the Criterion Collection. Clicks, thumps, hiss, hum, and crackle, were manually removed using Pro Tools HD and iZotope RX.

Similar to the visual treatment, Criterion have done an excellent job here. This film relies very heavily on sounds – drips, steps, animal noises. It all sounds great. Obviously as a mono soundtrack, there is no real directionality. That doesn’t matter, though. Criterion have done a great job here and the film has benefitted from the fantastic work they put into it.

Cat People is simply a bad idea for a film that is executed in a way that elevates the film. This movie should be terrible, but Val Lewton injected enough of himself into the film to make something much better and strangely hypnotic. Jacques Tourneur did a fantastic directing job that helped to elevate the form. I am glad that Criterion have brought it to Blu-Ray, and the supplemental materials are absolutely fantastic. The full length documentary is worth the price of admission and gained this film extra credit. If you are a fan of the genre, there is a lot to enjoy here. If you are not a fan of the genre, I cannot see this as changing your mind. This is essentially a B-movie, with an A transfer, and A+ supplemental materials. Recommended.