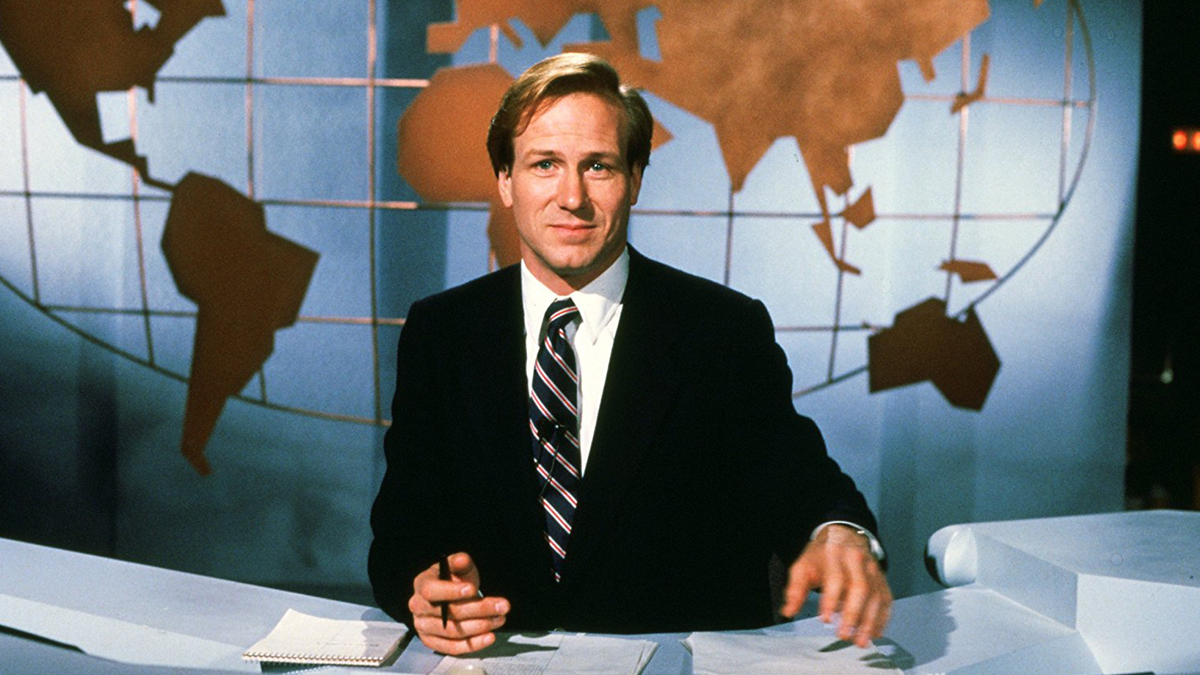 In 1987, James L. Brooks released the film Broadcast News to wide acclaim. It had been five years since he had swept the Oscars with Terms of Endearment, and during that time Brooks had dedicated his time to creating a film that would really depict what life in the newsroom was really like. He based the protagonist of the film, Jane Craig, off of a news producer he had befriended named Susan Zirinsky. Through extensive interviews and their friendship he developed the script for Broadcast News and then filmed it with a great cast with Holly Hunter, William Hurt, and Albert Brooks. It went on to be nominated for seven Oscars, but took home none.

The storyline of the film revolves around Jane Craig (Holly Hunter) a brilliant career-driven Washington D.C. based broadcast news producer. She is close friends with the former school Valedictorian news reporter, Aaron Altman (Albert Brooks,) who telephones her regularly to talk about current events, career goals, and self-analysis. When Jane speaks at a convention for a bored audience, she meets the lone attendee who sticks around, Tom Grunick (William Hurt.) Tom has always been able to skate by in his looks, but is not nearly as intelligent as all the people that surround him in the newsroom. This is why he is a news anchor and routinely promoted. After a night of talking together, Tom tells Jane about his insecurities related to his unintelligence, and when she offends him he leaves her hotel room instead of sleeping with her. He then informs her that he will be working at her station as the new anchor. The film follows the career trajectory of Jane, Tom, and Aaron as they also form a love triangle with Jane in the center. The hardest decision comes down to if she can find happiness with either one of these men for different reasons completely.

Broadcast News is a pretty heartwarming affair, which should come as no surprise to anybody who enjoys other films by James L. brooks (my personal favorite being As Good As It Gets.) Brooks is excellent at being both funny and endearing in one fell swoop. His characters are so flawed and seemingly normal, it is hard to dislike anybody that is put on-screen. Under a different writer or director, any of the characters could become caricatures, but Brooks knows that people are not just one thing. For example, Tom is not as smart as the other characters, but he is the most successful and least neurotic. I love when writers make characters more dynamic and Brooks’ writing talent shines in this movie. The film also does a great job of portraying a news room at a time when the twenty-four hour news cycle was causing massive layoffs at newsrooms across the country.

The acting is fantastic across the board with all three members of the cast receiving nominations for Best Actress and Best Supporting Actor. My favorite actor in the film is Albert Brooks, but that is just because I pretty much love him in everything. William Hurt is at his most likable in the movie. Holly Hunter is great in everything and nails it in this one. Not a bad performance amongst them, and I really enjoyed the small cameo by Jack Nicholson. Most importantly, the film has an absolutely fantastic ending that I really could not have been happier about.

Broadcast News is the type of sentimental well-written comedy that does not get made as much any more. Sometimes it is just a breath of fresh air to watch something that does not in any way feel cynical. This movie comes highly recommended.

Criterion did an extremely capable job on the brand new 2K digital transfer of the film. The movie looks essentially reference quality. In the booklet provided it details the transfer by saying, “Supervised and approved by director James L. Brooks and editor Richard Marks, this new high-definition digital transfer was created on a DFT SCANITY Film Scanner in 4k resolution from the original 35mm camera negative, and color corrected on a Baselight Eight in 2K resolution. Thousands of instances of dirt, debris, scratches, splices, warps, jitter, and flicker were manually removed using MTI’s DRS system and Pixel Farm’s PFClean system.” Criterion always try their best to preserve films at the highest possible resolution. Unless they do a true 4K transfer (which is unlikely since this transfer is out there,) this will be the definitive presentation of the film.

This is a well done, albeit not very intense 2.0 DTS-HD Master Audio track. From the booklet that accompanied the film, “The 2.0 surround soundtrack was remastered at 24-bit from the original 35mm Dolby A magnetic tracks. Clicks, thumps, hiss, and hum were manually removed using Pro Tools HD. Crackle was attenuated using AudioCube’s integrated audio workstation.” Dialogue is very clear and the compositions by Bill Conti sound great as well. This is essentially a dialogue driven affair and directionality is not used basically at all. I can’t think of anything wrong whatsoever with the track. Reference quality as per the norm with Criterion.

Broadcast News is the type of fantastic sentimental comedy that James L. Brooks is best at making. It was nominated for every type of Academy Award for every good reason. Criterion have done a solid job on the transfer of the film and have provided excellent supplements. If you have a tender bone in your body, Broadcast News should be up your alley.