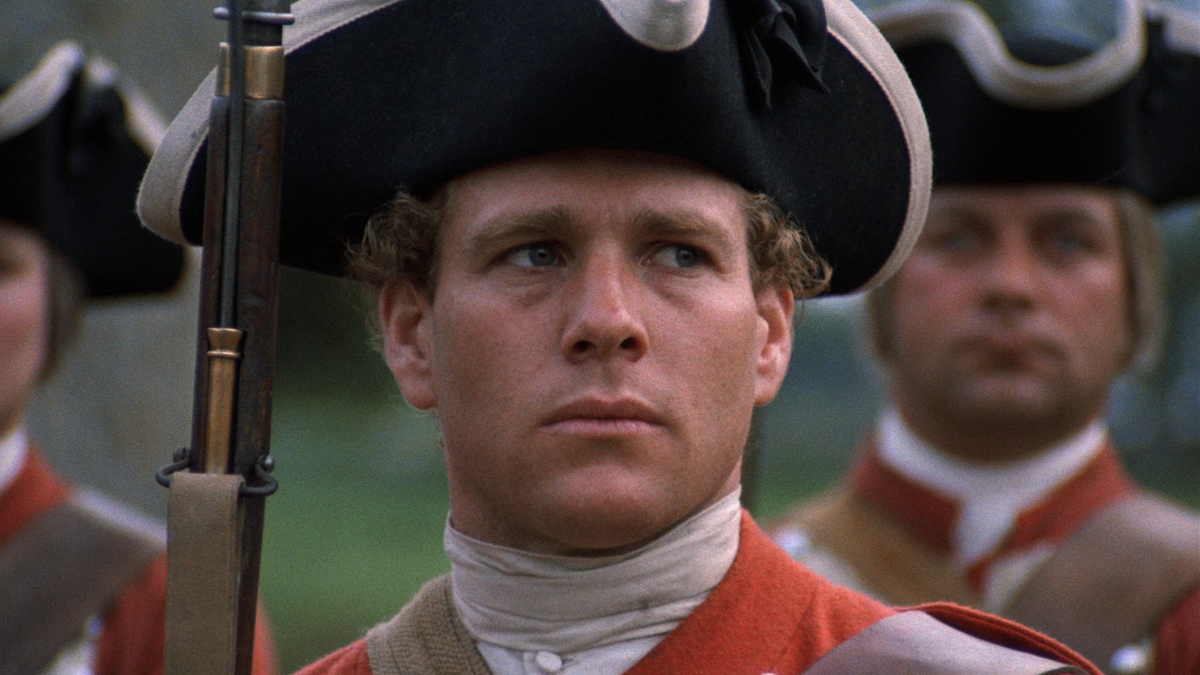 “Sir, let those laugh who win.”

Barry Lyndon begins with the hero of the film’s father reaching an early demise in a duel. Irishman Redmond Barry (Ryan O’Neal) grows up fatherless on a farm following his father’s death. When he falls in love with his cousin Nora Brady due to her advances, Barry is thunderstruck to see that his cousin begins to entertain another man, British Captain John Quin. Filled with rage, Barry throws a glass of wine in John’s face and challenges him to a duel. John tries his best to bow out gracefully, but Barry refuses to back down. In the duel, Barry hits John with his shot and flees from his life there. On the outskirts of town he loses the money his mother had given him and his father’s sword to a couple clever thieves. Destitute and alone, Barry joins the British army as it goes to war against Prussia and France.

What is described above is just the first act, but I would not want to ruin the film’s second or third act. The rest of the film will involve his rise in society as he is attached to a wealthy widow but I do not want to ruin the circumstances in which any of this occurs.

I had held off on watching this film for years and years. I have purchased it on every format – VHS, DVD, standard Blu-ray, and now on Criterion Blu-ray. I was genuinely excited to sit down to watch the film because I knew I would finally mark it off of my small list of Kubrick films I have not seen. As I watched the film, I was struck by how Kubrick operated in comparison to any other director. Kubrick is in many respects the greatest filmmaker of all time and this fits into his repertoire well because of the techniques he uses on this film. First and foremost, Kubrick was a storyteller and the story of Redmond Barry’s rise and decline from the novel by Thackeray is very strong. The story is depressing overall, but the first half of the film has great moments of levity and humor. Kubrick knows how to mine those details to manipulate the audience into feeling different things as the film progresses.

The second thing that struck me from the film was the sense that the audience truly has traveled back to the Eighteenth century and there is no electric light to be found. Kubrick achieved this by using natural light for all of the exterior shots and candle light for all the interior shots along with some manipulative techniques to make unnatural light look completely natural. This would not be possible to film at the time if Kubrick had not performed the necessary tests on a lens that NASA had invented that captured light more quickly.

The third thing to notice about the film is the attention to detail from Kubrick. Kubrick used real locations as opposed to sets and based the look of the film off of art pieces from the time. The costumes were based off of paintings from the time or were truly made in the time of the film. The screen is constantly filled with the finest details that only a true genius could ever cobble together. This has a cumulative effect that can only be understood by viewing the film. These details transport the viewer.

In short, Barry Lyndon will not be every viewer’s favorite film due to the length and depressing nature of the film. It has a slower pace than many films and therefore will lose some viewers. That said, it is essentially a perfect period drama from one of the true masters of the cinematic craft in great form. Kubrick does a solid job of drawing good performances from his cast and telling a unique story in a unique way. I did not know what to expect from this film and had honestly for years avoided giving this film my time. Now that I have seen it, I look forward to seeing it again.

There is only one way to watch this film now that Criterion have released it with a new pristine 4K digital restoration that causes the film to look the absolute best it could’ve ever looked. This is easily one of the most impressive transfers that Criterion have ever produced. This film relies on various techniques that are hard to digitize: namely natural light and soft focus. Kubrick pioneered the use of a lens that could capture light more quickly which allowed him to light interiors with candles and use solely natural light throughout the film. The effect is tremendous with certain scenes feeling incredibly separate from the time we live in. This film is painstakingly put together by one of the absolute greatest filmmakers of all time with help of cinematographer and collaborator John Alcott. Visually it is stunning and it deserves the accolades that have been thrust upon it for its visual style. This transfer is one of the crowning jewels in Criterion’s Collection. Watch it on a big Ultra HD screen to really get the impact of the work they have put in.

Criterion has provided both DTS-HD MA Mono and DTS-HD MA 5.1 tracks for the film. As can be expected, both tracks are extremely capable. The 5.1 track gives the film extra depth of field, but there is no noticeable use of the surrounds aside from the musical field which has been given a solid lift from the dialogue track underneath. I switched between the two tracks and both are good choices, but the 5.1 track wins out due to its attention to the incredible classical numbers from Handel, Mozart, Vivaldi, Schubert, and Bach for the film and they sound gorgeous. These string arrangements help to make this film feel just as much a part of the setting as the cinematography.

Barry Lyndon had been on my to-do list for over a decade and a half. This is an incredible achievement in cinematography and setting, but the depressing nature of the second half may hurt the chance of repeat viewings. Watching the film, I kept feeling like I was learning so much of what that century must have felt like. Period dramas are definitely not something I am typically interested in, but Kubrick pulls off something miraculous here. Kubrick makes a depressing three hour movie about a villainous Irish rogue in the eighteenth century, and I realized today that I want to rewatch it soon. That is miraculous.

Criterion have provided one of the greatest 4K transfers in their entire collection along with an absolutely amazing additional Blu-ray disk full of supplement worth watching and re-watchings. This is a job well done and raises this purchase to an absolute no-brainer if you are a fan. Kubrick in Criterion can pretty much be guaranteed a perfect score from me!