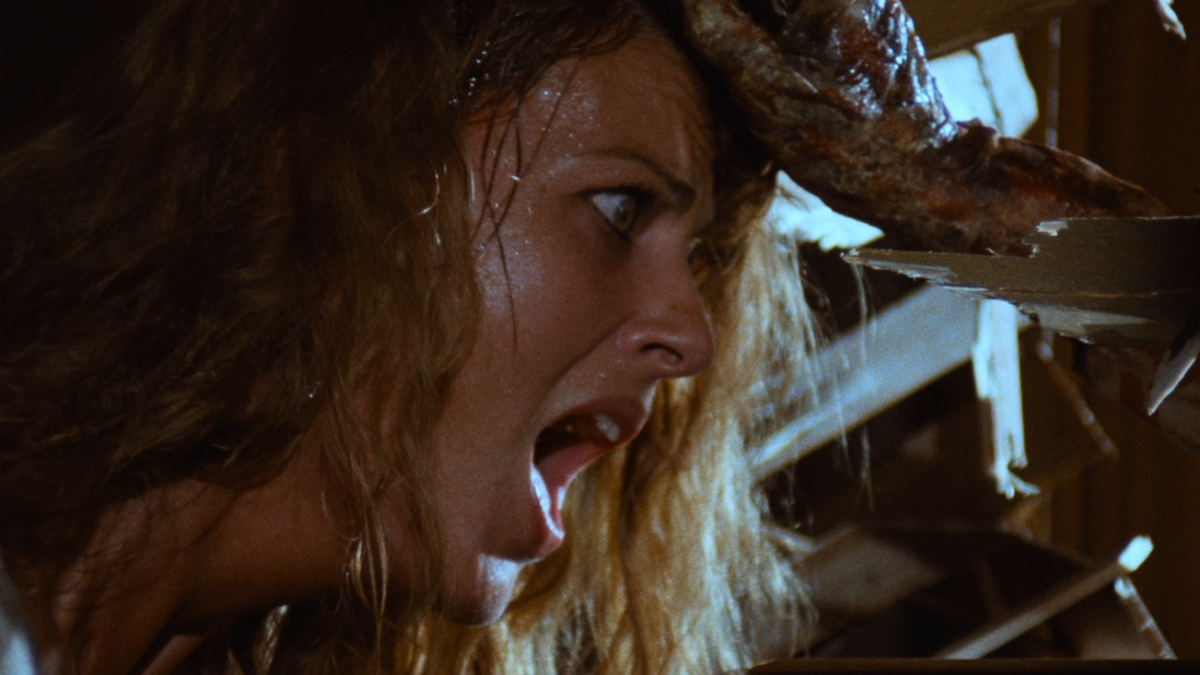 Blue Underground is a film distribution label that has been around since 2002. They specialize in foreign horror and exploitation films. They have acquired some incredible titles in their library over the years including the first Blu-rays of numerous Lucio Fulci and Dario Argento films. Recently, Blue Underground has gone back to some of their better-known releases and given them brand new 4K transfers. One of the titles that they recently gave the new 4K treatment was the beloved and notorious Lucio Fulci film Zombie (or Zombi 2 as it was known in Italy.) This film has gained a reputation over the years for being one of the first horror films to not turn the camera away from the carnage that ensues. There is no doubt that this film is not for the faint of heart and that it is very gory at times. It is also one of the landmark horror films, representing a shift towards more grisly and grim horror films to come afterward.

The film opens with a gun pointed at the camera. The gun fires a shot into a head of a body wrapped in sheets before it can finish rising up. A mysterious man in shadows says that the crew can take the ship. The film then cuts to a sailing boat arriving in the port of New York City. The ship is adrift with no evident crew. The port police board the ship and while investigating the ship they are attacked by an obese zombie. One policeman is killed, and the other policeman shoots the zombie off of the ship. British news reporter Peter West (Ian McCullough) is assigned to find out what occurred on the ship. At the boat, Anne Boels (Tisa Farrow) is questioned by the police. Her father had owned the boat and had set sail for the Antilles three months earlier. At the morgue, the dead policeman slightly moves his hand. Meanwhile, Anne Boels sneaks past the police onto her father’s ship to investigate and meets Peter West who is also investigating. Anne’s father had left a note on the ship that he had taken ill on an island named Mantou. West receives permission to pursue the story, so they take a trip to the Bahamas to make their way to Mantou. Arriving in the Bahamas they charter a boat run by Brian Hull and Susan Bark that are planning a two month cruise of the islands. Brian warms that the island is known by natives to be cursed. They have no idea what lays in store for them on the island of Mantou. Mantou is facing a plague that seems to bring the dead back to life. A doctor and his crew are the only people helping to keep the island from becoming overrun.

This movie had evaded me for years. The iconic image from the film’s VHS cover of a decaying zombie with worms in its eye-sockets kept me away. In all honesty, this image seemed grotesque and kept me from viewing the film for years. It is warranted that the movie has detractors who cannot get past the gore. It has some sequences that are incredibly violent and in some cases are pretty gross. That is not what defines the film in the eyes of its champions. The film is defined by a singularly original vision from director Lucio Fulci. A couple years ago I watched Don’t Torture a Duckling and that release had shown me just how capable Fulci was behind the camera. He didn’t reach his full potential until he made Zombie. The film has some of the most incredible in-camera effects ever conceived at the time. There is an underwater scene involving a shark and a zombie that best sums up the ethos of the film: it is a scene that involved real danger for those being filmed (stuntmen and a live shark) with the promotion of a fictitious conceit (zombies) with natural beauty (a topless diver and the natural beauty of the ocean near San Domingo) with gore (the severed arm of a zombie.) This scene showed Fulci at his bravest and most dynamic.  It also explains why the fans of the film are legion. This film is not like other zombie films. It is prettier, nastier, more violent, more sexual, and more audacious than numerous zombie films rolled into one. It follows its own logic and carries the viewer along.

The film manages a difficult task. On a shoestring budget with an untrained makeup effects crew, they made some of the most memorable makeup effects of all time. The zombies in Fulci’s film are not keeping themselves together. They are the decaying rotting masses risen with a power that can only be destroyed by heavy blow to the brain. Where other zombie films had laughable zombies with blood around their mouths and pale makeup, the zombies in Fulci’s film can be hard to look at (and sometimes are very funny to look at also.) Like the rest of the film, it is over the top. There is no holding back.

The film benefits from one of the most beautiful surroundings for a horror film – the tropical island of San Domingo. With the aid of cinematographer Sergio Salvati, Fulci filmed the surroundings in wide lenses. The effect is that the film has the look of an epic – a wideness to the image that gives enough room to feel a sense of place, I am not lying when I say that the film is very pretty at times which I think adds to the strange allure of a film that is just as likely to show a wooden splinter shoved through an eyeball as a beautiful shot near an ocean.

The film features fine performances throughout the film. The music by Fabio Frizzi has become iconic in the same way that horror fans love Goblin’s scores for Romero and Argento films. This is a case where seemingly everything works together to create something better than the sum of its parts.

Overall – this is a tough as nails horror film that has withstood the test of time. It is still as ghastly and beautiful as it was in 1979. Whether or not this film appeals to you should be pretty obvious from my review above. For myself, this ranks as one of the best zombie horror films, and best horror films, that I have seen. It is completely deserving of the classic status and notoriety it has attained.

Blue Underground had released a 2K version of this film a few years ago on Blu-ray, but I did not purchase that release, so I will only be able to talk about the technical specs of their new 4K release. The new release looks absolutely stunning. The 2.40:1 aspect ratio is wide, and the film has fine detail that fills the screen. There is a fine level of grain over the film. Cinematographer Sergio Salvati shot the film using wide lenses and captured some remarkably beautiful locales. It does not look like other horror films. This new transfer is essentially flawless. Blue Underground have cleaned up the image without making it look soft. I watched the film on my UHD 65” TV and it looked exceptional. Fans need to upgrade.

Blue Underground have provided LPCM Mono and DTS-HD MA 7.1 tracks for the film in both English and Italian. I watched the film in English with the surround track and thought that it sounded wonderful. The 7.1 track gives lots of room for directionality and gives the iconic score by Fabio Frizzi an overhaul. All of it sounds great. There are no issues here.

Zombie is a classic horror film that still has the ability to shock. It’s an audacious film that set the bar for grim and grisly films that has rarely been eclipsed. This obviously is not for the faint of heart (or weak of stomach,) but dedicated horror film aficionados will want to put this film on their shelves as soon as possible. The new 4K scan by Blue Underground is remarkable and the disks are full of supplements to keep you busy for hours. It is also great to have a CD containing the soundtrack as an added bonus. This stands as one of the best horror releases of the last year and one of the few films that I feel is worth the perfect score.