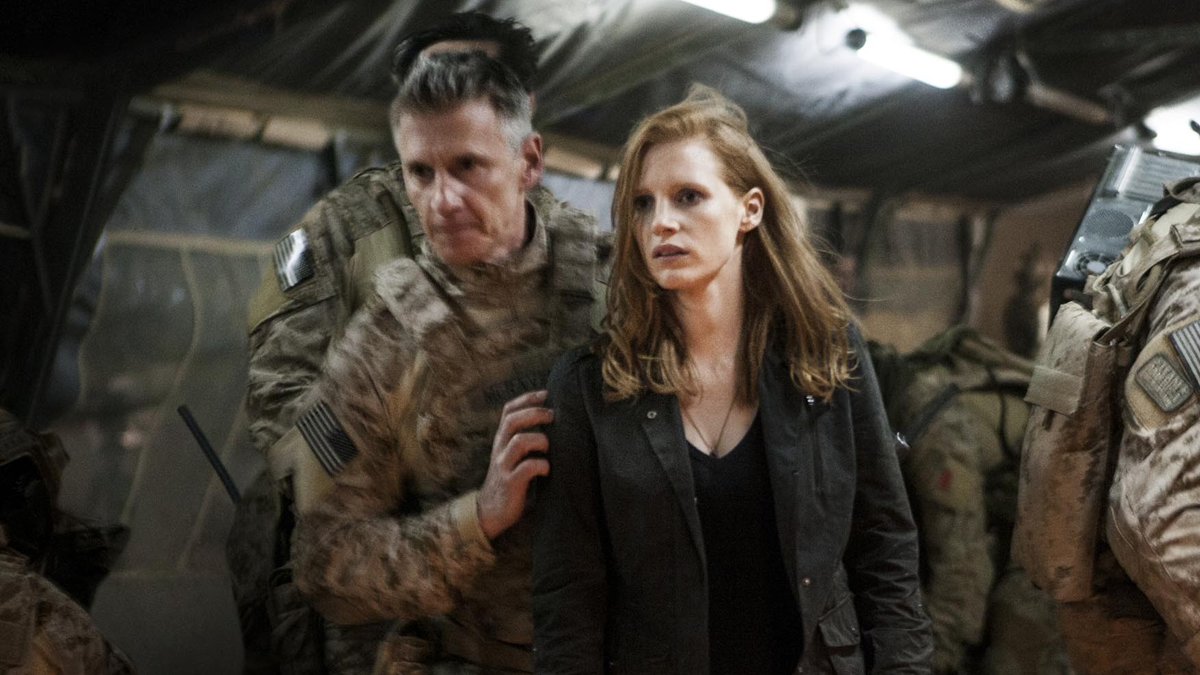 I’m not and never have been a member of the US Armed Forces.  My father was, a graduate of the United States Naval Academy, he was a Captain in the Marines.  So with that said, I’m not really that well-versed in the way things work when it comes to our military.  More on that later.  I suppose I’ll address the elephant in the room and flat out say that it’s about time a movie like this came out.  Yes, September 11, 2001 was a tragic and horrific day for everyone and it took a few years for some movies to come out about the victims, but the culprits – well here we are.  Osama Bin Laden was the man behind the 9/11 attacks, but also a multitude of other acts of terror: the bombing on the World Trade Center in 1993, the attack on the USS Cole and others.  It was 9/11 that was his most “successful” endeavor and also the one that really pissed us off.  Zero Dark Thirty tells the story of the more than decade long hunt for this terrorist, and how his ultimate fate came to be.

Maya (Jessica Chastain) is a CIA operative who has one thing on her mind – find Osama Bin Laden.  She was recruited out of high school and with her unwavering attention to her job and its detail, she’s determined to fulfill her mission.  She sits in on torture sessions led by Dan (Jason Clarke), someone who knows what to say and what to do to get what information they want.  Eventually the subject spits out a name and Maya pursues the lead, convinced that it’s a key piece in the Bin Laden puzzle.  Pestering her superior Joseph Bradley (Kyle Chandler), he eventually gives in and it turns out that the lead is legitimate.  Of course, going through the red tape is part of making things happen, after all the United States military can’t just go around shooting people and then shrugging their shoulders and saying “Whoops.” No it’s not like that.  However, after all the i’s are dotted and t’s crossed, the moment has arrived and the time is now.

Zero Dark Thirty is a long, brooding process of a film that I both enjoyed and relented at the same time.  Allow me to explain.  First off I’m a big fan of Kathryn Bigelow, as a female director in Hollywood, she’s not only been able to score a Best Director Academy Award, she seems to have more of an innate view of the military than many of her male counterparts.  The movie is well-crafted, tense and true to the real-life events that preceded it.  Much was made of Jessica Chastain’s performance as Maya and I’ll admit that she was good, but I feel that the Oscar was better served in Jennifer Lawrence’s hands.  As Bigelow showed us in The Hurt Locker, there’s always a tale to tell and Zero Dark Thirty is it.  I don’t know how many repeat viewings of this I could stomach, the movie is hard to watch and as tense as they come.  But I’ll digress and say that the performances are strong and it is probably a movie that everyone should see.

Sony brings Zero Dark Thirty to Blu-ray in a gorgeous-looking 1.85:1 HEVC 4K transfer that’s nearly perfect in every way.  Some people like the “documentary” look and feel of the handheld cameras (think Saving Private Ryan) and some despise it. I prefer the more natural, realistic feel of the way the film was shot.  The image seems to be a bit on the saturated side with Chastain’s porcelain white skin contrasted with the dark blue sky.  Certain scenes, such as the torture sequence, has a darker look and feel to it, almost gritty, that really looked good on screen.  As expected, detail is nearly perfect as we can read even the most minute and intricate things on screen.  Contrast and black levels play off one another too.  Those looking for an excellent transfer need look no further.

If ever a movie should embody sound, it’s one that features things being blown up and guns being fired.  Zero Dark Thirty has a little bit of everything and it all sounds amazing.  Included here is a new Dolby Atmos track that replaces the DTS HD Master Audio one found on the Blu-ray. Dialogue sounds sharp and crisp even if some of the actors seem to mumble their lines.  Chastain’s vocals sound sharp and rigid.  Towards the end of the film, when the action really gets going, we’re treated to a slew of surround sound with helicopters, gun shots and everything in between that make for a very robust and entertaining mix. Again, I draw a comparison to Saving Private Ryan and while not as “in your face” as that title, it does do the film justice and once again, viewers will not be disappointed.

Unfortunately there are no new supplements to this edition, what’s included is what was present on the previously-released Blu-ray.

At 157 minutes, this one is an investment. But it’s a good use of your time. It’s about as authentic as it gets and watching the film a few years later, we’ve come to know some of these “background players” as bigger stars in other films. Kathryn Bigelow’s film is a taut, well-made film that’s sure to entertain (not please, but entertain). The Ultra HD/4K version ups the ante with superior picture and sound, but nothing new in the supplemental department.