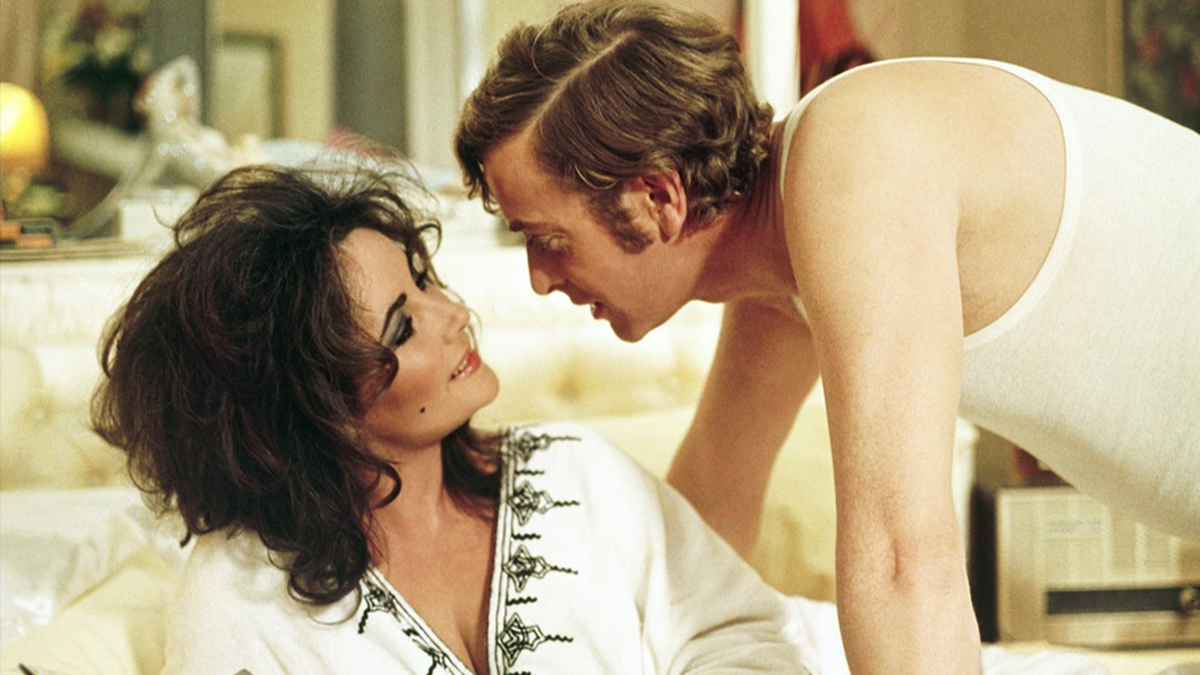 wilight Time has developed a solid reputation for providing film lovers with often neglected films from yesteryear. I love the label and try to watch as many of their films that they release as possible. Recently they released X,Y, and Zee starring Michael Caine, Susannah York, and the dynamic Elizabeth Taylor. While the film’s plot did not look like my typical fare, I sat down to watch it based on the cast’s pedigree.

Michael Caine and Elizabeth Taylor play British married couple Robert and Zee Blakeley. At a party they attend together, architect Robert meets boutique dress shop owner Stella (Susannah York.) Zee notices the flirtation between Robert and Stella at the party and intervenes. Zee talks to Stella who reveals that she was also married, with two children, and her husband was in the country. Robert makes plans with Stella to meet the next day, setting in course the plot’s machinations. When Robert and Stella meet up, Stella reveals that her husband had actually passed away and that she had fibbed to his wife. Their flirtation leads to them kissing at the end of the evening. Zee begins to plot to dominate her husband’s mistress through any means necessary.

Elizabeth Taylor was 40 years old, Michael Caine was 39, Susannah York was 33. Elizabeth Taylor looks like she had come from a different era despite how close in age she actually was to her counterparts. Her performance is the main reason to watch the film. She is absolute dynamite in the role of Zee. She is equal parts seductive and repulsive – the type of crazy that people try to only date once in their life and pray to God that they don’t marry. She plays the role loosely and looks like she is having a ball devouring her lines. Up to the task of playing her philandering husband is the great Michael Caine. I found his performance worked well in the film. Caine has been reliably great over the years and this is a markedly different portrayal of adultery than in Hannah and Her Sisters or Alfie. This casts Caine in a more vicious form of relationship turmoil, like an animal lashing out. To round out the cast is the underrated Susannah York. I really enjoyed her performance in Robert Altman’s Images, and she does a fine job in the film as the most forlorn character in the film. She is subtle, sad, and silent to Taylor’s loud, exaggerated, and intoxicated performance. The more I write about it, there is not a bad performance in the film. Everybody shows up and convincingly delivers even if Elizabeth Taylor’s scene chewing will definitely be what is most remembered from the film.

The film has an engaging screenplay by Edna O’Brien whom Philip Roth regarded as one of the finest literary novelists. This film has no such aspirations. The script for the film is the type of tawdry melodrama that appeals to some and will turn off others. It’s not going to enter the pantheon of great literary films. This film is designed to be a guilty pleasure. Depending on your enjoyment of such things, I would recommend watching or avoiding the film. I once asked Julie Kirgo of Twilight Time what her favorite guilty pleasure was. She told me that at her age there was no such thing as a guilty pleasure and advised me that pleasure was nothing to be guilty about. While this film was definitely not perfect, I still enjoyed it. I also enjoyed the score by Stanley Myers which bookends the film’s credits and occasionally shows up in the film. Harpsichord is always a great sound to my ears.

Columbia Pictures/ Sony have provided an excellent 1080p transfer of the film to Twilight Time. The transfer looks great. The film itself is very visually appealing, largely due to the prevailing fashion sense of the time. Everything, from the wallpaper to the dark mahogany rooms and clothing, is very much of its time. 1972 was so close to the late sixties that it had a lot of fashion carryovers from that time. Like watching the show Mad Men, it made me want a cigarette and a heavy drink (even though I am currently a non smoker.) Sony has always proven themselves very adept at film restoration and they do a solid job here, this film does have some specking, but nothing that will dissuade a fan from enjoying it.

Twilight Time has provided an English DTS HD-MA 1.0 Track. The dialogue track of the film is a little bit soft-loud. I found myself adjusting the volume fairly often. The music in the film is lush and enjoyable. Stanley Myers composed the music for the film and it is one of the highlights of the film, even though it is only intermittently employed. I found that the rock and roll song that Zee kept playing on the record player was a little abrasive, but I guess that was the point. Overall, this track does a solid job of recreating the original sound field, but the soft/loud dynamic was a little distracting for me.

X, Y, and Zee is an interesting film. The pacing of the film is slightly off and slows down the movie a little. The subject matter is definitely fun and a little bit scandalous at times. The film is lifted up by the three strong central performances with an absolutely outrageous performance by Elizabeth Taylor. While this type of movie is not something that I would typically go for, I couldn’t look away and the film held my interest. If you like these types of movies, this should be a real winner for you. Twilight Time have provided a great looking transfer that should please fans.