On Halloween, crowds of people flood a small rural town to attend the Mountain Man Festival. The woods are overrun with costumed freaks, but not all of the freaks are out of town visitors. A family of inbred of cannibals also happens to inhabit the area, so the tourists face some potential danger. A group of college kids is in town for the festival, but they soon cross paths with the cannibals and the blood begins to flow like wine. The cannibals are led by Maynard (Doug Bradley), who isn’t as inbred as his kin and devises the blood soaked plans to kill off the visitors. What should have been a night of booze, drugs, music, and sex quickly takes a dark turn and the group is forced to fight for their lives. But can these spoiled college kids survive a night against the hill people or will their entire party be fodder for the cannibals?

Those lovable inbred mountain folk are back for a fifth escapade, but does Bloodlines get the Wrong Turn series back on track? While the original Wrong Turn was rock solid horror fun, the franchise has slowly slid into mediocrity, a trend that sadly continues with this fifth installment. The story is paper thin, which would be fine if the hillbilly mayhem was up to snuff, but not even the carnage delivers in Bloodlines. A couple of creative kills aside, even the body count in Wrong Turn 5 is forgettable, with laughable gore effects and “been there, done that” murder sequences. It is clear the budget involved was minor, but even so, the special effects are poor, especially the makeup work on the inbred goons. You want your bad guys to at least look cool, but here they look cheap and ineffective, not good news. The cast is bad as expected, but at least some of the females look good and were willing to pop their tops, so some nice racks are on showcase. But even some perky breasts aren’t enough to save Wrong Turn 5, so unless you are just addicted to hillbilly horror, you can leave this one alone.

Wrong Turn 5: Bloodlines is presented in 1.78:1 widescreen. The film might have been low budget, but this transfer looks terrific. The visuals are so sharp, the flaws in the special effects become apparent, in fact. This is mostly seen in the makeup work, though it is infrequent. The image is sharp and shows a lot of detail, even in the darker scenes. In other words, contrast is spot on and colors skew dark, but still look as intended. In the end, a great looking visual presentation.

The included DTS HD 5.1 soundtrack is good, but not memorable. The surrounds get used often, but the result isn’t that dynamic and never really stands out. The eerie atmosphere of the woods isn’t used to the fullest, so you won’t feel like you’re out in the creepy rural world of the film. This is a shame, as tension could have been ratcheted up and the overall atmosphere could have been much improved. The music sounds good and dialogue is always clear, however. This release also includes subtitles in English, Spanish, and French.

In addition to a DVD version of the movie and a digital copy for portable devices, the extras include director’s audio comments and a trio of behind the scenes featurettes. 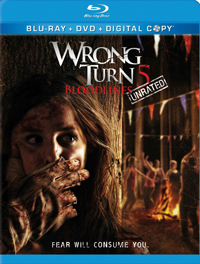