Ralph has been a video game icon for decades, but he is more infamous than famous. He struggles being a villain however, an issue not even his numerous Bad Anon meetings can smooth over. After all those years of being the bad guy in his game, he decides to turn things around and become a hero. In order to find a hero’s path, he embarks on an adventure to prove himself as a hero and show the world his true spirit. His first attempt involves the first person shooter Hero’s Duty, but he clashes with the tough as nails military lifestyle. So he winds up in a children’s race game called Sugar Rush, where he meets a glitched character named Vanellope von Schweetz. Just as Ralph wants a chance to be a hero, Vanellope just wants a chance to race, to show the world that she is more than a glitch. While Ralph’s journey is a noble one, his absence from his home game causes problems and soon the entire arcade is threatened by a dark force. Can Ralph, even with the help of his new friends and old comrades, save the arcade and be the hero at last, or is he destined to once again simply wreck things?

While Disney has relied on Pixar’s ouput to remain to remain the top animation studio in recent years, Wreck-It Ralph hopes to prove that Disney itself can still deliver the goods. As someone who is a devoted gamer and loves computer animated features, Wreck-It Ralph was tailor made for viewers like me. This movie is packed with video game references, some subtle and others not so much, with appearances from countless famous icons throughout. But even for non gamers, Wreck-It offers up a good story, some hilarious moments, and beautiful visuals to soak in. I don’t think I would rank it with Pixar’s best features, but Wreck-It Ralph is a terrific movie and shows Disney is still an animation powerhouse. The movie benefits from some excellent voice talent as well, with John C. Reilly, Jane Lynch, Sarah Silverman, and others present and in fine form. I had a blast with Wreck-It Ralph in theaters and it was just as much fun the second time around. This four disc collection offers up a superb treatment with assorted formats and ample extras, so fans should be thrilled. Whether you love video games or have never picked up a controller, Wreck-It Ralph is great entertainment and earns a high recommendation.

Wreck-It Ralph is presented in 2.40:1 widescreen. This release includes both standard and 3-D versions, but for this review I watched the standard edition. The movie looks amazing, with crystal clear visuals that showcase immense depth and detail. Even minor visual cues stand out, which really allows the film’s world to come alive here. The various game worlds look excellent, with the varied visual styles offering up plenty of details to look for. Suffice it to say Sonic the Hedgehog has never looked this good. The colors are bold and vivid, contrast is even handed, and I saw no flaws whatsoever. The movie looks simply spectacular and fans are in for a real treat here.

A DTS HD 7.1 soundtrack is offered and of course, it sounds quite great. The movie has a lot of surround presence, such as the Hero’s Duty explosive audio, as well as more subdued, but just as important sound elements. So yes, your home theater will spring to life and the surrounds will get a nice workout, but this isn’t just a loud mix. The subtle cues are well handled and general atmosphere is effective, so the track is creative and memorable. The music is well placed and supports the movie quite well, while dialogue is clear and always easy to decipher. This release also includes French and Spanish soundtracks, as well as subtitles in English and Spanish.

This release includes the Paperman theatrical short, an intermission (when the film is paused) guide to the film’s game references, and a special look at the video game worlds within the movie. Other extras include deleted & extended scenes, original commercials for the film’s games, a DVD version of the movie, and a digital copy for portable devices. 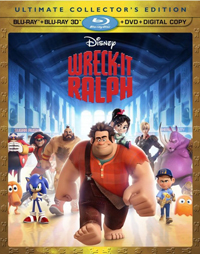