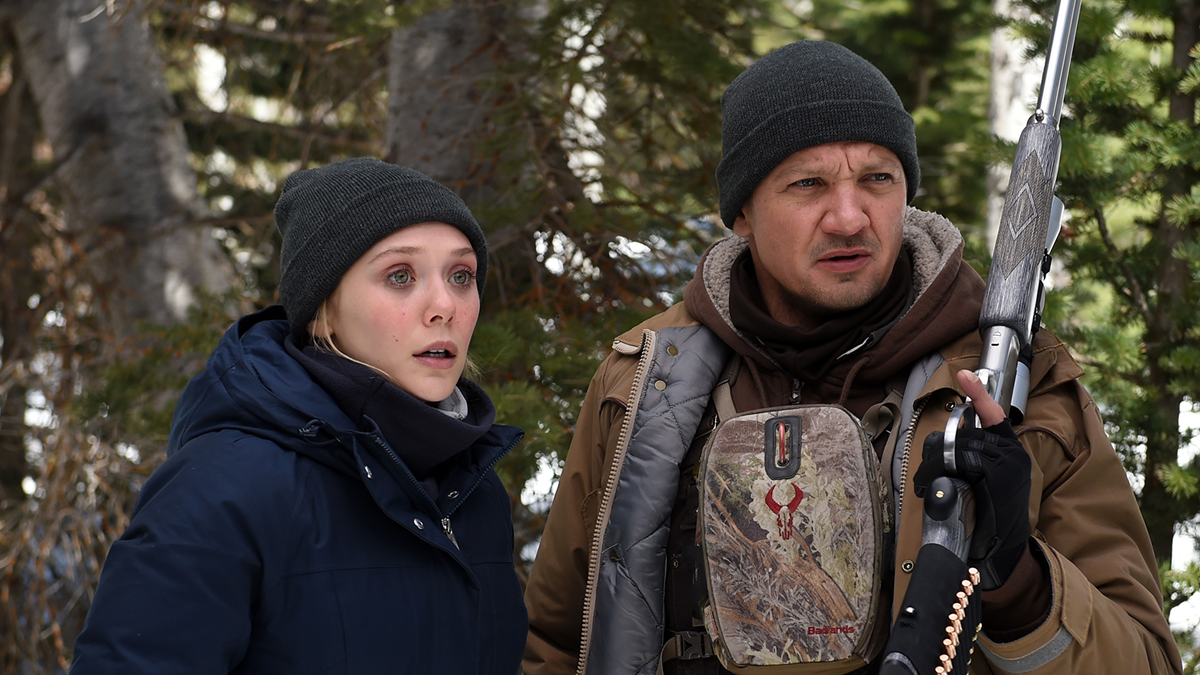 With this film, I think it is pretty safe to say that best the new screenwriter of the last few years is Taylor Sheridan. I loved his first two films that he wrote – Sicario and Hell or High Water- and this film rounds out the trilogy of rough and tumble American films under his belt. It is another excellent achievement. In this case, he not only wrote the film, but directed it as well. If I was any director in this country right now, I would be getting nervous that this man is directing his own material. The middle man has been entirely cut out and these lean mean pictures are some of the best American filmmaking in the last couple decades.

The film begins with a beautiful young Native American woman (Kelsey Asbille) running through a snow covered clearing barefoot at night. It is obvious that she is afraid of something and running for her life. She clutches her chest and falls to her knees with blood running down her nose, drawing her last breath. In the woods the next day a professional tracker for the Fish and Wildlife Service named Cory Lambert (Jeremy Renner) kills a troublesome wolf. Returning back into town he picks up his young son, Casey, from his estranged Native American wife. He receives a call from the Wind River reservation from his wife’s father. The man informs him that there is a mountain lion that is disturbing the local order of things, so Cory hops on his snowmobile and follows the tracks. Seeing a new set of tracks and some blood he stumbles upon the body of the young Native American woman. It turns out that she is the daughter of a close friend and her name was Natalie. With no jurisdiction of his own, he offers to help the young female FBI agent, Jane Banner (Elizabeth Olsen,) assigned to the case. She needs his help because she knows nothing about the area or how to investigate the disappearance due to flying in from Las Vegas. Cory has his own reasons for helping her find those responsible for her death. When given the opportunity he lets the father of the girl know that he will help the FBI agent so that he can avenge his daughter – and so he can avenge the death of his own daughter who had disappeared three years earlier.

This is a top contender for the best film I have seen this year. Jeremy Renner is heartbreakingly effective as the trained hunter that is trying to claw back from the death of his child. Elizabeth Olsen continues to prove that she has solid acting chops as the fish out of water FBI agent. Taylor Sheridan continues his brutal American trilogy with a film every part the equal of the prior two films. Wind River keeps the suspense level high and is very brutal at times. This is the type of hard-edged writing that could easily fit in with some of the best writing by Cormac McCarthy. At the heart of the film is a writer trying to shed light on a violence that occurs against the native women of this country but due to jurisdictional issues can not even be investigated.

To be honest, this movie completely blew me away. I give it my absolute highest recommendation.

Lionsgate did an extremely capable job on the brand new digital transfer of the film. With a ratio of 2.30:1 and MPEG-4 AVC encode, depth and clarity are excellent, with the shadows and grain of the film fully present. This film is one of the best looking films of this year, with truly beautiful snow covered scenery, and the transfer is fantastic. Like most films made currently, it is hard to find fault in what amounts to a perfect transfer from the digital source. This movie looks fantastic on Blu-Ray and benefits from some truly fantastic cinematography by Ben Richardson.

This is a very strong DTS-HD MA 5.1 track, managing to use all of the surround channels effectively. Similar to Taylor Sheridan’s other films, much of the film is dialogue driven until the violence explodes across the screen. When it goes crazy, the surround channels become active and the film uses directionality very effectively. I can’t think of a single problem with this track. Great stuff.

Wind River is one of the best pictures of the year. I continued to think about this film all day today after watching it last night. If you watch it, you will want to have a friend watch it also so you can discuss it. Taylor Sheridan is the most exciting new voice in American cinema and I can’t wait to see the next film he makes. The folks at Lionsgate have provided a fantastic transfer of the film with a well done audio presentation. The supplements are light, but I recommend purchasing this one immediately. Go out and buy this film.