Queen Bavmorda (Jean Marsh) has ruled her kingdom with an iron hand, but no one has the power to end her tyranny, except for one person. A prophecy has stated that a baby girl should be born and bear a special mark, which means she has the power to defeat Bavmorda. As she wants to ensure this never happens, Bavmorda holds all the kingdom’s expectant mothers and when she finds the chosen newborn, it will be killed before her own eyes. Soon enough, the child is found and Bavmorda is sent for, but the midwife manages to smuggle the young babe out of the castle, knowing it means her certain death. As Bavmorda’s forces hunt the woman down, she runs until she can’t keep up, then she sends the baby down the river, toward an unsure fate, but one better than facing Bavmorda’s wrath. The baby floats to shore right by the home of Willow Ufgood (Warwick Davis), an Elven farmer who has dreams of being a sorcerer. As soon as Willow takes in the child, he finds himself thrown into an adventure like no other, where he plays a central role in the future of the kingdom, which means a lot rests on his small shoulders. Can Willow manage to help fulfill the prophecy, even with some help from some powerful new friends?

This movie wasn’t a blockbuster at the box office, but it has won over a lot of fans and has become one of the most beloved fantasy films of all time. It’s hard to understand why it didn’t make a ton of greenbacks, as it has great performances from Warwick Davis & Val Kilmer, solid direction from Ron Howard, and was based on a story by executive producer George Lucas, but for some reason, it never made an impact in theaters. But thankfully, it has made up for lost time on home video and as such, remains a higher profile title. I am a fan of fantasy movies anyway, but even if you’re not, chances are that Willow will still manage to impress you. It has the traditional elements found in the genre, but is much brisker and more fun that most fantasy films, as well as having excellent production values. Yes, some of the special effects look dated now, but even so, Willow’s visuals still hold up well enough. A change in home video rights landed Willow with Fox and let’s be thankful for that, as Fox has given it the treatment it deserves. A gorgeous new transfer and a nice selection of extras have all been included here. As such, I give this release a very high recommendation, as it is worth every last cent, I assure you.

If anyone was ever born to take on a role, I think it would Warwick Davis, who seems so natural as Willow Ufgood. Of course, one main reason he seems so right is because of his size, which is the perfect match for an Elven, to be sure. But even outside of that issue, he just nails the part and really brings the character of Willow to life, very impressive work. His mannerisms mesh with the way Willow is written to behave, down to the smallest of touches, which makes the character seem realistic, always natural. Even his vocal work is dead on with the role, as he speaks with a certain brand of authority, though is often unheard by those around him. A nice blend of strength and vulnerability, Davis’ approach is just as it needs to be, without a doubt. Other films with Davis include The Phantom Menace, Leprechaun, Return of the Jedi, and Harry Potter & The Sorcerer’s Stone. The cast also includes Val Kilmer (Real Genius, The Saint), Joanne Whalley (Scandal, Mother’s Boys), and Jean Marsh (Return to Oz, Cleopatra).

When you’ve got a movie that has George Lucas personally overseeing the transfer, I think it’d be safe to assume that the film will look top notch, wouldn’t you?  As is the case with Willow, the movie has literally never looked better.  It looked pretty good a decade ago for its 15th Anniversary Edition on DVD, though the bar has been raised in the last ten years.  Simply put, this transfer is nearly flawless, save for a few things that are so small I won’t even bother to name them.  Detail is improved, colors look amazing, the film seems to have more depth, color and clarity than ever before.  The image seems to have more of a film-like appearance than I remember and thankfully they haven’t gone the DNR route with this catalog title.  While it’s true that some films out there are just pushed out for an anniversary, it’s clear that a lot of time, effort and most l likely money has gone into this, but it’s worth it as this image is nearly flawless.

Again, on a technical level, Willow delivers.  The previous “new” Dolby Digital 5.1 track found on the DVD is still present…on the DVD.  This Blu-ray features a brand new DTS HD Master Audio soundtrack that is nothing short of perfection.  Again, with Lucas at the helm you can bet that the movie will sound its best – and it does.  What really struck me is that nearly every scene seems to have at least something going on in some of the channels.  It sounds so immersive that there’s really a depth there that I really didn’t know existed.  Well it probably didn’t exist since this new soundtrack didn’t exist a few years ago.  As usual, James Horner’s score sounds excellent and resonates throughout the channels.  Those clamoring for a better-sounding version of Willow will be rewarded here.

Oh come on Fox…give us a break!  For as good as the movie look and sounds, the supplements are there but GONE is the commentary track from Warwick Davis.  And if it’s there, then I can’t find it.  Having said that, the supplements from the 2001 DVD are still there, starting out with “The Making of an Adventure” in which director Ron Howard gives us the lowdown on the movie, how it was his “first big cinematic adventure” and so forth.  “From Morf to Morphing” with Dennis Muren who works with ILM and gives us a rundown on the visual effects in the movie. Very informative.  The personal video diary by Warwick Davis is still intact that Davis shot on set (on VHS no less) and we get a gallery of matte paintings.  Some deleted scenes are also included with some intro. by Howard as well.  The second disc is the DVD of the film. 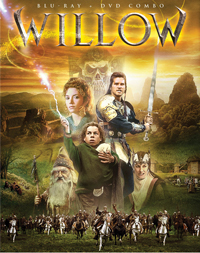