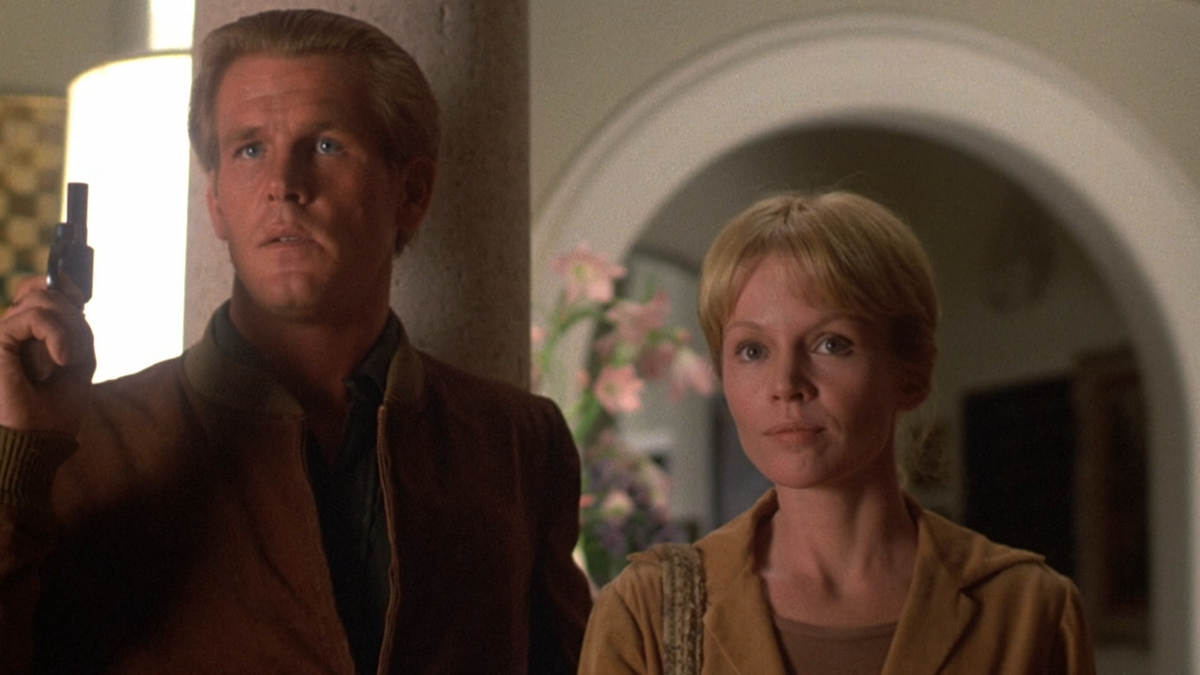 I love a good list. Most of my life revolves around little lists I make for myself to direct myself towards specific goals or direct my attention towards certain things I am curious about. Years ago, Time Magazine released a list of their favorite hundred English-language books after 1923. This is one of my favorite lists that I have stumbled upon and has given me lots of great recommendations for material to read. One such novel was the National Book Award winning novel by Robert Stone, Dog Soldiers. I read it recently – within the last year- and was absolutely blown away. It is a heartbreaking and enthralling novel. Grittier than almost anything and uniquely American. When I saw that Twilight Time was releasing the film version of the novel, I was excited.

Who’ll Stop The Rain tells the story of a disenfranchised reporter in Vietnam during the conflict named John Converse (Michael Moriarty.) John decides that he is going to transport a couple kilos of “skag” back to the states. The plan is to send the drugs back via his friend Ray Hicks (Nick Nolte) to his wife Marge (Tuesday Weld.) All Ray needs to do is drop off the drugs and collect an easy grand. There are numerous problems with his plan. First off, he is being set up by dirty bureau officers that plan to pick it off of him upon delivery. Secondly, his wife has become addicted to drugs while he was out of the country. When the plan blows up spectacularly in their faces, Ray leaves town with Marge and tries to avoid the crooked officers on his trail while John is held captive by them.

At the end of the day, this film left me torn. Even though the book and screenplay are by Robert Stone, the film leaves out some subtext that I found crucial to the success of the novel. One small fact that was left out for example was that the two men that are chasing down Ray are lovers and a bit more psychotic than you ever get the feeling in the film. Another issue that is left out of the movie is that John essentially decided to deliver these drugs to impress another woman in Vietnam. These are not huge details, but I found myself disappointed to see them needlessly left out. Those small details helped the novel to maintain a legendary status even now. The last thing that I was disappointed by – this one is more petty – was the name change of the film. Why change the name of the film to a Creedence Clearwater Revival song title when the original title fits so much better? I love the song, but it would be better to just use the song in the movie instead of needlessly drawing attention to it.

Now, on the other hand, the movie on its own terms is very well done. It has a great performance by the reliably fantastic actor Nick Nolte. Michael Moriarty and Tuesday Weld also turn in fine performances. The script by Robert Stone and Judith Rascoe has most of the key elements that made the novel great even if it is not quite as hard-nosed as the novel. One scene in particular, involving a teacher and his wife, is pretty much perfection. The direction by Karen Reisz is pretty good, albeit I did find some of the music choices towards the end to be a little bit overbearing (one scene in particular should stand out.)

Twilight Time provided a good looking transfer of the film with a 1.85:1 MPEG-4 AVC encoded image. The film has some graininess to it, but one can expect that to be the case given the time period. The film itself is not as visually compelling as some films shot at the same time, but the transfer is detailed and obviously benefits from the high definition upgrade. Overall, I was pleased with the look of the film, but it does not stand out in comparison to some other Twilight Time releases I have reviewed recently.

This film could have benefited from a stereo version due to the action scenes, but the mono track still holds up fairly well. Clarity of audio during dialogue was never an issue, although sometimes the actors speak fairly softly leading to a little bit of the soft-LOUD-soft pattern that can drive you crazy with a remote. Twilight Time have been faithful to their source with an MGM-based transfer.

Who’ll Stop The Rain is a good film based on an amazing novel. I think Nick Nolte was perfect casting as Ray Hicks and found the other performers capable. The transfer by Twilight Time is solid and the print seemed to be in good shape. I know that I will need to rewatch this one soon now that I have formed my initial opinion of the film versus the book. I could definitely see this as a case where it grows on me over time. One thing to keep in mind is that this novel and film were released much earlier than No Country For Old Men which has familiar thematic elements. Twilight Time have provided an interesting interview with the film’s editor as well. Fans will be happy with the release and I definitely recommend it – especially to those who have not read the novel yet. I am glad to have it in my collection despite a few qualms.