For better or worse, they just don’t make movies like Weird Science any more. The late John Hughes really knew how to write (and sometimes direct) for teenage characters. Released in the 1985, Science is very much a product of its time, but that’s also a good thing. It has all the ingredients of cheesy 80’s movies, the music, the clothes and of course, the really tacky wardrobes. It’s also a lot of fun. Perhaps not as popular as some of his John Hughes other films such as “The breakfast club” or “Sixteen Candles”, Science was still popular enough to warrant a short-lived TV series. The films stars Anthony Michael Hall as Gary and Ilan Mitchell-Smith as Wyatt. The two friends are constantly bullied at school and at home by Wyatt’s older brother Chet (The hilarious Bill Paxton). The boys see Frankenstein on TV and it’s here that they decide to build their very own woman. Kelly Lebrock plays the woman who they eventually name as Lisa. Computers and technology in general have come a long way since 1985 and this certainly add a nostalgic factor to the film. It was also long before the internet as well. The film wastes no time in getting to the setup. Within the first 15 minutes or so, the boys have already created the “perfect woman”. It’s rather amusing seeing them put everything into the computer when they’re designing her.

This is certainly a much sillier film than most of John Hughes other films. The very premise is obviously far-fetched, but that’s OK. Outside of the creation of Lisa, the film does stay more grounded in reality. One thing Hughes was good at was finding balance in his films. The characters are well written and the film has its heart in the right place. Anthony Michael Hall was a regular in several of Hughes films and does fine work here. There’s an amusing early scene in a downtown nightclub and Hall plays it wonderfully. Ilan Mitchell-Smith does god work here too, but his whiny voice did start to annoy me after a while. Bill Paxton as Chet is wonderfully over-the-top. I don’t think anyone has ever had a sibling quite like him, but it’s played for laughs and it works here. It’s hard to take him seriously with such a ridiculous haircut. I don’t know how to describe it, but it requires much confidence to walk around with a haircut like that. Robert Downy Jr. (Robert Downy at that time) also shows up as an arrogant jerk who isn’t nearly as cool as he thinks he is. The plot is very predictable at times, but sometimes is not where a film is headed, but how it gets there. The ride is part of the fun. The middle of the film revolves around a party sequence with a biker gang showing up to disrupt the party. The film does have a nice message at its core about accepting yourself as you are. Watching the film today almost 30 years after its release was a real treat. I am surprised by how well some of the effects hold up. Sure, some stuff looks dated, such as the ancient looking, bulky computer monitors and the wardrobes, but it also adds to the fun of the film. I won’t call this the best John Hughes film ever, but it’s still a great time and one that his fans will want to add to their collection.

This is probably the best Weird Science has ever looked and probably the best it will ever look. That’s still not saying much, however. As it stands, the transfer is acceptable, but nothing to write home about. I noticed a bit of grain throughout and there was a washed out look to much of it. The VC-1 encoded image leaves a lot to be desired. The details is decent throughout, but I think Universal should have touched up the transfer more. I no longer have the old DVD to compare it to, but the Blu-ray should really look better than this.

The new DTS track is a little better than the transfer. It’s not the best track, but it serves its purpose. The rear channels get plenty of good use. There’s a lot of music in the film and several instances of strong background noise. Vocals are clear and strong and there’s a smooth balance to the whole thing. I think fans will be pleased with the track here.

For one reason of another, John Hughes never participated with special features and interviews for his films. I remember reading that he became very reclusive in his later years. This set repeats the same extras found on the 2008 DVD Re-release. It comes packaged in a slipcover that provides 1980’s factoids.

Stepping Out of the Machinery

While not as memorable as some of the other John Hughes films, weird science still remains an entertaining and fun film. Picking up the disc should be a no-brained for fans. The disc serves the film nicely, and we don’t see many films like this these days. 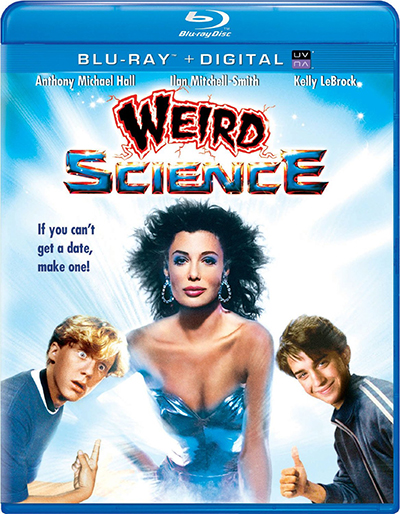