Movies of the 80’s seemed to focus on one thing: geeks. Those folks in high school who are now running the world. What’s that saying about karma? On a broader scale, the films of John Hughes exploded during the Reagan-era mainly because Hughes had a way of relating to teens and what they were going through. Weird Science completed a veritable “hat trick” for Hughes with Sixteen Candles, The Breakfast Club preceding it. The next year would see perhaps his most-loved film with Ferris Bueller’s Day Off. Everyone’s got their favorite Hughes film and I think that as the years have passed, this one might be mine.

Gary (Anthony Michael Hall) and Wyatt (Ilan Mintchell-Smith) have had no luck breaking out of their geeky roles in school. They’re tormented by Ian (Robert Downey Jr.) and Max (Robert Rusler) for admiring their girlfriends: Deb (Suzanne Snyder) and Hilly (Judie Aronson). At Wyatt’s house, whose parents have left for the weekend, they use Wyatt’s computer skills to design a program that simulates a woman so they might ask it questions. Through a series of unfortunate events, they manage to hack into a government computer system for more power and, viola, they’ve created a real woman who they name “Lisa” (Kelly LeBrock). Lisa possesses magical powers, is at the boys’ beck and call, and puts them on the fast track to becoming popular. Chaos and hilarity ensue.

Admittedly, Weird Science was a bit of a departure for Hughes and his films as it added a bit of fantasy to his usual angst. It worked. Anthony Michael Hall was already a household name with starring roles in National Lampoon’s Vacation, Sixteen Candles and The Breakfast Club, so his inclusion was a no-brainer. Add to that a great role for the late, great Bill Paxton as Wyatt’s brother and seeing Robert Downey Jr. in his mid 80’s form is something to behold (he was equally as good in Back to School playing essentially the same character as he did here). Movies like this don’t come around that often and John Hughes was able to capture lightning in a bottle with so many of his films. If, for some reason, this one has eluded you run, don’t walk, to check it out.

Though it’s been a while since I’ve sat down to watch this film, I’ve seen it enough to know that this is the best it’s ever looked. Arrow did a new restoration for this Blu-ray release and it shows. However, on the more “realistic” side, I have to say that even as good as it looks, it’s still not quite as stunning as I’d have hoped. The palette used is a bit pale and muted, though some scenes do show a marked improvement. Granted, the film is nearly four decades old, but I’ve seen older films look better. This is, by no means, “bad” by and stretch, I simply think that we’ve become so spoiled by how good some films look, we overlook those that don’t seem their best. Detail has been improved, colors do show a bit of improvement (compare it with the included edited for TV version) and, again, this is the best the movie has ever looked. I’ve seen it on nearly every format imaginable.

The included DTS HD Master Audio track has a few moments of greatness, but this isn’t one that you’ll use to demo the extremes of your sound system. Vocals seem on the up and up and some ambient surround effects persist, but I’d classify this more as a good stereo mix as opposed to anything that’ll “put you in the center of the action.” As I was scrolling through the home screen perusing the extras, Oingo Boingo’s “Weird Science” song plays in a continuous loop. I got sick of it after a few minutes. On the whole, it’s a modest mix that should satisfy, though there are certainly better-sounding films out there.

I’ve come to the realization that some of my favorite movies came from the 80’s. And I’m OK with that. The films of John Hughes spoke to teens then as I expect they do now. Yes, some are bit dated, but a movie like Weird Science is chock full of nostalgia. I have to give Arrow credit for a good restoration and adding several new features to one of my favorite films from the 80’s. This supersedes all previous versions out there. Pick it up. 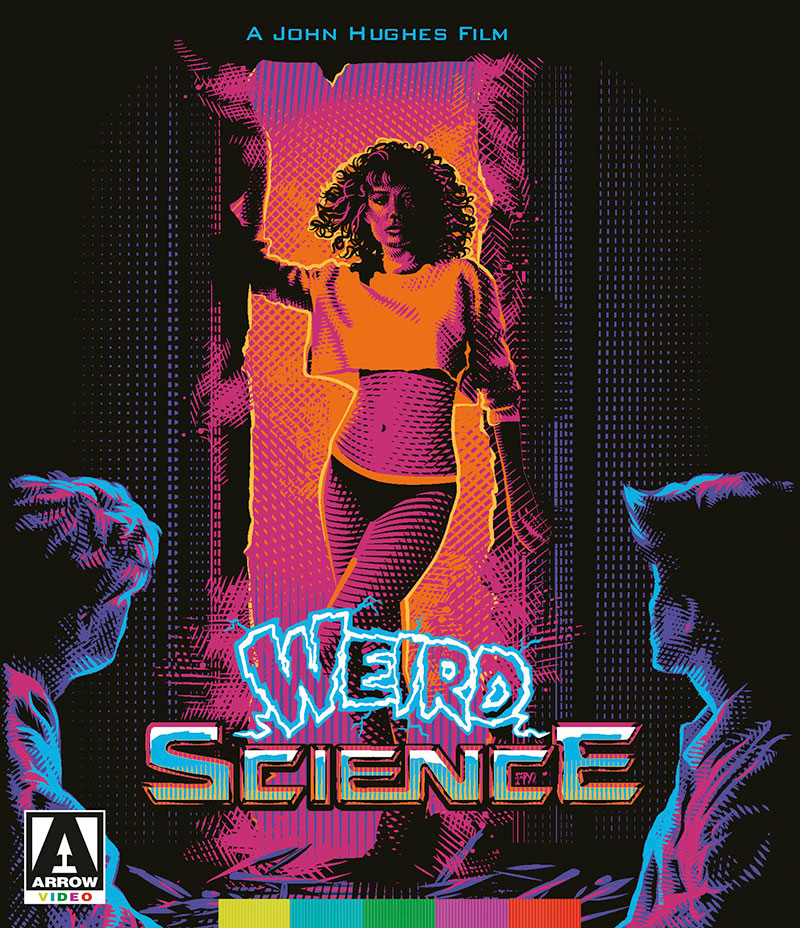