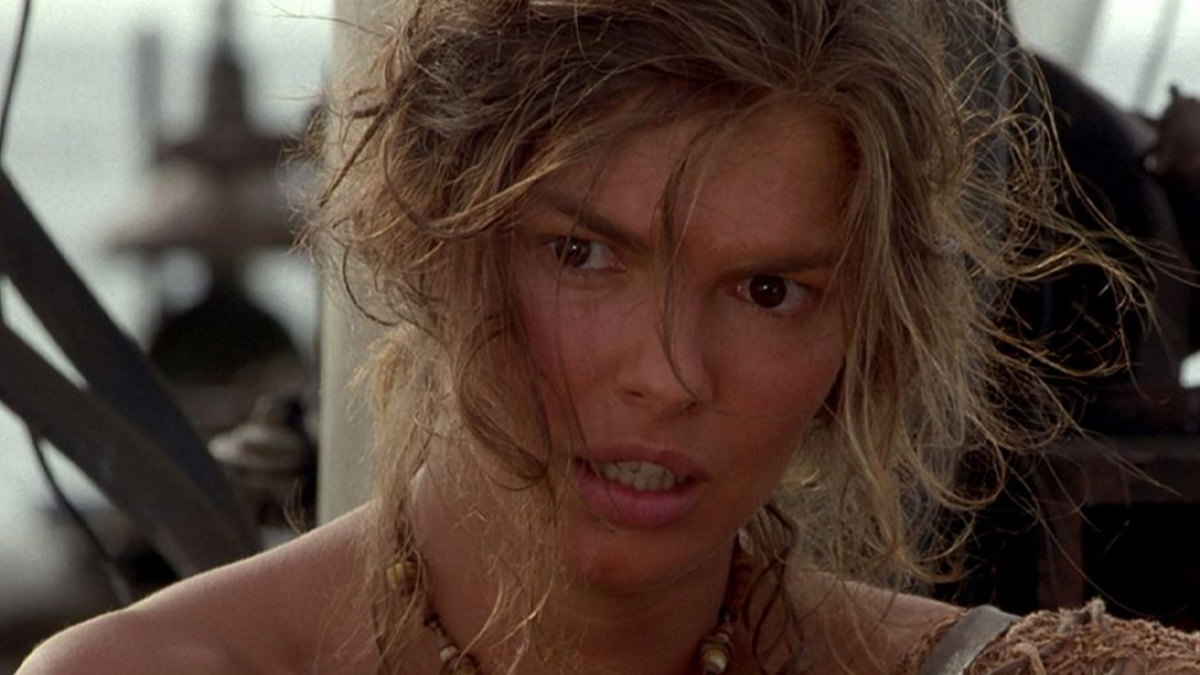 I have said it before, and I will say it again: I am a devoted fan of Waterworld. The film has its fair share of detractors, but over the years has amassed a small cult following. I was curious when around April Fool’s Day of 2018, Arrow Video posted to Facebook drawings of Christian Slater from Heathers, a monster from Crimson Peak, and (most importantly) a drawing of Dennis Hopper’s Deacon character from Waterworld. My journalistic side took over and I immediately wrote Arrow Video to see if they planned to release a new version of the film with a 4K scan. At the time they were forced to tell me that there were no plans currently that they could announce. My heart sank and I found myself often thinking of the possibility of a 4K Waterworld. How sweet that would be…

I was overjoyed when I saw the announcement that Arrow was not just releasing the film sourced from a new 4K transfer, but would be releasing a three disk version of the film with all three versions of the film including the Ulysses cut that runs just under three hours long. I preordered it immediately. It was one of those moments where you simply say “Take my money, please.”

I know that many people look down on this movie as one of the biggest box office disasters and the film was critically maligned when it was released. They are about half right. The film actually managed to receive on average about a two star review with some people loving it and some people (like my parents) hating it. I remember that even as a kid I was a little bit let down by the unfulfilled promise of the film, but still enraptured by all of the imagery in the movie. The movie may not have been a box office success state side, but it did actually achieve decent numbers over seas. It eventually regained all the money that it initially lost. The Waterworld stunt show still happens at Universal Studios as of the writing of this piece. People at the time took to calling it “Fishtar” and “Kevin’s Gate” and relegated the film to the dustbin of flops and critical disasters. This reputation did not stop me from buying it for about five bucks on Blu-ray in a bargain bin a few years ago. Upon revisiting the film, I was pleasantly surprised a how well it had aged.

When I was a ten year old boy living in Arkansas, my favorite channel was the Sci-Fi channel. I would watch reruns of The Twilight Zone and tune in for anime on Saturday mornings and anything else that could hold my ADD at bay. One of the great things about the Sci-Fi channel was that they ran extended segments on any upcoming science fiction films. Even though I wasn’t allowed to see most of the films due to their ratings, I would gaze on in wonder at the worlds they were creating thanks to conceptual sketches and breakdowns of the numerous special effects being created for the films. Features on 12 Monkeys, Event Horizon, Dark City, and Waterworld immediately come to mind. I was extremely excited that at least one of these movies was only PG-13. Through perseverance, I was able to rope my parents into spending their hard earned money on a film where the lead character has gills. They were not as into the film as I was.

The plot of the movie is a bit of a mess. The polar ice caps have completely melted and the world as we know it is almost completely underwater. People live in tribes that have formed small floating communities on top of the water. Resources are incredibly scarce, especially soil (called “dirt” by everyone in the film.) When we first meet Kevin Costner’s character he is peeing into a contraption which purifies his urine which he promptly drinks. Costner plays the anti-hero of the film, an unnamed character they just call the Mariner that likes to go it alone on his decked out sail boat. The Mariner arrives in a small community with his wares and some dirt to trade. After receiving numerous resources for his dirt, he meets a woman named Helen (Jeanne Tripplehorn.) Helen cares for a child that has prophecies of where to find dry land. The child has a map tattooed on her back. When the small town realizes that the Mariner is a mutant that has gills, he is strung up while they decide his fate. Helen helps the Mariner to escape along with the child in order to keep the child safe from the paranoid townspeople. There is an evil leader of rough pirates named Deacon (played to perfection by Dennis Hopper.) Deacon presides over numerous jet-ski riding “smokers” and he wants the girl so he can find the dry land for his own gain. Through circumstance the Mariner must help Helen and the child to avoid Deacon and make their way to dry land.

I watched Waterworld a few years ago, and I found myself actually really enjoying it. As I noted in that review, parts of Waterworld are flat out terrible, mainly anything to do with Costner having gills. Just as importantly, parts of Waterworld are jaw dropping. The set design and production design throughout the film are incredibly good. I would say that it is some of the best and most imaginative production design of any film. The film was made for $175 million dollars, and it really looks like the money made it on-screen (aside from the dated special effects in the last thirty minutes of the film.) The stunts in the film are some of the best put to celluloid, sometimes besting scenes from the similarly costumed and themed Mad Max Trilogy. The acting was actually, given the circumstances, great. I am not secretive about the fact that I like Kevin Costner, and Dennis Hopper is fantastic as the villainous Deacon. At the end of the day, Waterworld is a stupid concept executed brilliantly. I found myself really enjoying most of the film and occasionally laughing out loud at the worst portions of it. The film is full of excess and some people will feel like it is just too much of a course to devour all of it.

This film was one of the last truly great action films that relied more on practical effects and production design than on computer generated effects. It is interesting that the most dated portion of the film is the grand finale that utilizes some truly unexceptional computer generated special effects. The film in many ways marked the end of an era and the beginning of another. When the film struggled commercially it made it harder for such inventive films to get the green light. To this day, no movie looks or feels like Waterworld. Depending on who you are, that is either a good or a bad thing.

My opinion of Waterworld has only grown in the years since revisiting it a couple years ago. Rewatching it again with the new Arrow transfer is a real treat. So, let’s talk about the new cuts of the film.

The Television Cut – this version of the film is on the second disk and features more than forty minutes of additional footage. This was a well-loved version of the film that aired frequently on television when I was growing up. This version also censors out roughly a minute worth of footage, so it is the cut I am least likely to watch because of the Ulysses cut.

The Ulysses Cut – this version of the film which runs just under three hours long features all of the footage from the TV cut along with all of the censored footage from the original cut. I sat down and watched this version and I couldn’t help but smile from ear to ear. It was like experiencing the film anew again. The added time does have a few moments that are puzzling and should have been cut from even this version, but fans of the film will enjoy getting to spend extra time in this world. I also found that the plot was a little more rounded out.

Fans of the film will want to check out the Ulysses cut as soon as possible. It is a great option that rivals the theatrical version we all know and love.

Waterworld is a cult film. It will be obvious pretty quickly if it is going to appeal to you. For myself, I could not be happier to have this new version in my collection.

Arrow provided the following information within the beautiful 60 page booklet that comes with the set:

Waterworld was exclusively restored by Arrow Films and is presented in its original aspect ratio of 1.85:1 with stereo and 5.1 sound.

The original 35mm camera negative was scanned in 4K resolution on a Lasergraphics Director scanner at EFilm, Burbank. Additional 35mm intermediary elements were scanned in 4K resolution for those sections unique to the Extended TV Cut and Ulysses Cut versions. An extensive search was undertaken by NBC Universal to locate all the additional sequences, optical sections and titles necessary to complete these longer versions of the film. Some of the effects sequences in these longer versions were never completed for the theatrical release so they remain in unfinished form.

The film was graded and restored at Pinewood Studios Group, London. Picture grading was completed on a DaVinci Resolve and restoration was completed using PF Clean software. Final grading review and approval was supervised by Director of Photography Dean Semler at EFilm, Burbank. The stereo and 5.1 mixes were remastered by NBC Universal.

All original materials supplied for this restoration were made available by NBC Universal.

The cinematography by Dean Semler holds up beautifully. The original Blu-Ray was a tremendous leap forward from the DVD. This new transfer by Arrow makes that version obsolete. The film is a visual marvel and rivals anything as far as I am concerned visually. It looks gorgeous. Fans should be thrilled to have this definitive version of the film.

From the start of the film to the finale, Waterworld shines in the audio department. The DTS-HD MA 5.1 track still sounds fantastic. Action scenes are robust and surrounds are used to great effect throughout the entire film. I enjoyed this mix more than I had imagined. Sound editing throughout the film (especially considering the breakneck pace of most of the action scenes) is incredible. For a film over twenty years old, the sound mix is on par with the best offerings that we see today. I don’t think there is any difference between this track and the previous Blu-ray, but the previous track needed no improvement. There is also a 2.0 track, but I can not for the life of me think of a logical reason to listen to that track versus the incredible surround track.

Waterworld will always be a polarizing film. Some people can’t see the hard work and breath taking art that was created for such a calamitous film. I am not one of those people. Waterworld may be laughable in numerous areas and have some pacing issues, but it still continues to fascinate twenty four years after its initial release. I personally can’t help but love the film despite its shortcomings, Arrow have provided a beautiful new transfer and one of the best array of special features ever assembled including three cuts of the film. You must watch the special feature documentary Maelstrom. It is astoundingly good. For fans of the film – and they are out there – this is the definitive collector’s edition. Highly recommended.