Twilight Time has proven itself in the past few years to be one of the absolute best distributors of Western films. They have put out great films like The Man from Laramie, Hombre, and The Bravados amongst many others. I have come to completely trust their judgement on what Westerns are worth my time so I sat down on Father’s Day and watched their recent release Warlock. Starring Henry Fonda and Richard Widmark, the film was directed by Edward Dmytryk and shot by cinematographer Joe Macdonald. I will say that the movie was one of the highlights of my day.

In the small town of Warlock, Sheriff Thompson is called out into the street by some cowboys under the employ of Abe McQuown (Tom Drake.) The sheriff is sent out of town on a horse with no saddle. The cowboys get rowdy and they kill a barber. The town holds a meeting and decides to hire a gunslinger. They hire a Marshall named Clay Blaisedell from the nearby town of Fort James with a good reputation for cleaning out undesired elements with his golden colt revolvers. Blaisedell (Henry Fonda) brings along his faro dealer and trusted companion Tom Morgan (Anthony Quinn.) Tom is lightly crippled but an excellent shot. Blaisewell’s fee is $400 a month, significantly higher than what a Deputy would make. Johnny Gannon rides along with his brother Billy (Richard Widmark and Frank Goshin) under the employ of McQuown. When McQuown’s men get in a confrontation with Blaisewell, Johnny realizes that his cohorts are “back shooters” and he can’t be associated with them. Johnny decides to stay in town instead of riding with McQuown’s gang. His brother Billy stays with the gang. Outside of town, while an attempted robbery occurs by McQuown’s gang of a stagecoach, Tom shoots and kills a passenger. The passenger was Ben Nicholson who had come to try to kill Blaisedell for his brother Bob’s widow, Lily Dollar (Dorothy Malone.) She wants to see Blaisedell dead. When the mob tries to kill the men who are arrested for the crime, it is broken up by Blaisedell. The next day Johnny Gannon accepts the job of deputy when nobody else in the town will. Johnny meets Lily and they hit it off. Meanwhile Blaisedell and a town woman named Jessie become involved. Johnny wants to execute the law as it is written which puts him at odds with Blaisewell’s form of justice and the McQuown gang. Tom Morgan wants Johnny to fail so that the people will continue to rely on Blaisewell.

Warlock is an excellently made film. While the film is a Western, it is an “adult” western. The film’s themes are meant to appeal to an intelligent audience and the film is based on a novel by Oakley Hall which was nominated for the Pulitzer Prize. The actions that the characters take in the film are well drawn. The film was adapted by Robert Alan Aurthor.

The film was directed with skill by Edward Dmytryk. Dmytryk commands some strong performances from his actors. All of the key actors and supporting cast are great. The film has three powerhouses on display – Henry Fonda, Richard Widmark, and Anthony Quinn. Fans of classic films will definitely enjoy the wide array of great supporting actors as well. The movie was shot in CinemaScope by cinematographer Joe Macdonald and it looks fantastic. CinemaScope lends itself to wide vistas and Warlock provides plenty to enjoy gazing upon.

Twentieth Century Fox supplied Twilight Time with a beautiful MPEG-4 AVC encoded transfer of the film in 2.35:1 aspect ratio. This transfer comes from a new 4K scan. The film was shot in CinemaScope and it looks amazing in high definition. CinemaScope has aged so well. This film is a CinemaScope spectacle with color by Deluxe. I love these Western films and when presented in 2.35:1 the widescreen fills my television. Fine detail is exceptional. Colors are striking. It’s essentially flawless.

Twilight Time has provided a surprisingly robust DTS-HD MA 5.1 surround track. Obviously, some purists will hesitate to enjoy the film in anything but Mono, but I personally enjoyed how much the surround track elevated the music in the film and helped to accentuate the few shootouts in the film. Fans should be very pleased to see that Twilight Time have also provided a DTS-HD MA Mono track for purists.

Warlock is a great film. The film is beautifully shot, well acted, and well written. Henry Fonda, Richard Widmark, and Anthony Quinn all light up the screen with their performances. Fans of Western films or good writing in general will enjoy this release. The transfer is flawless and the surround track is wonderful. Highly recommended. 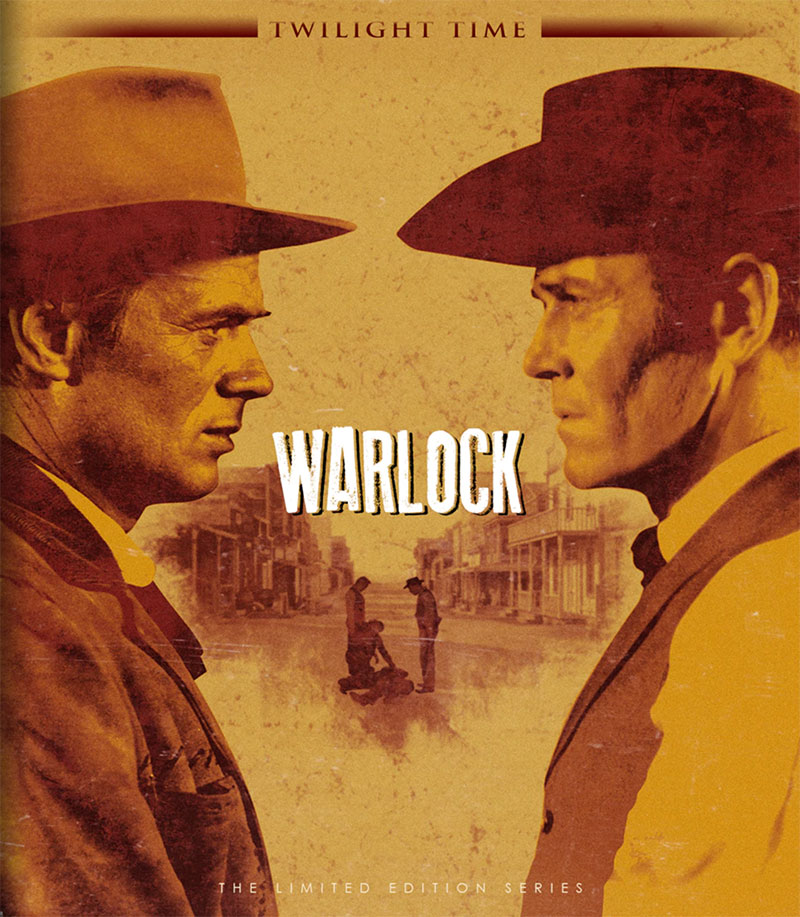