Outside of hearing some friends talk about it, I had no clue what Warcraft is or anything else about it. To be honest, I never cared to find out, either. I’ve long grown out of video game, and I prefer the simpler ones where I can simply turn my brain off and have fun. Mario jumping over a mushroom is about all I need to be entertained. Needless to say, I may not be the ideal candidate for the film version of Warcraft. With that being said, I do think when these films are made that they shouldn’t just appeal to the fans of the game. I still remember how much I enjoyed the original Resident Evil when it came out back in 2002. Now, I admit to being familiar with those games, but it had been years since I played prior to seeing that first film, and it had that mass appeal. The same can’t be said for the countless sequels, but you get the idea. I bring this up, because as I sat and watched Warcraft, I felt like a stranger in a foreign land. They might as well have been speaking in another language, because very little of the film’s plot made sense to me. It sounded like gibberish. Obviously, this can be quite taxing to a reviewer when you have to discuss the plot to some capacity. I’ll try my best, but make no mistake, this film was intended for hardcore fans of the game.

The home world of the orcs is known as Draenor, and there are forces out there that hope to destroy it. They’re not going to just sit there and let their world be taken over. Instead, they choose to fight. The orcs are led by Gul’dan (Daniel WU), and they open a portal to a human world that they plan to colonize. It’s here that a battle begins between the humans and the orcs. I’ve only touched on the plot, but there are more characters than I cared to keep up with, much less cared about. That’s really the film’s biggest undoing is that it’s just so hard to become invested in the story to any extent. I will say that visually speaking, the film is quite a treat. It just looks nice. I was reminded a bit of the Lord of the Rings trilogy, but the big difference is I had an interest in how those stories played out. I won’t tell you I could keep up with every character or plot point in those films, but they were far more involving than what we get here. Visuals can only take you so far. There must be a story to help drive the action forward. Unfortunately, Warcraft isn’t that film. Most of the CGI is very well done, but there were moments where things were less convincing. Some of the animals in some scenes felt a bit out of place and off looking. Still, I suppose if you enjoy the source material then you’ll enjoy this film. I can’t attest to how loyal it is since I’m unfamiliar with the game, but is seems that way.

Fans of The Lord of the Rings or The Hobbit will feel right at home here. As one might imagine, most of the work in this film is done by CGI (yeah, I know – it’s hard to believe that Orc’s really don’t exist) and it gives a very unique look to the film. Some scenes look more like cut scenes from a video game, which makes sense considering the origin of the movie. But viewing this in 4K is a joy in every sense of the word. There’s so much going on in some of the battle scenes, it nearly takes a second viewing to get it all and let it sink in. I use this term lightly, but “flesh tones” seem acceptable though I’m not sure how realistic an Orc’s skin is really supposed to look. That said, the 2.40:1 HD image is pretty much everything we’d expect it to be and probably a bit more. This might be a good one to fire up and showcase your Ultra HD system.

I’m willing to bet that if ever there was a movie that was destined for amazing sound, this has got to be near the top of the list. The included Dolby Atmos mix is among the most amazing I’ve heard and rivals that of the best ‘battle’ and ‘war’ films I’ve ever heard. Simply put, every channel is put to good, effective use. The clanging of swords, things blowing up and the growl of, well, creatures all sound amazing. Atmospheric sounds really resonate through the room, the LFE are heavily involved and I really was hard-pressed to find any fault with the way this sounds. If you’re looking for a movie to demo your set up, look no further.

In terms of visuals alone, Warcraft gets a pass. Unfortunately, in terms of characters and plot, it fails miserably. For a casual viewer, there’s just nothing here of interest, or that makes a lick of sense. There are worse films of this sort, but also much better ones. Unless you’re a fan of the source material, skip it. 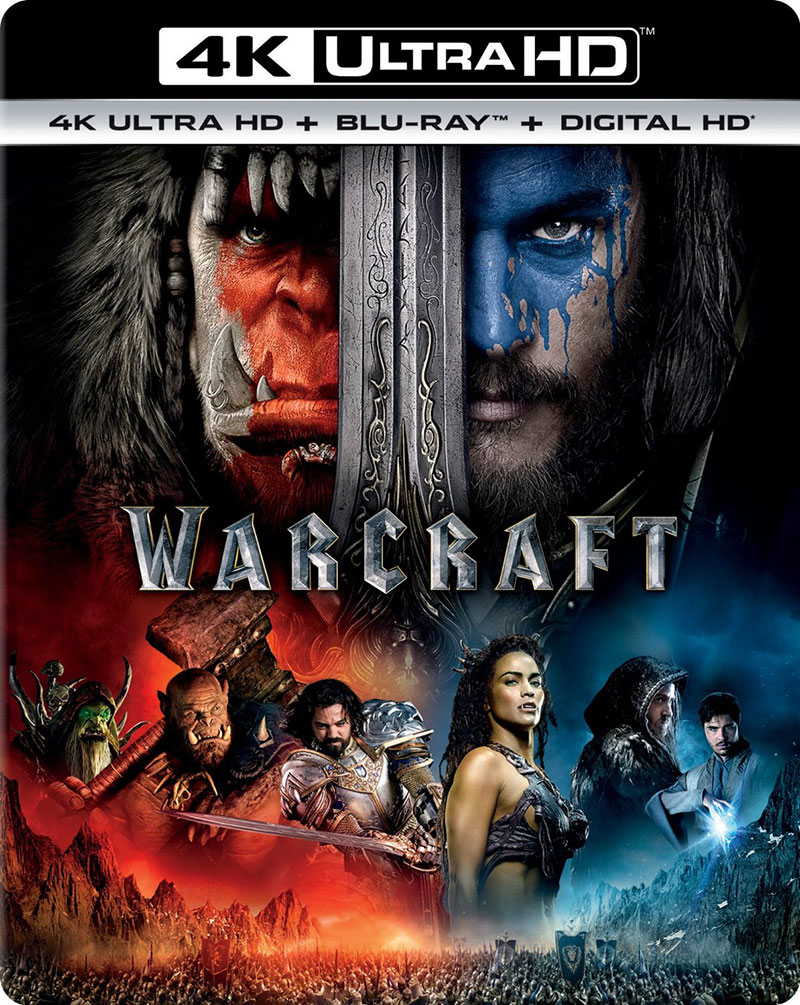