Offering something of a change of pace for Director Todd Philips, War Dogs tells a fact-based tale about gun smugglers set in 2005. Miles Teller and Jonah Hill headline the film, and their performances are a large part of the film’s success. There might be some viewers who were a bit disappointed by the film’s somewhat misleading marketing campaign. They played up the comedic angle while the film is much darker and more dramatic than one might expect. While I certainly enjoyed it overall, I have to wonder what a more established director might’ve done with this material. The film has echoes of 2005’s sadly underrated Lord of War starring Nicolas Cage. For those who haven’t seen that film, I highly recommend it. Dogs is much more of a mixed bag as the second half drags the pacing down a bit too much. It certainly loses some of its edge as well. With that being said, the pros slightly outweigh the cons to make the film worth checking out once.

Frustrated with his current job as a massage therapist, David Packouz (Teller) reconnects with childhood friend Efraim Diveroli (Hill) at a funeral. Efraim works for a company called AEY which sells arms to the government. He offers David a job. While skeptical at first, David eventually accepts the offer. David has a girlfriend Iz (Ana de Armas) who recently got pregnant. Clearly, he needs this job to help secure his financial future. The film is narrated by David, and there are a lot of ins and outs of the job that we learn. Things are complicated, but the film does a nice job of keeping us involved even while the details are more complex. A large part of what works here are the performances. Hill is at the top of his game as Efraim. Teller does a good job as well even though Hill has the flashier role. Unfortunately the Armas character is something of the weak link here. It’s not her fault so much as the role itself. It’s the typical female character who’s there largely to worry about David and even threatens to run away with their child. It’s all too familiar by now. Bradley Cooper shows up in a supporting role, and does OK work here. I think the biggest issues the film faces are the fact that this type of story usually involves the rise and the fall of the characters. Certain elements can seem a bit cliché, but it’s not a fatal flaw. There are some pacing issues, but Philips does an admirable job of keeping things moving along nicely for the most part.

There are many great things about seeing a movie in 4K/Ultra HD, but maybe seeing a “pleasantly plump” Jonah Hill isn’t among them. Seriously, though, the movie is new to the format and takes advantage of all it has to offer. The sun-baked Miami beaches and the desolate desert of the Middle East look about as different as night and day. Detail is as we’d expect, sharp as hell and looking at this version and its Blu-ray counterpart, the HDR does have a few advantages as we’d expect. I really couldn’t find much to complain about and I wasn’t expecting to. Flesh tones are warm and natural, though a bit “cooked” in some scenes, but contrast and shadows were strong and I noticed no signs of articling. While I’m sure that most everyone would be satisfied with the Blu-ray, this 4K version resonates in a good way.

This is an awesome soundtrack! Seriously, there are some movies that are held together with their array of songs contained within and this is one of them. It’s been years since I heard the Beastie Boys’ “So Wha’cha Want?” and it was then that I knew I’d dig this track. And I did. Big time. The included Dolby Atmos mix doesn’t miss a beat and we get the standard issue (get it?) track, but it’s got a few areas to shine. In a movie dealing with guns and ammunition, we’re treated to a few choice scenes that showcase the atmospheric mix and with great effect. Vocals are pure, rich and free of distortion and ambient sound effects are used to great effect.  Back to the soundtrack, though, this is really an excellent mix. Ranging anywhere from Iggy Pop to Neil Diamond (yes, Neil Diamond) to Dean Martin to House of Pain. Awesome!

While not without issues, War Dogs still entertains with an intriguing story and strong performances from the two leads. It’s also great to see an original film in a time film with countless remakes and superhero films. The influences are easy to spot, but the film is worthy of a rental so long as expectations are in line. 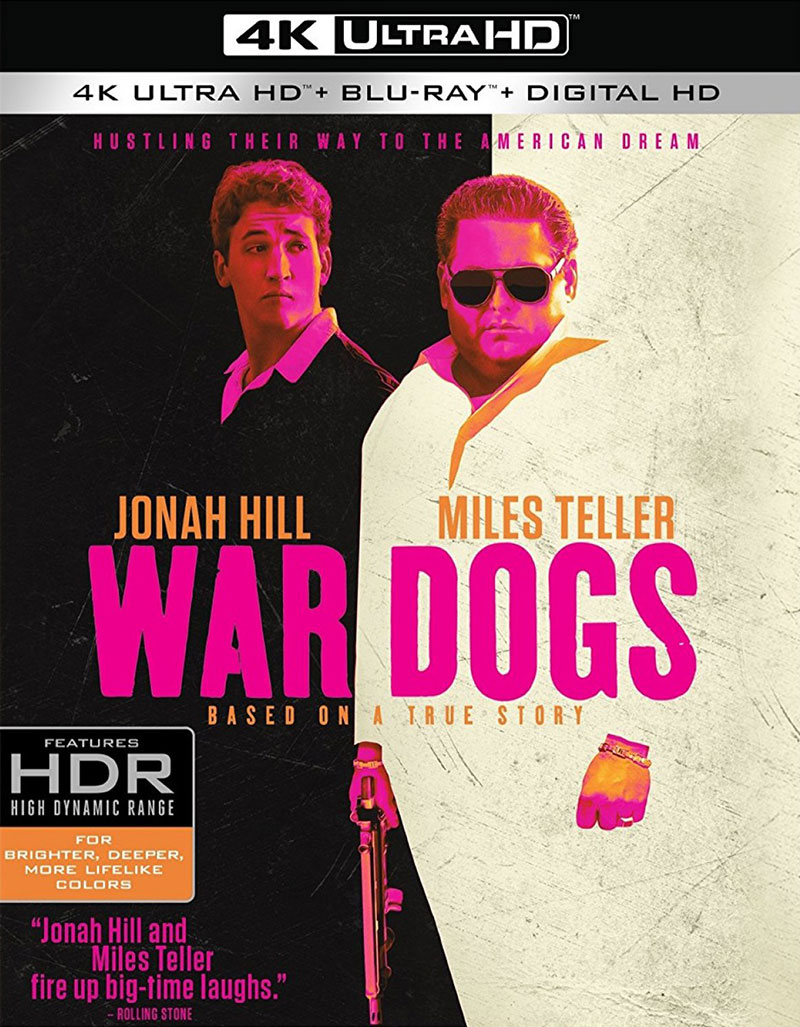