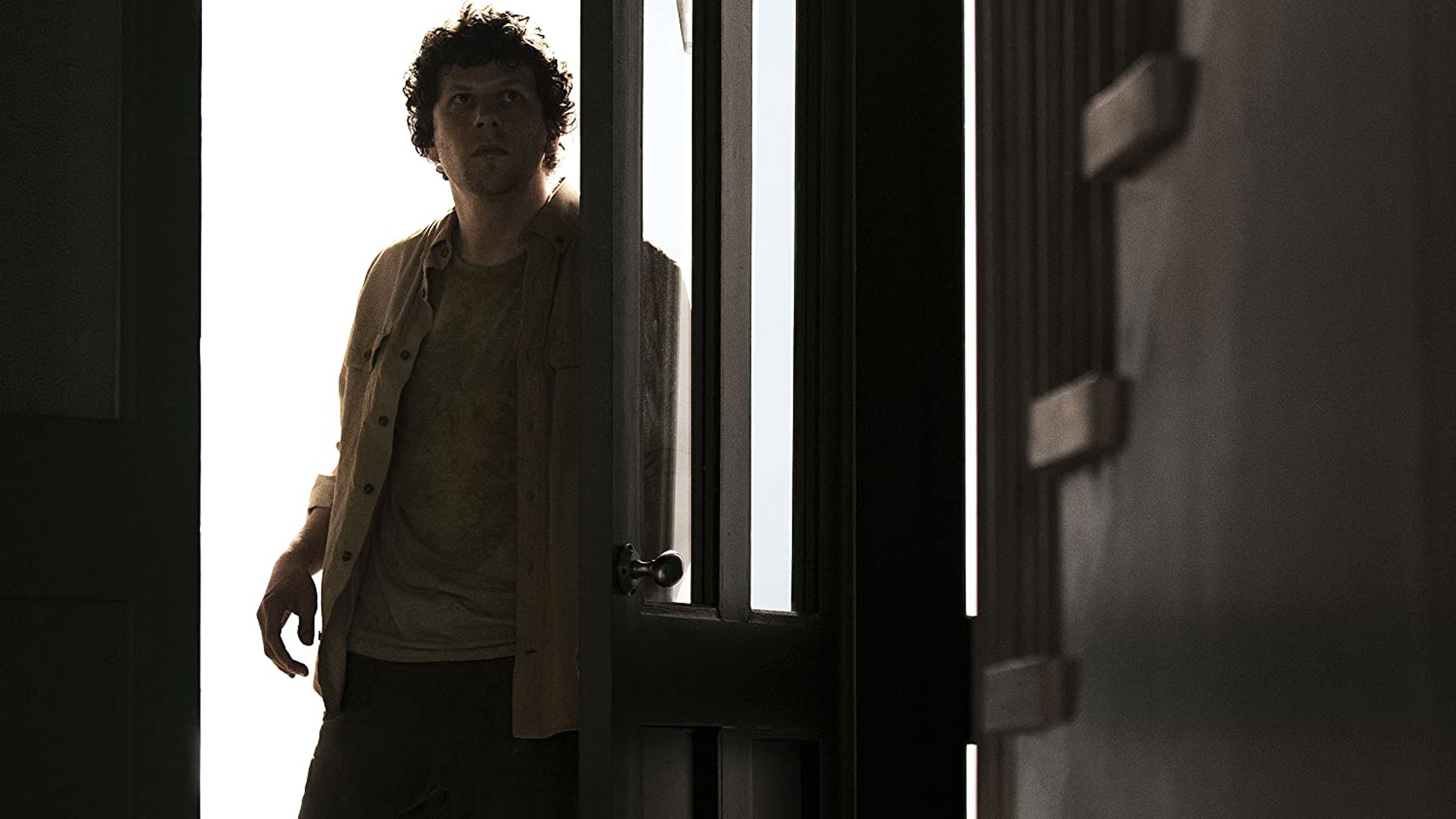 I have to believe that there might be a punishment in the afterlife that involves doing the same thing every day with no hope for escape. There is, actually. The story of Sisyphus told that he was punished for his deceitfulness by being forced to roll an immense boulder up a hill only for it to roll down every time it neared the top, repeating this action for eternity. And, in a way, that’s what I got out of Vivarium. The film stars Imogen Poots and Jesse Eisenberg who are reteaming from The Art of Self-Defense (itself a strange film). Fans of Black Mirror will find this one right up their alley and it might be a good idea to learn what the literal definition of Vivarium is prior to watching the movie. I’ve done that for you: An enclosure, container, or structure adapted or prepared for keeping animals under semi-natural conditions for observation or study or as pets; an aquarium or terrarium.

Gemma (Imogen Poots) and Tom (Jesse Eisenberg) are a young couple that are looking to buy a house and start a life. They meet with a realtor, Martin (Jonathan Aris) and are subsequently led to a neighborhood called “Yonder.” All the houses look identical, the yards, furnishings and so forth. It’s as if someone cut and copied and entiere neighborhood for as far as the eye can see. Halfway through their house tour Martin disappears. The duo try to leave but find that they constantly end up right back where they started. Days (or weeks or months, time doesn’t seem to have meaning in Yonder) pass and they’re presented with a baby. The attached note says to raise it and they’ll be released. The boy grows at an exponential rate. As Gemma tries to nurture the child, Tom descends into madness, passing the time by digging a hole in the front yard. Are Tom and Gemma ever to escape or is this one house tour they wish they’d never have taken?

It’s taken me a few days to shake this one off. I honestly can’t imagine anyone enduring anything like this. I’d probably last a few days and then decide to kill myself. Then again perseverance has never been my strong suit. New director Lorcan Finnegan has crafted something pretty interesting here. It’s like watching a train wreck in that you can’t turn away. Couple that with Eisenberg and Poots who obviously work well together and they’re the ones that carry the film. Then again they’re on screen for 99% of the film, so they don’t really have any other options. There was room for improvement in Vivarium, for sure, and if you like your films that end on a high note and with all the questions answered well then this isn’t for you. But if you want to be entertained, eerily so, then this one is.

If you’ve ever wondered if you could make a copy of the house from The Brady Bunch, complete with astroturf backyard, and stretch it for as far as the eye could see, that’s a good idea of what you’ll be treated to. Actually the house in The Brady Bunch is a lot nicer than those in Vivarium. The endless blocks of identical houses create an eerie sense and it fits well with the film. The sterile environment doesn’t leave a lot of room for diversity, but the two main stars seem to stick out like a sore thumb. The 2.39:1 AVC HD encode looks good, with stark contrasting scenes and even the darker bits look good. Detail is excellent and even the cotton candy like clouds in the perfect sky have an odd sense about them.

The included DTS HD Master Audio mix doesn’t have a lot of room to flex its muscle outside of the obnoxious boy screaming. And if you’re reading this before having viewed the film, now you know what to expect. Vocals (except for the boy) are warm and natural. Eisenberg doesn’t employ his standard rapid-fire talking like he does in other films, he’s a bit more subdued this time around. Surrounds are used, albeit sparingly. This is a fairly standard, by-the-book track that delivers, but nothing exceptional.

This is a weird movie, to be sure. It’s also one that sticks with you long after the credits roll. If you’re a fan of The Twilight Zone or Black Mirror, you’ll be right at home (pardon the pun). Lionsgate’s Blu-ray looks good and the extras are a bit sterile, so this one is for the fans only.