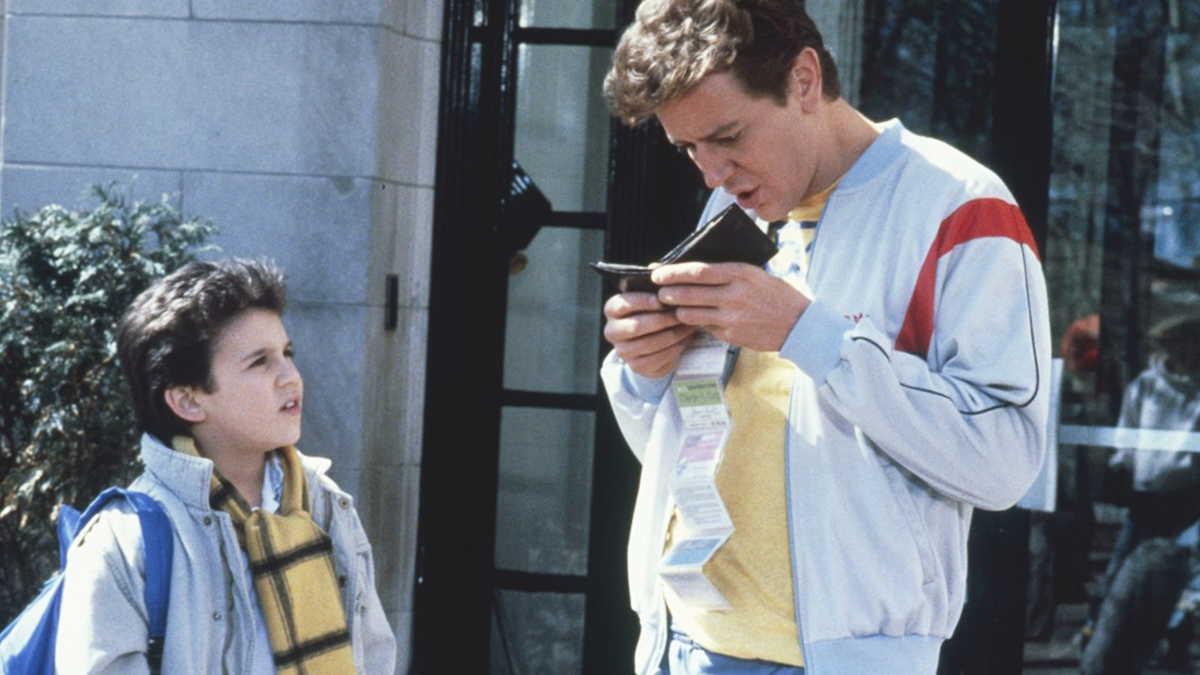 They sure don’t make em like they used to. While there used to be many role reversal films of this sort in the late 80’s, they’re a rarity these days.Vice Versa offers a predictable yet lighthearted and perfectly entertaining and wholesome film with a simplicity and charm that’s largely missing from a lot of films today. Best known for his role as Kevin Arnold on the TV show The Wonder Years, Fred Savage turns in an effective performance here as young boy who then switches places with his father played by Judge Reinhold. Both actors are given something of a dual performance here as they’re also playing each other’s respective part once the change takes place. It might sound a bit complicated on paper, but seeing it played out over the film is all part of the fun.

Fred Savage plays Charlie. He’s an 11 year old and seems to enjoy his social life very much. He plays the drums with his fellow bandmates at school, but his father isn’t always there for him. Judge Reinhold plays his father named Marhsall Seymour. He’s vice president of a Chicago department store and also seems to be wound a little tight. Charlie’s parents are divorced, and for the upcoming week, he must stay with his father. The first 10 minutes or so are a bit hectic as we see a lot of other characters and the purchasing of a skull that’s to be smuggled in the country. Marhsall obtains the skull and as Charlie is holding the skull during an argument in their apartment one night, a curse is released. Charlie wishes he could have his dad’s life and vice versa. See what I did there? And there you have it. Now the two of them have switched bodies. It’s amusing to see a young Fred Savage acting as his father, but obviously in his own body. Reinhold also has fun in his role which is essentially now his 11 year old son. As Charlie goes to school, it’s his father in his own body so there’s a lot of fun with him being unsure of which classroom to go to and what to do. The same can be said of Marhsall as he doesn’t know which was his office is when he gets to work. This all might sound a bit confusing, but it makes much more sense when watching the film. I mentioned the first few minutes being a bit hectic, but that’s just to set the wheels in motion for the fun that ensues.

The plot here is nothing original, and indeed these were a dime a dozen back in the late 80’s, but the film remains enjoyable throughout. There’s just something refreshing seeing the film now when the simplicity has been lost with a lot of modern films. The film not only has plenty of laughs, but also has its heart in the right place. It only helps that both actors are entirely committed to both of their parts as they are essentially both dual roles. It’s been some time since I last saw this film, but I’m thankful to say that it holds up after all these years.

We get an AVC encoded 1.85:1 transfer that looks surprisingly good after all these years. The Chicago background is given nice detail in several scenes and interior shots are strong as well. The print looks nice as well, save for a ripple here and there. Still, the film has never looked this good and has been cleaned up nicely. It might not be the flashiest film, but it works well here.

We get an uncompressed 2.0 track that works about as well as you’d expect it to. Vocals are fine and this is a more talky film, though there are some action bits here and there. It never seems restricted in any way and creates an enjoyable experience that’ll please fans.

We sure don’t see films like this anymore. Savage and Reinhold definitely give it their all as well, and that adds to the experience. The film comes recommended. While it would have been nice to get some extras, it’s good to at least have the film on Blu-ray.