Taking the plot from Westworld, Vice stars Bruce Willis (in a limited role) as Julian. He creates the vice program where your fantasies can be brought to life. As often the case with new technology, there is a flaw in the system. An “Artificial” turns rogue and a cop (Thomas Jane in a ridiculous wig) is on the case. He’s the typical movie cop who seems like he spends the majority of his off time in a bar. The film throws us plenty of action scenes rather quickly. I didn’t count, but there’s at least a half dozen chases with various gunshots and explosions in between scenes of overly complicated exposition and bad dialogue. The problem I had was caring a bit in the slightest. I can forgive many things, but the acting here is so wrong on so many levels. Bruce Willis looks bored as only Bruce Willis can. Thomas Jane seems miscast as the cop who should probably take a good nap and then a good shower.  Ambyr Childers is also very bland as the female lead. Maybe that’s the point since she is in fact an “artificial”, but she didn’t get me any further involved with this dud.

Even as I was watching the film, my mind would often wander. One of the big questions that came to mind was what would compel the cast to star in this garbage? Surely there were better, more interesting scripts they came across? Willis seems to be giving Nicolas Cage a run for his money in terms of accepting virtually any role that he’s offered. While the film is a big dud and should be avoided like the plague, there is some potential here. I like the idea of a modern Westworld. It’s been some time since I last saw that film, but with the advancements in CGI and special effects, the results could be great, at least in theory. The effects seen here are at least passable considering the films small budget. Director Brian A Miller does a good job of keeping the film moving with a nice pace. It’s just t

Even though the movie is about as “B” as they come, Vice still manages to look pleasing to the eye. The 2.40:1 AVC HD transfer is certainly indicative of what we’d expect a new to Blu-ray film to look like, though it falls a bit short of perfection. Colors are bright and vibrant, though I found a couple instances of some grain and a tad bit of movement in some of the shadows. Nothing to get too upset about, but it’s there. Flesh tones look warm and acceptable, it seems that we’ll never see Bruce Willis with hair again. It’s a good visual effort, but considering the age of the film, I was expecting a tad bit more.

Moving onto the audio, the DTS HD Master Audio mix is actually rather robust and, to be frank, not at all what I was expecting. It’s a dynamic mix that cycles through the channels and creates a very immersive feel. It’s a shame that such a nice effort was wasted on this film, but you can’t have it all. Vocals are pure and crisp, Willis’s quiet, yet deep voice resonates through the center channel with the greatest of ease. Surrounds are surprisingly active and help complete what’s actually a very nice and pleasing mix.

Not a lot to choose from here and I doubt this film has too many fans, but I’m sure they’re out there.

Don’t expect to find some hidden gem with Vice. The story is dull, acting even duller and generally uninteresting. It seems everyone on board is just trying to cash a quick paycheck. Skip it.oo bad the story and the acting couldn’t keep up. 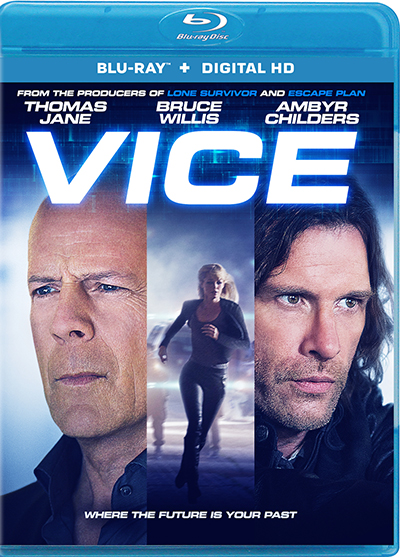