Brian Slade (Jonathan Rhys Meyers) was on top of the glam rock world, but faked his own death in an outlandish on stage incident. Ten years ago, Slade ended a musical performance with a faux assassination, faking his death and vanishing from the spotlight. After a decade, a reporter named Arthur (Christian Bale) is assigned to pen an article about the shooting, which leads him deep into the life of Slade. He also has a personal interest in Slade, as Arthur found himself attracted to the musician and struggled with those feelings. So he begins to track Slade’s career from the start, speaking with anyone who has information about the unusual performer, learning intimate details about the man’s life. He also discovers parts of his own life that mirror Slade’s, which causes him to reexamine his own choices. Will the reporter be able to uncover the truth behind the staged shooting and in the process, will he be able to  unlock his own true path in life?

Who doesn’t love a movie about glam rock, right? Velvet Goldmine is said to be based on real life events, but as I am no expert on David Bowie’s life, I can’t say much about that. You’d be hard pressed not to think about Bowie as you watch the film however, so perhaps there is truth in those claims. In any case, the movie brings the glam rock world to life in vivid fashion, complete with a potent soundtrack. Velvet Goldmine has style to burn, with vibrant, colorful visuals, wild costumes, and a genuine 70s texture that really helps bolster the atmosphere. You can tell an immense attention to detail was put into practice, as the era is well captured and seems quite authentic. Not just the production design elements either, but the actual movie itself seems to be a relic of the 70s, thanks to some artistic touches. This all adds up to a realistic, believable environment that makes the people and places seem authentic, which is a huge boost to the production.

Velvet Goldmine is presented in 1.85:1 widescreen. This transfer is excellent, as it remains faithful to the intended visual design, but still delivers a remarkable technical presentation. As I said above, there is some 70s haze to the visuals, so detail doesn’t always leap off the screen, but this shows a lot more depth than the DVD version. The vivid colors shine here in bright fashion, while black levels are stark and deep, simply beautiful. A film with a stylish visual direction like this one really benefits from a strong transfer, so kudos to the technical staff on this treatment.

As the film is based in the world of music, as you’d expect the soundtrack is quite lively. The musical soundtrack puts the surrounds to good use, with dynamic presence that brings the music to life. I didn’t pick up on much surround use outside of the music, but that was never a hindrance. The music sounds terrific and that is what matters in this case. The dialogue is clear and clean as well, so no problems there. This disc also includes English and Spanish subtitles.

This disc includes audio comments from director Todd Haynes and producer Christine Vachon, as well as the film’s theatrical trailer. The commentary session is informative at times, but tends to be a little overly heavy on the praise. When it deals with production details however, it is quite interesting. Unless you’re a devoted fan of the movie however, you can safely skip the comments, as they’re all too inconsistent. 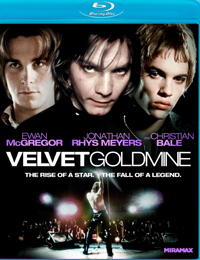