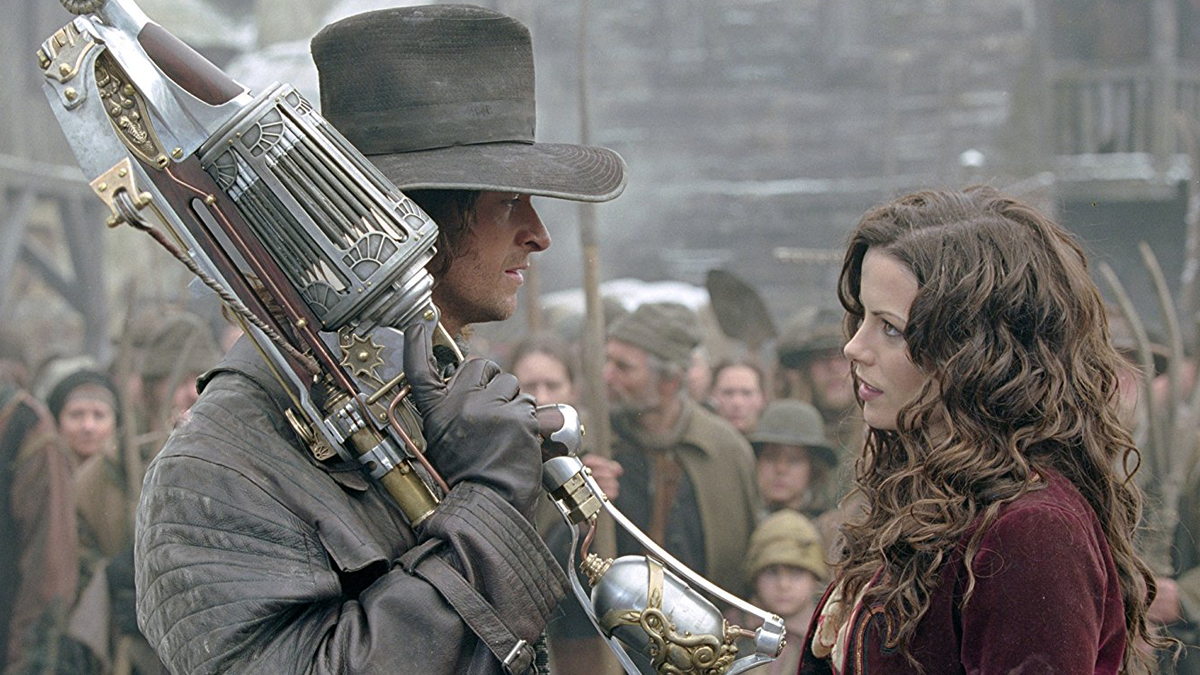 At its core, Van Helsing is everything that’s wrong with American pop-culture filmmaking in its most distilled, purest form. The “film”, such as it is, is little more than a framework (or an excuse) for a 132-minute onslaught of computer graphics wizardry. There is virtually no character development and, while the climax does give us a ham-handed attempt at emotion, this is still, at its essence, a film without a soul. The irony couldn’t be thicker, I grant you. Hugh Jackman does what he can with the material (and he’s actually quite good given what he’s handed to work with). As the title character whose job it is to hunt down and kill Count Dracula, Jackman’s very presence exudes a kind of masculine coolness that can only happen organically with the right casting. Kate Beckensale plays the obligatory love interest (although just when either of them became “interested” seemed to elude me the first go around), and she, too, is very good. She may survive things that would kill a normal person countless times throughout the movie only to play a key role in a “realistic” twist toward the film’s climax, but that’s beside the point. One doesn’t watch a film like this to care about realism (or even to pretend to understand it), and so it is with our eyes eagerly awaiting the goodies and our brains on temporary leave that we dive headfirst into the breathtaking, numbing experience that is Van Helsing.

I will never again condescend to presume that any film is merely a series of loosely connected plot threads inter-cut with action set pieces lest I first compare it to the visual barrage of this picture. There is so much going on at any one point in Van Helsing that you can literally miss an entire subplot with an ill-timed restroom break. Of course, such subplots are relatively needless, as no real background is needed to enjoy the real meat and potatoes of the film on their own, relentlessly episodic terms. I felt while watching this that it played more as a series of ILM experiments than a film. As such, it can be decadently entertaining. There’s simply no need here to get too involved. The images simply wash over you in a seemingly unending effort to maintain your unflinching attention to the screen. This is the kind of film that has no memorable lines and no memorable characters, but has countless undeniably memorable moments. If this doesn’t end up being the demo disc of choice for the next year or so, I’ll be astonished beyond words. It’s not that the film is that good; it simply plays so much like a demo on its own that it’s just destined to be viewed in clips.

Now don’t get me wrong. I’m not saying there’s no value to be found here. There’s simply no real substance, either. But then, if we all longed for substance over spectacle, the 1997 Academy Awards would have played out very differently. As it is, Van Helsing is the kind of film that everyone loves to hate and hates to love in today’s climate of aggressive non-participants. Sure, we complain that movies just aren’t made with the kind of heart that they used to be, but we just can’t help but trade in those few dollars to unwind with a flick that doesn’t even tempt us to think. Sure, this movie reeks of the kind of style over substance and quantity over quality method of filmmaking that we all profess to abhor, but we’re still drawn irrevocably to its promise of thrills without consequence, chills without fear, and action without impact. Part of the job of the American filmmaker today seems to be finding that new way to keep us all selling two hour segments of our lives away to a vicarious, artificially-created roller coaster ride set to celluloid. Of course, on the flip side, we’re still careful not to go out of the house without adequate sun protection or to waste those two minutes of extra life on a cigarette. My grandfather always said, “no one ever gets rich selling people what they need – it’s what they want that sells”. A movie like Van Helsing makes me truly understand what he meant for the first time in my life. Not because I didn’t enjoy it – but because I did.

Van Helsing comes to Blu-ray in a 1.85:1 HEVC HD transfer and call me crazy, but doesn’t this movie seem to scream for a wider aspect ratio? Nevertheless, this new transfer looks as good as I’ve ever seen the film look and except for the opening scene, colors are bold and strong. The opening black and white is a good, not great, example of contrast though it’s rather limited in time. As one might imagine, the majority of the movie is done with CGI and as one of the members of the review staff mentioned “It’ll either look amazing or dated…” and I’m inclined to agree.  It’s a dark movie and thankfully there’s no artifacting to distract us from the detailed storyline going on!

A new DTS X mix has been added for the Ultra HD version and I did notice a few times when it really took off.  The soundtrack really takes it up a notch or two. Surrounds are almost constantly humming away and the battle scenes seem to really have a depth that I didn’t notice before. Dialogue, as we might expect, is very strong and well-centered. Jackman seems to mumble a bit in this role, but that still doesn’t detract from a solid soundtrack. LFE are used at times, though when they’re active you’ll most certainly know it. This will give your system a workout, no doubt about it.

You’ve seen and/or heard everything before. Nothing new has been included.

Though it didn’t light up the box office, I’ve always enjoyed Van Helsing. Hugh Jackman has a way of portraying things with such a deadpan sense of style – it’s hard not to enjoy. It’s nice to see this in 4K, but the supplements are once again the same and though the uptick in video and audio is noticeable, it’s up to you if it’s that much better to add to your collection – again.