The Valley of Gwangi (Blu-ray) 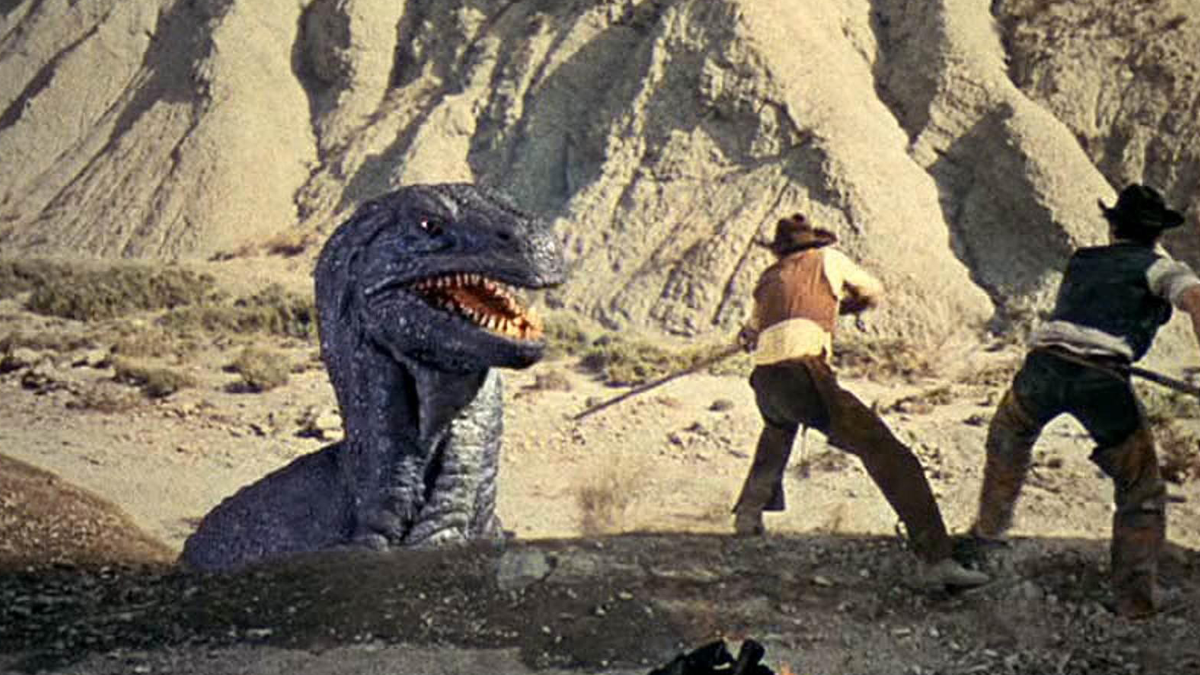 T.J. (Gila Golan) is the star of a traveling Wild West show, where she rides her trusty steed off a high dive into a flame surrounded water tank on the ground. She is a delight to watch, but attendance has been down of late. When her old flame Tuck (James Franciscus) shows up and offers to purchase her horse for Buffalo Bill’s show, she agrees, which seems odd to Tuck. But she only agreed because she knows she has an even better attraction on tap, one that will turn the show’s fortunes around. This incredible attraction is El Diablo, a horse smaller than anyone has seen before. Tuck knows this breed has been extinct for centuries, so he consults a paleontologist. This leads to a pact with gypsies to return the tiny horse to a forbidden valley, as the gypsies believe it is cursed and so the paleontologist can see what other secrets the valley holds. But when El Diablo is gone, the show’s crew suspects Tuck, even though he wasn’t involved. Soon T.J., Tuck, and a whole crew from the show descend on the valley, most with their own agendas, but what will they discover in this mysterious valley?

This one is just so much fun. As always, Ray Harryhausen crafts some incredible beasts that even now, create some true movie magic. You can tell the special effects of Ray Harryhausen were the main focus of the production, as the rest of the movie seems less explored and funded. So if you just want a western or romance, you might be let down, as the effects are the stars of The Valley of Gwangi. The Gwangi itself is impressive and gets a good deal of screen time, including some nice rampage action. The scene where the cowboys attempt to rope the Gwangi is so cool, reading about the production revealed that the scene took over a month to complete. You also see the title beast clash with an elephant and Triceratops, as well as the various people he grabs and eats. The effects work on the elephant and Triceratops are also great and the tiny horse is a sight to behold. I know some will dismiss The Valley of Gwangi because the effects might seem dated, but as I said before, they still look better than a lot of the CGI out there. And these effects have soul, as Harryhausen poured care and emotion into his creations. I think anyone who appreciates monster movies or practical effects will have a lot of fun here.

The Valley of Gwangi is presented in 1.85:1 widescreen. You can retire your DVD, as this new transfer is a remarkable improvement. The image shows much more detail in most scenes, the exception being the special effects shots, in which the live action footage suffers. But that is a production issue and I doubt anything can be done to reverse that loss of resolution. The creatures look excellent and that’s what matters in this one. The colors are natural and warm, while contrast is stark and never obscures detail in the least. Fans should be quite pleased here.

A DTS HD lossless mono soundtrack is here and while unremarkable, it does the job well. I didn’t pick up much in terms of age related issues, so hiss isn’t a concern or pops or the like. Just a clean, solid track that makes sure the movie’s audio is on point. I hate the screams of the elephant though!

A fun, old school movie experience that gives us cowboys, dinosaurs, and the magic of Ray Harryhausen. Yes it is dated, but honestly the special effects are more believable than most of the modern CGI tripe. The movie is still a lot of fun and for fans of monster movies, unique westerns, or Harryhausen, The Valley of Gwangi is well recommended.