If you were to take a poll of all of my immediate family members, I’m guessing that National Lampoon’s Vacation would be near (if not the top) the top of the list. Why? It’s simple, actually…every family out there considers themselves to be the Griswold’s – and mine is no exception. Most all of us have had to bear the ordeal of meeting family we don’t like, take trips that sound fun on paper, but later turn out to be disasters and a little too much “family time” can be just enough to push anyone over the edge. This is no better illustrated than in this movie. Director Harold Ramis has delivered a timeless movie, like most of his that just seems to make “sense” to everyone. With Caddyshack, my all-time favorite movie, he showed us that snobs and slobs could get along. Movies like Stripes, though filled with dated 80’s humor, were funny and with his masterpiece of Groundhog Day; he showed us that even the same day can be repeated. Though his more recent efforts haven’t been nearly as entertaining as his earlier ones, this stands out as being in his pantheon of great movies. Oh, and the great Club Paradise, who could forget that!

Vacation is the story of the Griswold’s. Clark (Chevy Chase), Rusty (Anthony Michael Hall…this time), Audrey (Dana Barron…this time) and Ellen (Beverly D’Angelo). Clark is a ” … genius with food additives … ” and wants nothing more for his family than to show them a great time on their family vacation. But unlike so many other family vacations, the Griswold’s aren’t going to take a plane out to sunny California; no they’re driving cross-country. Why, you ask? Why to go to Wally World, of course! Wally World is, of course, the movie’s equivalent to Disneyland (Disneyworld) and by the movie’s end we think that Clark is the only one who really wants to go; not his family. Having an almost obsessive upbeat and positive attitude, he gets his family to be excited about the whole deal and it’s off they go. Naturally, Murphy’s Law is in full effect here and anything that can go wrong does. They get their hubcaps stolen in East St. Louis, they run in with Ellen’s cousins (led by the funniest man alive, Randy Quaid) and get stuck taking their Aunt Edna (Imogene Coca) to Phoenix (only for her to die along the way) and once they get to Wally World, well, let’s just say that it doesn’t live up to all their dreams.

Part of what makes the movie so much fun is that we can all relate to it. We’ve all been on the “trip from hell” and all remember it, but Clark is trying to show his family a good time, though he just doesn’t know when to throw in the towel and quit. The supporting cast is just as funny, Brian Doyle Murray makes a cameo appearance, Randy Quaid is perhaps the most memorable character as his loveable Cousin Eddie and John Candy has a great role in the end as a security guard. Suffice it to say that the players here make the trip worth remembering as well as the story. Now if you’ll notice that I added …this time to the names of Rusty and Audrey (played by Anthony Michael Hall and Dana Barron). Here’s why. Of the four Vacation movies, every one had a different actor to play the kids. First Rusty got older, then younger. It’s almost insane as we can’t tell which way they were going. Of course the parents, Clark and Ellen, remained the same as played by Chase and D’Angelo; but it’s something that we let go. If you’ve never seen the movie, then you’re in for a treat. The humor isn’t that dated and even today in the age of computers and cell phones, families must take vacations. This is everything that goes wrong with one.

Since this is the second time the film has been released on Blu-ray, this transfer appears to be the same one. I no longer have the older version to compare, but it looks about the same to me. That’s not a bad thing since it was already pretty good to begin with. The colors are nice and accurate, the details are strong as well. There were traces of grain on occasion, but overall, it serves the film nicely. It’s a noticeable improvement over the old DVD editions from years ago. This was released last year for the film’s 30thanniversary so a new transfer would’ve been most welcome, but I don’t think that’s a huge flaw. The image is VC encoded with a 1.85:1 ratio. I think fans will be pleased.

We get a DTS Mono mix here, but it still serves the film OK. There’s really not much to say here since it is indeed a mono track, but I feel pleased with it. I did have to turn the volume up a bit more than I normally do, but for a film that’s over 30 years old now, it sounds quite good. I’m guessing fans won’t be too disappointed. It’s only coming from the center, but it gets the job done.

Ok, so basically, if you already own the first Blu-ray edition from 2010, there’s really no reason to upgrade. You’re essentially getting the same A/V specs with only a new documentary. Given that the documentary is about the same length as the feature film, there’s a lot of ground covered in it. I just don’t think it’s worth an upgrade for that, though. If you don’t already own it, then picking up this version is a no-brainer.

National Lampoon’s Vacation is a classic and most likely always will be. Of the two existing Blu-ray’s, this is the one to get with the comprehensive documentary included. The audio and video are exactly the same as the previous bare bones release. If you haven’t seen the movie, well then treat yourself to one of the better films of the past three decades. This one belongs on every shelf. 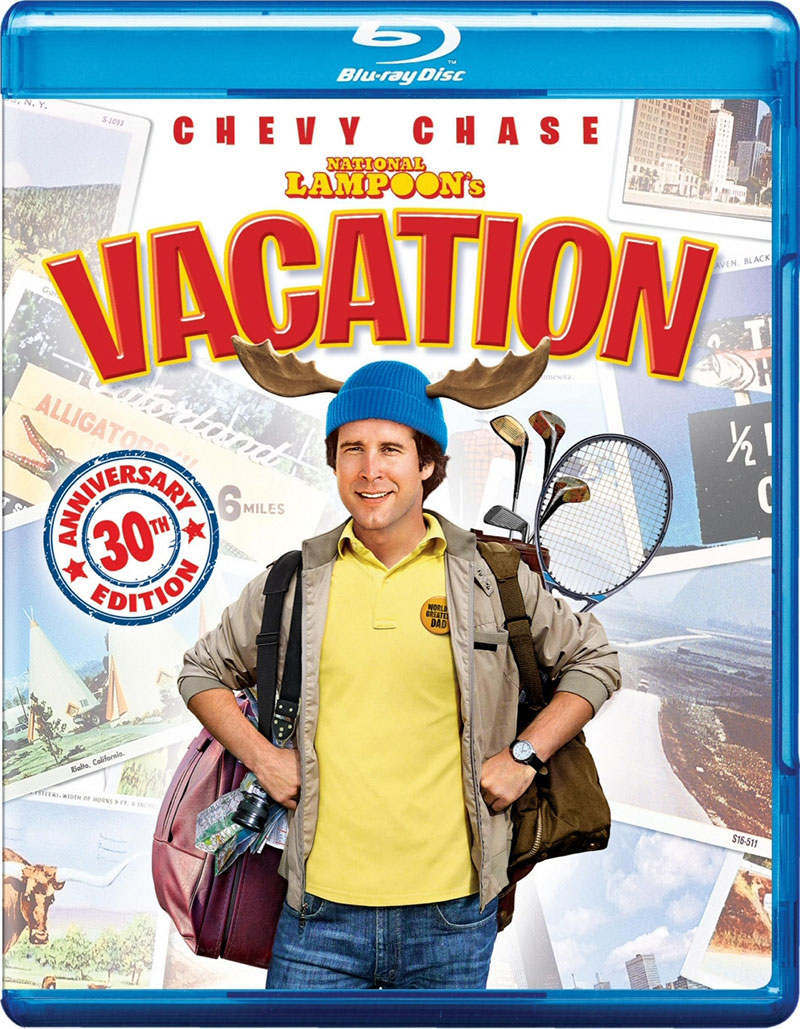