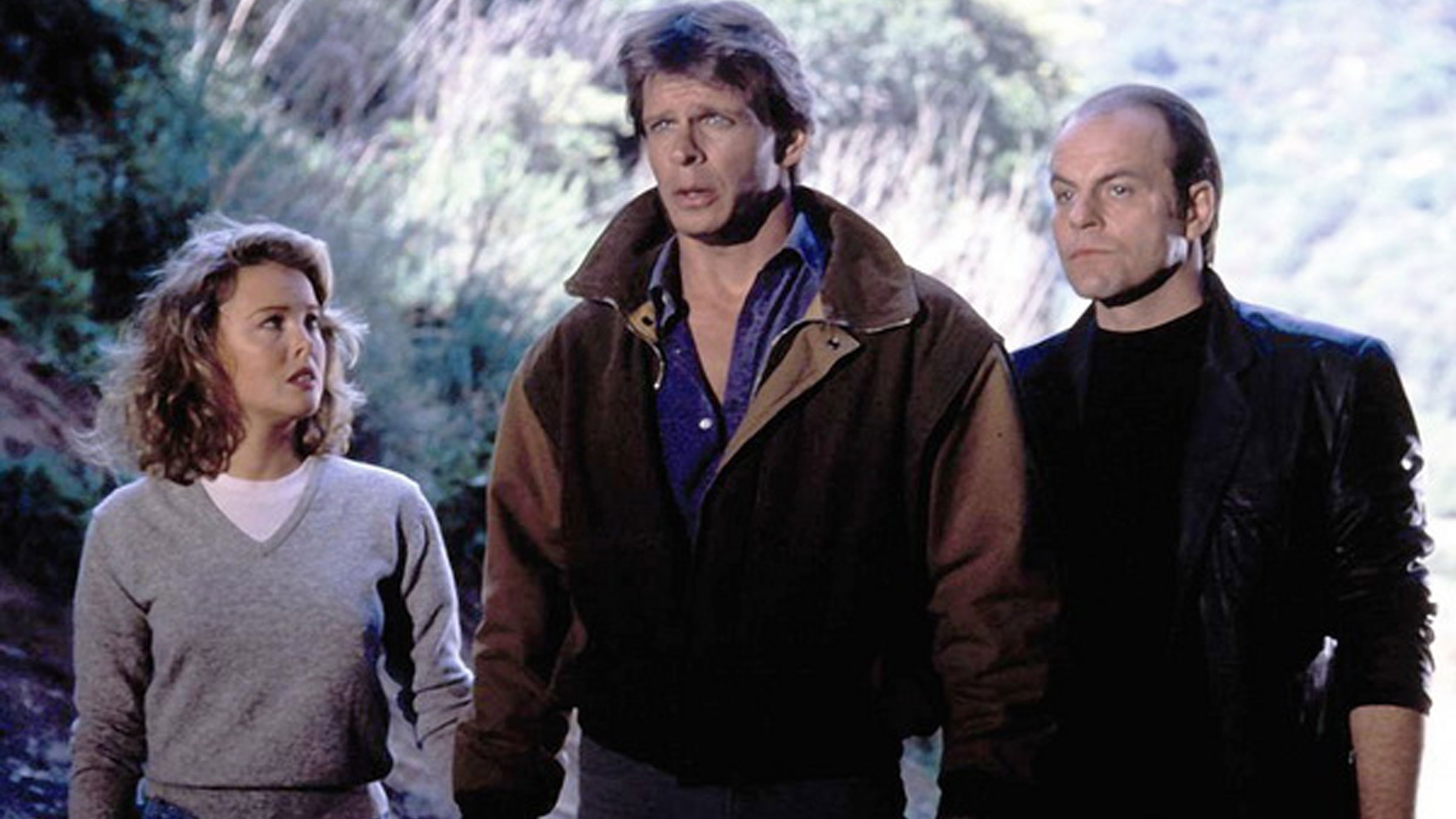 The mid 80’s were a good time. In 1984 I was 11 years old. The Summer Olympics were held in Los Angeles. Life was good. The year prior saw the world introduced to V. It was a miniseries and a huge ratings success for NBC. We were forced to wait a year for The Final Battle, but it was worth it. We had more patience then. It was before the internet, on demand television and the like. As a brief recap, the miniseries saw the world introduced to the visitors. Aliens from outer space who came to Earth and wanted peace.  They traveled in huge, disc-like ships (the film Independence Day took this and ran with it) and were located all around the world. This didn’t sit too well with a lot of the human race and soon a resistance formed. The Final Battle takes a look at the resistance, led by Mike Donovan (Marc Singer) and his ragtag group hoping to expose the visitors for what they really were.

The three part series takes place just a few months after the mini-series ended. We follow the resistance groups as they discover the visitors’ nefarious plans: to harvest humans as food. But as we learn, a human, Robin (Blair Tefkin) has become pregnant. She gives birth to a “hybrid” that’s half human and half lizard (the visitors are giant lizards with an outward human appearance). This gives the resistance the ammunition they need to help win the battle. But not all of the visitors are evil and a vaccine is developed to protect them. It’s up to the resistance to create a diversion and get rid of the alien visitors for good.

Everything that was good about the original mini-series was better in The Final Battle. Everything.  Most of the main cast was back, though the focus was Marc Singer and Faye Grant with just enough of Michael Ironside thrown in for good measure. While the special effects might seem to pale by today’s standards, they were, at the time, state-of-the-art. And it’s remarkable how well the entire series has held up. A new series was developed and ran for a couple of years in 2009, but it wasn’t the same. This is pure camp at its absolute best. I’ll go on the assumption that anyone reading this review has already seen the series, time and again, and if not – it’s well worth a watch.

Warner issued these discs on DVD about twenty years ago. The Final Battle is presented in its original 1.33:1 AVC HD transfer. And it’s remarkable how good this looks. It didn’t look this good when it originally aired, I know that.  Yes, it’s a bit odd seeing those black bars on the sides, but I think we’ve all become so accustomed to black bars on our televisions that it wasn’t distracting after a few minutes. Colors pop, detail has been vastly improved and we can see all of those awful 80’s wardrobes in their HD glory. I’ve seen plenty of television series from the 80’s on disc, but I have to say that this looks pretty darn good. A valiant effort that paid off!

We get a DTS HD Master Audio mix that’s likely derived from the original mono track. While it won’t blow the roof off the place, it does sound pretty good. Yes, some of the effects are a bit cheesy, but the way those laser blasters resonate – oh it takes me back! Vocals are sharp and crisp, though I caught a few moments when there seemed to be a bit of distortion. It’s a bit difficult to classify all of the vocals as the visitors all speak with somewhat of a distorted sense of vocalization. If you’ve seen it, then you know what to expect. It’s a good, effective track, but let’s face it – the action is on the screen and not in your speakers.

The first disc has a few trailers for the other parts “Next Time on…”. That’s it.

Three and a half decades later it’s amazing how well this series holds up. There are better out there, but for many (myself included) this has a campy feel to it that partially defined my childhood. Warner Archive’s disc looks amazing and sounds nearly as good, too. The lack of any major supplements is a bit of a letdown, but to have the entire mini-series and The Final Battle in HD is a great thing.