This set is really interesting. It features films that have recognizable faces like Lionel Atwill, Bela Lugosi, Boris Karloff, Basil Rathbone, Vincent Price, and more. Interestingly enough, this set is not as horror focused as one would expect. One film is more of a comedy, one a Medieval thriller, one an Agatha Christie style mystery, and one is a science fiction horror film. At the end of the day, calling this set the Universal Horror Collection: Volume 3 may have been a misnomer, but if one looks at the name of the set as an indicator of quality, they should be happy. Let’s dig in!

The first film in the set is not really a horror film, but more of a Medieval drama.

The displaced King Henry lives in the Tower of London hoping the Prince of Wales will arrive and displace the new king, King Edward IV (Ian Hunter.) The duplicitous Duke of Gloucester Richard (Basil Rathbone) plans to eliminate all of the heirs that stand in the way of the throne. His handy henchman and executioner Mord (Boris Karloff) carry out his will, worshipping Richard as his King and lord. There are some who suspect Richard, such as the Duke of Clarence (Vincent Price,) but most are unaware of his machinations. A young couple also finds their love affair interrupted by Richard.

While the movie is not a horror film, it is a good example of a well-written Medieval picture with some strong actors from Universal’s golden age. Karloff is excellent and very intimidating as Mord, and Basil Rathbone is perfection as the evil Duke of Gloucester. I enjoyed the film overall.

In a freak accident, a bus veers off the road and hits an electric pole. Five people are killed but one survivor (Lon Chaney) shows no effect from the electrocution of the bus. He actually is in a business of performing electrical tricks. He is kept in the hospital for observation. Meanwhile, mad scientist (Lionel Atwill) works on how man can wield electricity. Realizing that the man has developed some form of immunity to electricity, the scientist manages to conduct an experiment on him. He is changed into an electric monster!

Out of everything in the set, this feels the most like a Universal horror film. The film is ludicrous and boasts scientific mumbo jumbo that will bring a smile to the face of anybody who watches the film. It also features two horror fixtures – the “Wolf Man” Lon Chaney, Jr and the great Lionel Atwill. Pairing these two horror icons made good sense and they carry the film. While the film is silly and admittedly not their best work, I still enjoyed watching it. This is a C-grade B-movie overall.

At a mansion a family awaits news from the doctor about Henrietta Winslow. Two men, Gil and Mr. Penny, show up at the house hoping to purchase items from the estate. The Winslow residence is full of cats and even has a cat crematorium. Henrietta reads her will to her relatives. Gil sits down with her afterward and they discuss his intent to purchase the estate. Meanwhile somebody tries to poison her milk. The milk kills a cat. The last line of the will says that Abigail and the cats must die before a penny is doled out. At the crematorium, she is killed.

The black cat seems to arrive wherever people die

This is the real star of the set. This Agatha Christie styled murder mystery is very entertaining and moody. The set design is awesome. All the statues and stained glass are cat themed, which made me happy (in spite of admittedly being more of a dog person.) The film features so many fun elements: secret passages, a killer hidden within a group, mysterious property keepers, and a raging thunderstorm.

I really enjoyed this movie. It features Bela Lugosi in the role of Eduardo the gatekeeper. While Lugosi is not convincing as a Latino (?), he is tremendously fun to watch onscreen in the film. The only downside is one of the comedic reliefs, Mr. Penny. The character of Mr. Penny is one of the most aggravating comedic characters ever.  Every time he was onscreen, I cringed. This film will please all of the classic Universal Pictures fans. This is the best film in the set.

As the film begins, a peg legged sailor walks the streets. He is looking for Bill Martin, proprietor of Martin and Co. Bill also owns a small island that he has refused to sell. Bill Martin sits on his boat taking with his employee named Stuff. When they hear some commotion, they look out in time to see the phantom drop the peg legged man into the water. They rush out to assist the man and he informs them that the phantom stole half of a treasure map. Bill’s cousin George comes by to try to buy the island off of him, showing that he knows something is valuable on the island. Seizing his opportunity Bill creates a new company called

Buried Treasure, Inc. Socialite Wendy Creighton and Bill bump into each other’s cars. After this initially unpleasant introduction, she ends up joining the treasure expedition along with Thurman Coldwater.

This film is actually, despite the name, a comedy. While it has some elements of a Who-done-it like The Black Cat, the film primarily aims for laughs. Don’t let that dissuade you from watching it! It is an enjoyable and brief adventure film that works well. I definitely enjoyed this quick little film.

Universal Horror Collection: Volume 3 delivers the same level of quality present in Volume One and Volume Two. All of the films have been given new 2K scans of the films’ original materials. These scans show the age of the properties but have been restored with finesse. The best looking of the bunch is The Black Cat, but none of these suffer from lack of attention. The age of the films must be considered, and some look a bit grainy, but fans should be pleased.

Shout!Factory have provided nice DTS-HD MA 2.0 Mono tracks for each film. The dialogue is remarkably clear for how old these films are. The scores on the films have been given adequate attention and come across nicely. I never had any difficulty understanding the actors and what was happening onscreen.

Universal Horror Collection: Volume 3 is a fun (if somewhat misleadingly titled) follow-up to the first two collections. While the pictures never reach the quality of the very first collection, there are some very strong pictures in here. The weakest of the set is Man Made Monster, but it is also probably the closest to the formula of a Universal Horror picture. The best films in the set are Tower of London and The Black Cat. Fans of Universal’s back catalogue should consider this set a good bargain for the sheer variety on display. There are a lot of familiar horror icons in the films, even when the films are not primarily horror themed – Lon Chaney Jr., Vincent Price, Basil Rathbone, Bela Lugosi, and Lionel Atwill all show up in memorable roles. Fans of the first two collections should be pleased to add this third entry. Even more importantly, these releases have been successful enough that Shout!Factory have already announced a fourth collection. The supplemental materials are a little light for a box set, but are enjoyable, nonetheless. 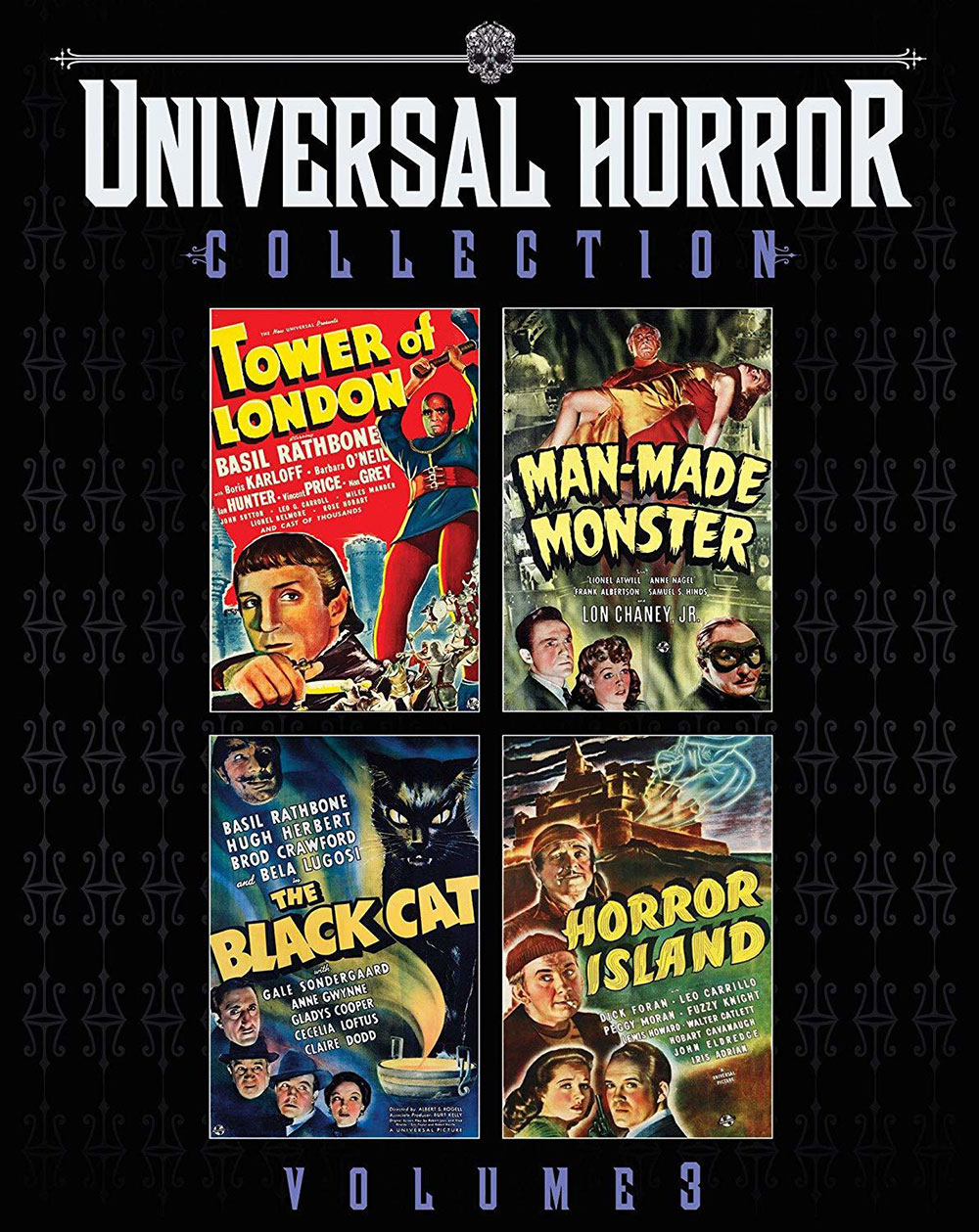