Universal Horror Collection: Volume One, earned a high recommendation and contained some classic horror films that I enjoyed discovering. Universal Horror Collection: Volume 2 picks up where the first set left off with another round of enjoyable thrillers from the archives of Universal. Due to the absence of Lugosi and Karloff, the film collection is not as much of an event, but film lovers will still find a good amount to enjoy. Three of the films feature character actor Lionel Atwill. Strangely, only three of the four could actually be considered horror films, but that felt like a minor oversight in the scheme of things. The Strange Case of Doctor Rx is closer to a detective story than a horror film. This is a fun collection that also boasts an early film from beloved cult film director Joseph H. Lewis. Without further ado – let’s dig into what is included in the set.

Murders in the Zoo

“The simplicity. They love. They hate. They kill.”

The first film in the set is directed by Edward Sutherland. It features cinematography by Ernest Haller and a script written by Philip Wylie and Seton I. Miller. it was released in 1933.

The film begins in Indochina. Eric Gorman (Lionel Atwill) sews up a bound man’s mouth and mutters, “he’ll never kiss another man’s wife again.” The prisoner escapes but is bound and can’t speak. Eric’s wife Evelyn (Kathleen Burke) asks him where Bob Taylor has gone, and Gorman explains that after last night Bob would not have stayed with them. Soon it is reported that Bob Taylor has been killed by tigers. On a ship back to America, Evelyn runs into Roger Hewitt (John Lodge.) Roger wants her to leave Eric for him. Eric interrupts them. They make plans to all go to the zoo when they get to the States. Eric is bringing back some specimens for the Municipal Zoo. Professor Evans (Harry Beresford,) curator of the zoo, hires Peter Yates (Charlie Ruggle) as a publicity agent. Yates is known to have a drinking problem. He meets scientist Dr. Woodford (Randolph Scott) and his assistant Jerry Evans (Gail Patrick.) Yates also runs into Evelyn and Roger before meeting Eric Gorman as he arrives with his rare animals. After hearing that the zoo’s budget has been cut, Yates recommends that they hold a dinner at the zoo amongst the animals to help sell private subscriptions to wealthy donors. This sets the stage for the murders in the zoo.

Out of this set, I enjoyed this film and The Mad Doctor of Market Street the most. This film has the best narrative arch of the four films in the set, veering from the exotic to the typically docile setting of a zoo. I enjoyed how the filmmakers tried to make zoos seem like places of grave danger, despite the fact that they are typically incredibly safe places for families to take a nice walk. The film re-introduced me to the great Lionel Atwill whom I had forgotten was in the fantastic Ernst Lubitsch film To Be or Not To Be. He gives a great villainous performance in the film. I also enjoyed the finale of the film as chaos erupts at the zoo. Overall – this is a fun film worth checking out.

The Mad Doctor of Market Street

“I’ll be the greatest man to walk the earth. All will honor my name.”

The second film in the set is directed by Joseph H. Lewis. It features cinematography by Jerome Ash. The script was written Al Martin. It was released in 1942.

On a rainy night, a nervous man named Sanders enters a Doctor’s practice on Market Street. Heavily bearded Dr. Ralph Benson (Lionel Atwill) explains that he is ready to move from experimentation on animals to experimentation in human beings. He offers Sanders a thousand dollars to undergo an experiment. This would be a significant help to his undernourished family. He puts the man under. Sanders’ wife and the police arrive and bust into the lab as the doctor makes his escape. Unfortunately, Sanders had passed away while in suspended animation. The police begin to search for the mad doctor before he experiments on another unwitting victim. On a cruise ship, Benson moonlights as an antiques dealer. On the ship are some people who would like to track down the doctor. Benson kills one of his pursuers by pushing him overboard. Patricia Wentworth (Claire Dodd) and other passengers are at risk as he prowls the ship. Things become more complicated when the shipwrecks and some of the passengers and the mad doctor are estranged on an island with a native tribe.

This film is an enjoyable foray into the ridiculous. How often does a film blend mad doctors, shipwrecks, and native tribes? This is the type of campy entertainment that largely has disappeared as pulp novels and films dwindled in popularity. The film shines for two reasons. The first is that it is directed by the excellent Joseph h. Lewis. He had a great eye and this film is easily the best looking out of all the films in the set. The second reason the film works is another fun turn by Lionel Atwill. He is a lot of fun as the mad doctor. This film is worth watching and enjoying.

The Strange Case of Doctor Rx

The third film in the set was directed by William Nigh. The script was written by Clarence Upson Young. The film featured cinematography by Elwood Bredell and was released in 1942.

At the Drexel Club, a man named Grayson Carter is found hung and tagged by Doctor Rx as victim number five. He had been acquitted along with four others in a trial. All had been killed by the doctor. Famous sleuth Jerry Church returns from South America with hopes of joining his family business and retiring from investigating. Dudley’s brother arrives at his apartment to try to convince him to help track down the doctor. Jerry agrees to meet Dudley in Long Island. He decides to accept the case and take the 10,000 fee. At the trial of the sixth man, he drops dead after his acquittal. Was this the sixth victim of Doctor Rx?

So – this film isn’t really a horror picture. It is more of a mystery film. The last fifteen minutes of the film features a horror element, but it is pretty brief. For film lovers that are looking for a Lionel Atwill horror film, this third film does not quite deliver the goods. Atwill’s role is pretty small in this picture despite his high billing. The film suffers from not meeting those expectations. The film does feature a small role from Shemp Howard of the Three Stooges. Unfortunately, the film also features a racial stereotype named Horatio that probably seemed out of place and stale even in 1942. Overall -this is the weakest film of the set, but it still has its moments.

“I’m a scientist. For me there is no good or evil, only true or false.”

The final film in the set was directed by James P. Hogan. The screenplay was written by Brenda Weinberg and Paul Gangelin. It was based on a story by Hanns Kraly. The film features cinematography by the great Milton R. Krasner who would later work on films including All About Eve and An Affair to Remember. The film was released in 1943.

A professor, Doctor Albert Morris (George Zucco,) discusses Egyptian death rites and how they had developed a gas that brought life in death. He convinces a medical student named Ted to help him during the school break with his experiments regarding the ancient gas. They successfully reanimate a monkey by creating an antidote to death that involves a cardiectomy. The doctor decides that they need a human test subject but shrugs off the idea after Ted says it would not be a good idea. That night he brings his fiancé Isabel, an accomplished singer and pianist, to the Doctor’s house for dinner. Isabel has started to fall out of love with Ted. The Doctor sees his opportunity to woo Isabel and decides to gas Ted. The gas turns Ted into a ghoul that obeys the commands of the Doctor. They dig up a body and the doctor create an antidote for Ted from the heart of the corpse. Ted awakes normal and unaware of his actions from the prior night. The doctor soon realizes that the antidote is only temporary and that he will need fresh antidotes from more hearts to keep Ted alive.

The last film does not feature Lionel Atwill at all, which keeps this set from serving as the “Lionel Atwill Collection,” but it does feature a premise that involves grave robbery, gas that transforms humans into ghouls, and a mad doctor. This is a fun film that features a standout performance by George Zucco as the diabolical Dr. Albert Morris. For my tastes, this was a great way to wrap up the set. While the film feels like it slightly overstays its welcome at 65 minutes, it features enough horror elements to entertain its prospective audience. I liked it.

Universal Horror Collection: Volume 2 delivers the same level of quality present in Volume One. All of the films have been given new 2K scans of the films’ original materials. These scans show the age of the properties but have been restored with finesse. The films largely come from the 1940s and have aged well. The backgrounds will feel somewhat blurry to modern film watchers, but that is due to the camera technology of the time more than anything. The films show grain but I never found it to be excessive. Some specking also occurs, but fans should be happy overall.

Shout!Factory have provided nice DTS-HD MA 2.0 Mono tracks for each film. The dialogue is remarkably clear for how old these films are. The scores on the films have been given adequate attention and come across nicely. I never had any difficulty understanding the actors and what was happening on screen.

Murders in the Zoo (Disc One):

Universal Horror Collection: Volume 2 is a solid follow-up to the first collection. It is easy to note that the lack of stars Lugosi and Karloff is definitely felt after enjoying the previous box set, but I enjoyed being introduced to character actor Lionel Atwill who plays villains effortlessly. The four films included have solid technical specs, but the set is lighter than usual on supplemental materials. The supplemental materials that are included are well done and enjoyable. I enjoyed being given the chance to watch another Joseph H. Lewis film in HD. Overall – while not as revelatory as the prior set, there is still plenty for old thriller fans to enjoy here. 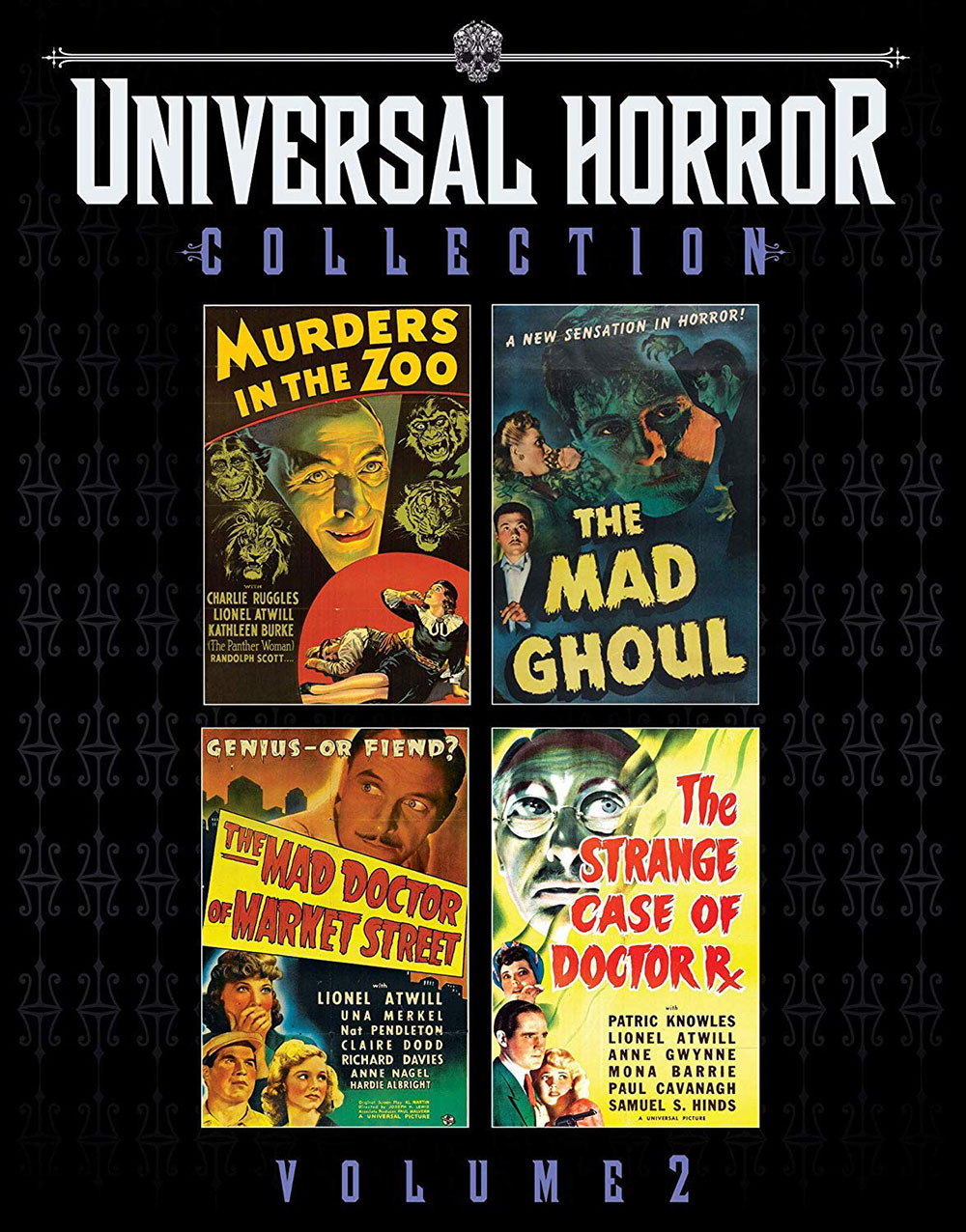