About five years ago I’d just finished reading the entire Harry Potter series of books, for the second time.  Yeah, I was a late adopter to the series but I, like everyone else, found something in them that I could relate to and used countless hours of my time digesting every bit and piece of those seven novels.  But I was done.  Now what?  About the same time a new series of books was gaining some attention, though these were about vampires and not wizards.  Hey, one thing’s just as good as the other, right?  Right?  And so I started to read Stephenie Meyers’ Twilight novels about a teenage girl who moves to Washington state only to encounter some vampires.  Oddly enough, Harry Potter and Twilight series were weirdly intertwined.  The star of the Twilight films, Robert Pattinson, also had a role in Harry Potter and the Goblet of Fire.  Twilight, the first movie, took the opening weekend spot from Harry Potter and the Half-Blood Prince when it was announced that they’d moved it to “fine tune” it.  Ok, maybe that’s where the similarities end.  But still, Twilight filled a void when I needed one filled.  Then again, that was five years ago and unless you’ve been hiding in a cave for the last few years, you’ll know that it’s now time for this saga to end.  No it’s no Harry Potter, but the Twilight saga does have legions of fans.

When the first installment of Breaking Dawn ended, we know that Bella (Kristen Stewart) is now a vampire.  Yes, her eyes are now different her skin glistens and gone is the meek and introverted (read: angsty) teen that we’ve become accustomed to in the first quartet of films.  No this Bella is decidedly different.  She leaps and bounds, literally, and even holds her own with some other vampires.  The real problem is that her offspring, Renesmee (Mackenzie Foy) isn’t that well thought of by some of the powers that be.  Namely Aro (Michael Sheen) and his minions need proof that the child doesn’t present a threat and Edward (Robert Pattinson) and Bella must gather a group of vampire “witnesses” to make their point.  Of course we wouldn’t have a movie without conflict and we know that Bella has now made her decision between “Team Edward” and “Team Jacob” (who represents the werewolves) and now it must come down to an all out battle for good versus evil.  In this case we know the good and the “evil” are the Italian vampires led by, you guessed it, Aro.  Of course I won’t give everything away, but how often in an ultimate battle of good versus evil does the evil side really win?  Right.  Either you’re saddened that the Twilight saga is now over or you’re saying your Hail Mary’s.  I’ll keep my reaction to myself.

The decision to split the final movie into two segments was one that met with some criticism.  Yes, Harry Potter did the same thing though that decision was done more to shed some light onto the characters and what they were doing.  There was so much happening in the final book, that two films seemed the right choice to make.  Ok, yeah, that and it was the final book so Warner isn’t run by a bunch of dummies – both films made tons of money.  So the final two Breaking Dawn films being done in the same fashion seemed to be more along the lines of pure finances.  I think one movie would have been enough, but I don’t call the shots for a movie studio.  In the end, things come to pass and we really didn’t learn anything that we couldn’t already see from the very first shot of the very first movie.  While Twilight may not go down as one of the better franchises, it was prosperous and, sadly, that’s what it’s all about these days.  I’m not a member of “Team Jacob” or “Team Edward”, but you know what – it’s no longer an issue for me.  It’s over.

Both parts of Breaking Dawn were shot at the same time, so it’s reasonable to assume that both films would look relatively the same.  They do.  The 2.40:1 AVC HD image is nearly absolute perfection.  Detail is amazing, the glistening and paleness of the skin look both radiant and, well, “sparkly” contrasted with the darkness of the werewolves.  Contrast and black levels both work in concert with one another and look rock solid.  There is plenty of CGI in the film, but it feels like it flows a bit more.  The ending battle royale is among the best in the series and I highly doubt if anyone will find anything to crow about in the way this final installment looks.

Again, the DTS HD Master Audio 7.1 mix is literally second to none.  The subdued, melancholy track in the first installment has been replaced by a more active, dynamic mix in this one.  Yes, vocals still sound rich and full and with Bella actually exhibiting some, uh, personality this time around we finally have a darn good mix.  As expected, surrounds echo nearly every branch breaking and cracked bone. The LFE do get a very active part all their own as well.  A top notch mix and on par with some of the best I’ve seen, er…heard.

Regarding the supplements, we do get a rather decent array here.  First up is a very well-made seven part documentary entitled “Forever Filming the Twilight Saga – Breaking Dawn Part 2” and running in at 90 minutes, we get pretty much everything we want and/or need for the film. That probably could have been the only supplement right there and it’d been ok.  But we are treated to another Bill Condon commentary that mirrors his on the first part.  Lastly we get “Two Movies at Once” because, you know, they shot them at the same time.  There’s also a little “Jump To…” feature that lets you go right to the Jacob or Edward scenes.  Also included are both a Digital Copy as well as an UltraViolet copy. 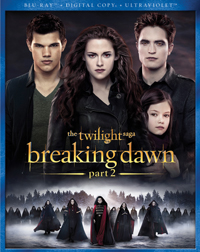