I’m willing to bet that if you showed the first twenty minutes of Tully, the new film from Jason Reitman and Oscar-winning screenwriter Diablo Cody, to a teenager going to prom – it’d be all the birth control they would need. Thankfully, for me, I inherited two step sons when I got married. I’ve never changed a diaper, have been awakened in the dead of night to feed a child or anything else that’s normally associated with parenthood.  And you know what, I’m totally fine with that. Call me selfish, call me immature, but the thought of bringing a child into this world that I’d have to take care of is the literal definition of hell on Earth for me. That being said, I realize that I’m in the minority. Switching gears to the film in question, it’s been a while since we’ve seen a collaboration between Jason Reitman (Up in the Air, Thank You for Smoking), Diablo Cody and Charlize Theron. You’d have to go back to 2011’s Young Adult, a film which I really enjoyed (ironically a story about a woman in his 30’s who refused to grow up emotionally. We’ve got a lot in common).

Theron plays Marlo, a mother of two that’s about to be a mother of three. Her husband Drew (Ron Livingston), a basically decent guy though a bit disassociated, provides for the family though his job takes him traveling quite a bit. After the birth, Marlo and Drew meet up with her wealthy brother, Craig (Mark Duplass). Craig offers them the services of a “night nanny”, someone who shows up so that the parents (mainly Marlo) can get some much-needed rest. Initially refusing the offer, Marlo cracks and reluctantly accepts the offer. It’s then that we meet Tully (Mackenzie Davis), a free-spirited girl in her 20’s living the bohemian lifestyle. Marlo sees a lot in Tully that reminds her of her younger self. The two bond and Marlo, thankful for Tully’s help, tries to envision her life as it once was.

There’s a lot to like in Tully, namely the performance by Charlize Theron. I’ve been a big fan of hers for quite some time (and not just because of her looks) and she once again delivers an outstanding performance. And though I’ve never seen Juno (though now that I’ve seen this, I might have to bite the bullet and do it), I have to say that Jason Reitman’s films have a way of speaking to me. Couple that with the script from Diablo Cody (who just recently had her third child, no doubt the basis for this film) and you’ve got something special on your hands.

The technical merits of Tully aren’t really going to astound anyone as the majority of the shots take place indoors. The 1.85:1 AVC HD does a fine job with vibrant colors, spot on detail (which, when we see the character breastfeeding, isn’t a good thing) and a good, general ambiance. Flesh tones seem warm and natural. I have to believe that Theron was wearing some sort of bodysuit to make her look heavier, that or she threw herself into the role as we see some shots of her which are, shall we say, are less than flattering. On the whole, it’s a good-looking picture and one that’s indicative of a new to Blu-ray film.

Again, Tully won’t win any awards for Best Sound at the next Oscars. By and large, this is a dialogue film that has little, if any, use for the surround channels. There are a few scenes which invoke them, though. Vocals are pure and solid, what little noise I heard from the surrounds did sound OK, but my attention wasn’t really on the audio. It’s fine, the DTS HD Master Audio track delivers, but don’t expect a lot.

As a fan of films, I have to say that I really enjoyed Tully. It’s well-written, acted and I think it’ll find new life on the home video front. Theron and Davis each give eclectic performances, though it’s Theron who commands the screen, as always. Universal’s Blu-ray looks and sounds good, but the lack of any major supplemental material will hold this one back. 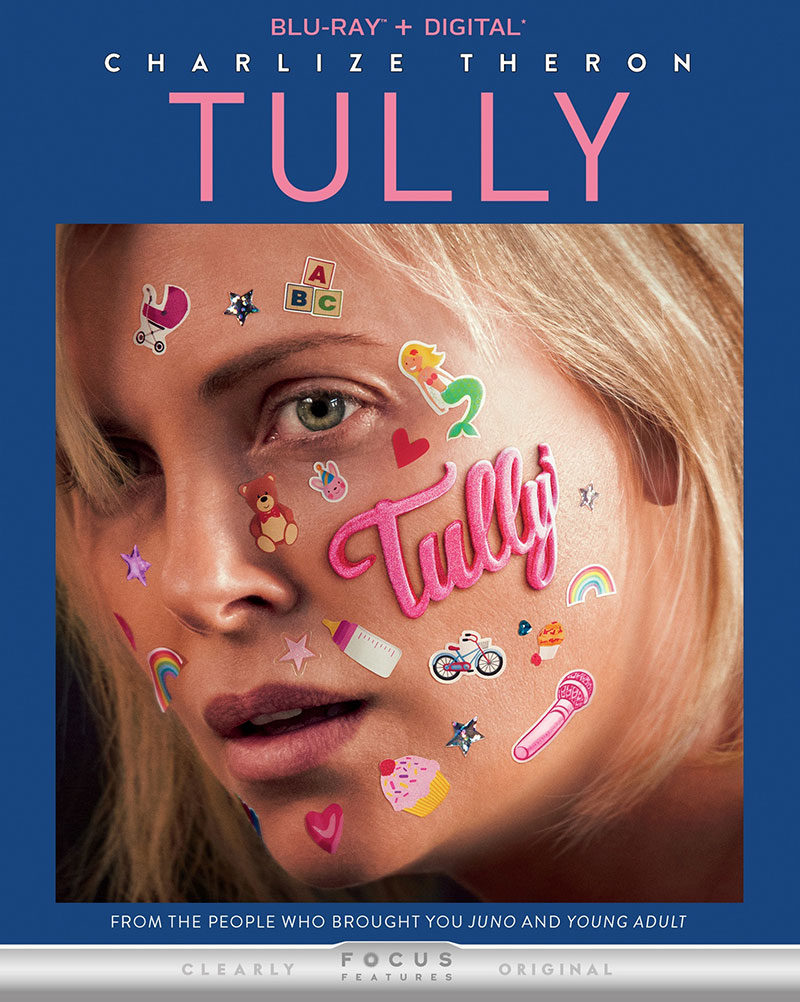