Walter Hill is one of my favorite underappreciated directors. Hill is the unsung genius behind films that include The Driver, 48 Hours, Last Man Standing, Wild Bill, Southern Comfort, Hard Times, The Warriors, and he was also one of the creative driving forces behind the excellent show Deadwood (which ranks as one of my favorites of all time.) Hill may not be brought up in a conversation of true auteurs, but in my humble opinion he is easily one of the greatest action film directors of the last quarter of the twentieth century. I recently purchased a copy of Shout!Factory’s release of Hill’s film Trespass. I had never seen the film, but based on his track record and the stars of the film, I knew it would be up my alley. I’m happy to report, it didn’t disappoint.

In East St. Louis, Illinois, a gang murder is filmed from afar on a camcorder. King James (Ice T) plays back the tape and doles out orders to his crew to take out the drug dealer that betrayed him. Meanwhile, in Fort Smith, Arkansas, two firefighters, Vince and Don (Bill Paxton and William Sadler,) arrive in a burning house. Eugene, the owner of the home, hands them some documents and screams for forgiveness before allowing himself to burn to death in the blaze. The documents show that fifty years earlier Eugene had looted a Catholic Church and stolen a fortune in golden artifacts that were on loan from Greece. The documents also contain a map to the location of the hidden gold. Seizing an opportunity to become rich beyond their imagination, the two firefighters decide to find the spot listed on the map and collect the gold. They soon find themselves in the most dangerous part of East St. Louis. The gold is stored in an old abandoned building that has a sign that says “No Trespassing.” Inside the building, they stumble across a hanging body. They decide to not report the body until they have found the gold. They press on and head to the location where the gold should be and begin to bust open floorboards. They have no idea that there is a bum that lives there named Bradlee (Art Evans) until they accidentally disturb him. Not wanting to split the gold, Don ties up the bum. A drug dealer arrives at the abandoned building with a junkie named Lucky. He thinks that he is supposed to off Licky, but he was being set up. King James and Savon (Ice Cube) arrive with their crew, including Video who videotapes everything on a camcorder. Don sneaks onto the roof to see what is happening. When King James and his crew execute the drug dealer, they catch sight of Vince and begin shooting at him. Meanwhile, Don kidnaps Lucky who happens to be King James’s little brother. Trapped in a room surrounded by the gangsters, the firefighters try to figure out a way out along with the location of the gold.

The original script for Trespass was written by Bob Gale and Robert Zemeckis in the Seventies before they had their breakout success with Back to the Future. The script at the time was deemed a little too rough. After working with Walter Hill on an episode of the great anthology series Tales from the Crypt, they felt comfortable letting Hill direct their script. The characters were moved from the Bronx to East St. Louis, and from Connecticut to Arkansas, and the film was ready to go. With Ice T. fresh off of New Jack City and Ice Cube fresh off of Boyz N’ The Hood, the package was an easy sell to the studio. They wanted to work with Walter Hill because they both loved his movie The Warriors. Hill cast William Sadler and Bill Paxton in the leading roles as the unlucky gold seekers. The resulting film is an enjoyable thriller that harkens back to the Humphrey Bogart film The Treasure of the Sierra Madre. While some elements of the film date the movie (such as the character of Video that films the illegal exploits of everyone on a camcorder, or the repetitive use of slow motion in the action sequences) the film still plays very well. Ice T. and Ice Cube were given free reign to improve their dialogue. The resulting characters have the right sound and cadence. Both shine in their roles. I also enjoyed the solid performances by both Bill Paxton and William Sadler. Paxton passed away a couple years ago and it is just a shame. He elevated every movie. The rest of the cast is rounded out by some great character actors. The bum is played to perfection by Art Evans.

The film works. In some ways the film feels like a play because of the reliance on one set piece, but the action breaks things up nicely. Water Hill does a solid job and the score by Ry Cooder helps amplify the intensity. Overall – Trespass is a fun thriller from the early Nineties. It is too bad that the film was released on Christmas which hurt its chances of financial success. It deserved a better chance to draw in audiences.

Shout!Factory presents Trespass with a good looking AVC-encoded image in 1.85:1 aspect ratio. This visual presentation is good, but it does have some of the soft focus that was so dominant in the films from the early Nineties. This is prevalent in some of Walter Hill’s other efforts so it should not be a big deal to those seeking out the film. This presentation is definitely going to be a big leap forward from the DVD, but expectations should be set appropriately.

The audio presentation on Trespass works well. The film features a solidly done DTS-HD MA 2.0 track that preserves the original sound design well. This is definitely a picture that could have benefitted from the additional channels, but I still found the track robust enough to never distract from the action onscreen.

I enjoyed Trespass. Walter Hill is a capable director and he brings the best out of the cast. With a strong central premise and a good sense of pacing, the film works well. There are some elements that date the film, and the overuse of slow motion began to wear thin on me, but it is still a fun thriller. Shout!Factory has provided an excellent array of supplements and the film looks pretty good. Fans should be happy to see the care that Shout! Factory has put into the release. There is a lot to enjoy here. 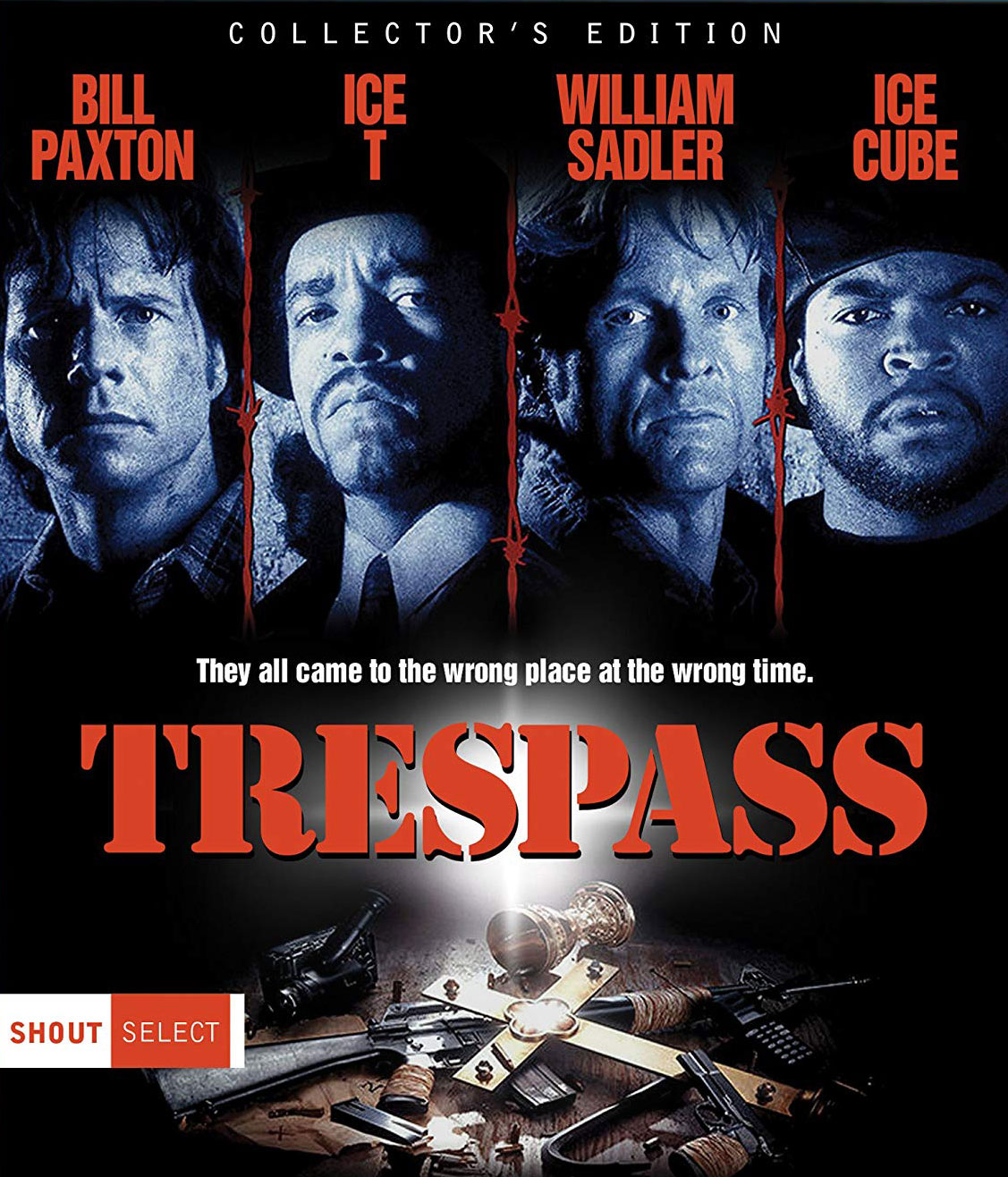