I have to imagine there’s a certain set of things to expect (or, rather, not to expect) when gearing up for a Transformers film. The movies were a result of the Hasbro toys of the mid-80’s which led to a cartoon and an early animated film so to say that the franchise has stood the test of time is an understatement. And I’ll go out on a limb and say that it’s hard to believe that it’s now been 7 years (as of this writing) since the first full-length feature film hit theaters. Starring a then relatively unknown Shia LaBeouf, the film went onto make millions and millions worldwide.  He starred in the next two installments: Revenge of the Fallen and Dark of the Moon before finally bowing out.  Ok, so that’s that. Now you’ve got Mark Wahlberg, a well-established star and producer himself who, for some reason feels it necessary to step into the franchise for its fourth installment. Does the Transformers franchise need that sort of star power?  Does it matter?  Will it look and sound amazing?  The answers to most of these questions will be answered in some way, shape or form below. Read on friends, your life just might depend on it!

I’m perpetually amazed at how a 162 minute movie can be so easily summed up regarding plot, but hey better too easy than too complicated.  We meet Cade Yeager (Mark Wahlberg), a down-on-his-luck robotics inventor who is looking for that one big shot.  He and his “business associate” (T.J. Miller) purchase an old truck found in a movie theater, but quickly learn that the truck might be a transformer. You see, the war between the Autobots and the Decepticons leveled the city of Chicago some years earlier. And now all of humanity believes every transformer (be they good or bad) to be a threat. And threats must be destroyed. The government is called in led by James Savoy (Titus Welliver) and supervised by Harold Attinger (Kelsey Grammar).  Naturally Yeager and his supermodel daughter, Tessa (Nicola Peltz) manage to escape and discover that the old truck is, in fact, Optimus Prime – leader of the Autobots. The remainder of the film is the Autobots getting the band back together, what remains of them anyway, and fighting Savoy and company.

I’ve learned to check my mind at the door when watching one of these movies and, thankfully, there’s not a lot to check to begin with. All of the Transformers films are mindless entertainment that fill the void that’s lacking in your day/life. That’s a given. As I said above, I have no idea why Mark Wahlberg hopped on board and I really have no idea why Michael Bay continues to make these films. I find it hard to believe that either one of them are struggling financially and I do believe Bay to be a very talented director. But the fact remains that these movies are a business and after a bit of research, I see that each one of these films has grossed nearly a billion dollars worldwide. I guess there’s something to be said for that. There’s a plethora of stars in this latest film with the likes of Kelsey Grammar, Stanley Tucci and Mark Wahlberg leading the way so if nothing else, there no shortage of talent.  Either these films are your thing or they’re not, and I do find myself lost in the guilty pleasure that is Transformers.  Oh and they look and sound amazing too.  So there’s that.

Oh come on now, what do you expect?  Transformers: Age of Extinction hits Blu-ray in a 2.40:1 AVC HD image that’s perfection in every sense of the word. With a second disc dedicated solely to supplements, there’s room on this disc for the movie itself along with a variety of audio tracks (more on that below).  Suffice it to say that this, like every other film in the franchise, looks positively stunning. The little intricacies in the transformers’ robot form are amazing with their detail. Blacks are deep and rich and Bay’s use of the camera is a like an artist with a paintbrush. I found nothing to complain about and found myself in jaw-dropping territory in just about every scene (since my brain functions weren’t really being used to decipher the plot, I was in awe of what was happening on screen). It’s perfect – ’nuff said.

Ok, now this is interesting in that this is the first Blu-ray disc to feature the new Dolby Atmos sound mix. What is Dolby Atmos you might ask?  Well according to Dolby’s site it’s: “…a new audio format for creating and playing back multichannel movie soundtracks. It was developed to give movie sound a more three-dimensional effect. Traditional 5.1- and 7.1-channel surround setups deliver captivating sound using speakers placed all around your room.” So, in essence, it’s not like Dolby can say “Hey, we can’t really expand upon a 9.1 system, so we’re done making sound better.” No, they’re constantly coming up with new ways to make movies sound better both at home and in the theaters.

That’s all well and good but what if you don’t have a Dolby Atmos setup (and as of this writing 99.99999% of us don’t)?  Well never fear, because your receiver will default to the included Dolby TrueHD mix that, yes really, actually shook a picture off my wall.  I liked that picture too. As I mentioned somewhere above, all of these Transformers films will sound amazing. Lossless sound penetrates and reverberates from your speakers like you were smack dab in the middle of the action. This is no exception. Vocals are strong and crisp, LFE shake the room and every other speaker that’s connected to your system plays a part in making this pure audio heaven.

I received an email from Paramount that detailed some of the specifics for the nine different versions of this film that would be found at various retailers. Nine.  Reviewed here is probably the most mainstream version, the DVD/Blu-ray combo pack.  The DVD has no supplements, the Blu-ray is on one disc with the supplements on another. Let’s dig in.

Drive Like Hell – If you’re a gear head then you’ll be in heaven here, this segment is dedicated to the cars used in the film.

Small Town, Big Movie – The opening sequences were filmed in a small Texas town and we get a first hand look as Hollywood invades this town, uses it and then throws it over their shoulders when they’re done with it. Ok, that’s a bit dramatic, but you get the idea.

Shadow Protocol Activated – Probably the most robust of all of these features is (product-placement alert) the inclusion of Chevrolet’s use of their cars as well as some shots in lovely Detroit and Chicago (what’s left of it, anyway).

The Last Stand – No that’s not Hong Kong, it’s just Detroit – albeit a stylized version of it.

The People’s Republic – Ok, this is Hong Kong!  We get a look at some of the challenges associated with this part of the shoot, the Great Wall scene and the rooftop chase.

Rise of the Dinobots – Well it’s about time!  The fourth installment finally sees the dinobots, led by Grimlock, enter the franchise.

The Finishing Touch – We get a look at some of the editing, a tour of Bay’s Florida “house” (nice) as well as some footage of the Hong Kong premiere and a bit more.

Kre-O Transformers: Take Us Through the Movies! – A bit odd, but it’s like a Lego version of this movie. No it doesn’t run 162 minutes. 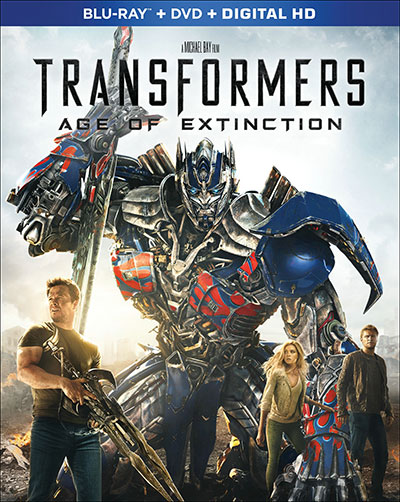