Johnny Depp hasn’t made too many bad movies…ever. Granted, not all have grossed what the Pirates of the Caribbean films have, but even with some of his earlier efforts, there’s at least something to be gleamed from his choices as an actor.  The thing with Depp is that he’s been so consistently good and entertaining in essentially every role he’s been in, it’s hard to fathom when a movie of his, well, sucks. Does Transcendence suck?  No. Is it entertaining?  Somewhat? Is it original? Not hardly. I liked it the first time when it was called The Lawnmower Man (circa 1992). The heart of the matter is that no matter how good of an actor you are, and I think we can all agree that Depp excels as a performer, one person can’t save a film. Granted, this film has the likes of Cillian Murphy, Rebecca Hall, Paul Bettany and Morgan Freeman (because he has to be in every movie made), but neither Depp nor the ensemble cast has what it takes to give life to this movie. That said, let’s take a look.

Dr. Will Caster (Johnny Depp) is a celebrity in the field of Artificial Intelligence. He’s been working on a machine that’s able to combine the intelligence of man (as in mankind) along with emotions.  Naturally he’s set out to do good, but his efforts have attracted anti-technology extremists that don’t want his work to see the light of day (so to speak). After surviving an attack, it’s discovered that the bullet that was fired contained radiation and that Caster now only has about 6 weeks to live. Conveniently, Caster’s experiment will allow him to take his mind and place it in the heart of a computer thereby allowing him to live, even though this physical form will be no more. This raises a question of ethics and morals as his wife, Evelyn (Rebecca Hall) and best friend Max (Paul Bettany) must debate the logistics and morality of it all. Of course if you’ve seen the poster, or heaven forbid – the trailer, then you know what happens.

As I stated above, Transcendence isn’t a bad film, it’s just tired, boring and utterly predictable. I like to be at least somewhat challenged when watching a movie unless it’s something that I know I’m not expected to try and understand; rather I’d just sit back and enjoy the ride. But Transcendence purports itself to be an “intellectual” film, which is what makes it ultimately so disappointing.  First time director Wally Pfister (best-known for being the cinematographer for Christopher Nolan) tries his best here, but it’s no use saving a sinking ship. Again I bring up The Lawnmower Man which is a film with the same concept, but delivered much more palpable results and an ending that really stays with you. Here, it’s just a series of movements that don’t really feel like it’s a part of a cohesive film. The actors will go onto other roles and I wouldn’t feel too sorry for the cast – it’s ok to make a bad film every now and then.

I’d like to preface this review by saying that I originally watched this film at my parents’ house on their new 75″ TV. I figured this being a science-fiction film, it’d look pretty good as compared to my paltry 58″ plasma television! I’d noticed some inconsistencies on my first viewing and chalked it up to the factory settings on their television, so when I popped the disc in my player and gave it a viewing, I was surprised when I found those inconsistencies were still present.  Hmmm…odd. There’s nothing blatantly wrong with the 2.40:1 AVC HD image and Warner has proven time after time that they’re Blu-ray’s are among the best. Still, some of the shots seemed a bit grainy, the contrast seemed a tad bit off here and there and some of the detail seemed to have a bit of haloing. While most viewers probably won’t give some of these a second thought, I did find it a bit odd that this didn’t live up to Warner’s usual standard of Blu-ray’s.

Thankfully the DTS HD Master Audio soundtrack more than makes up for the below average video as we’re treated to a smorgasbord of ambient effects and sounds. Vocals are rich and crisp, Depp’s voice booms when he becomes “digital.” The surrounds offer up an assortment of sounds that add some excitement to some of the scenes and the LFE are involved as well. The ending sequence is probably the highlight of the film when it comes to audio, but this is one track that shouldn’t disappoint.

Given the critical and commercial disappointment of the film, there’s not a lot to the supplements here, but let’s take a look at what’s included. 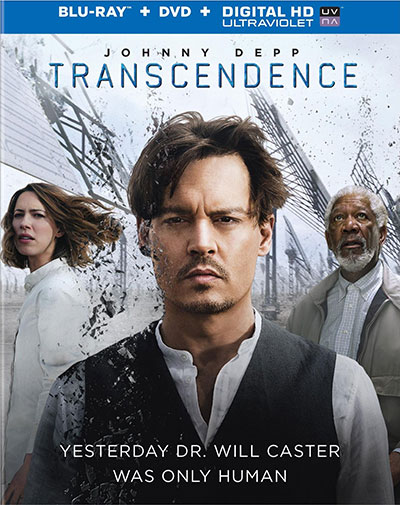