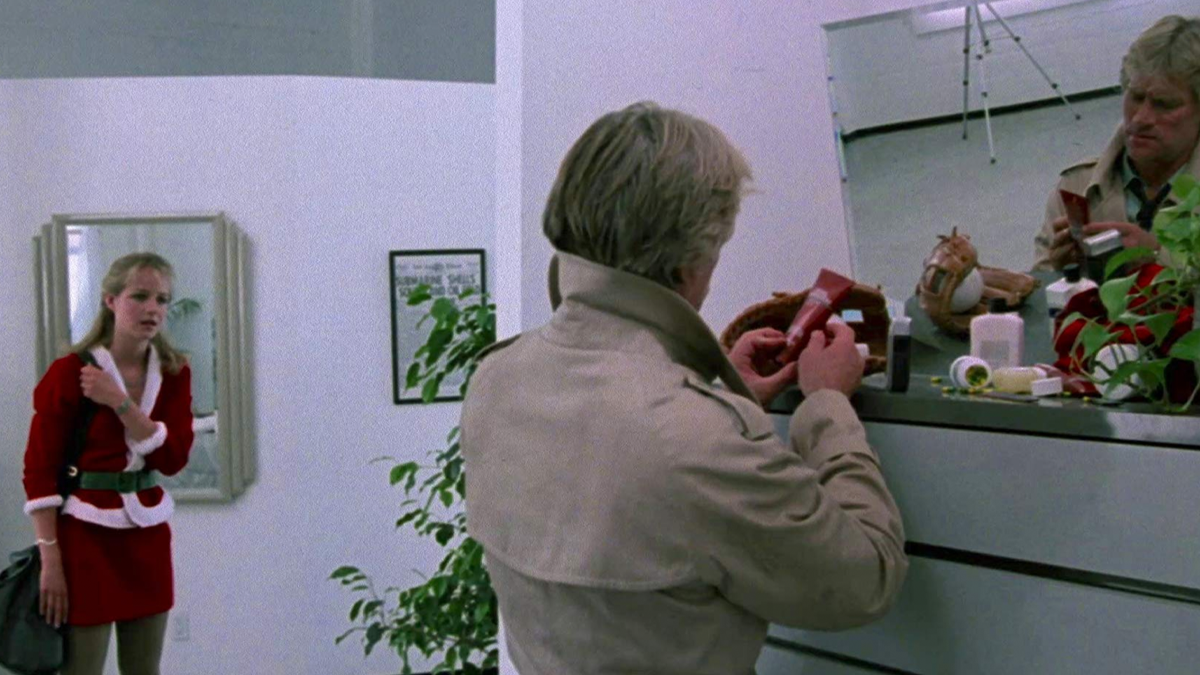 Trancers is a low budget science fiction film from Full Moon Pictures and Charles Band from 1984. The film starred a then-unknown actress named Helen Hunt and a cult-film figure in the making named Tim Thomerson. On a minuscule budget of just $400,000 the team managed to create a unique science fiction film that spawned five sequels. The movie had plenty of big ideas to make up for what it lacked in money. I had grown curious about this film because of my love of Eighties science fiction and picked up a copy this last week.

The film begins in Angel City. The year is 2247. Homicide detective Jack Deth (Tim Thomerson) enters a diner and orders a cup of coffee – a luxury in the future. Jack becomes suspicious of the customer next to him and asks for identification to make sure he is not a Trancer. Jack had lost his wife to a Trancer. Trancers are human beings that are under the hypnotic influence of Whistler (Michael Stefani.) Trancers also act like zombies and their skin turns white while under Whistler’s psychic influence. Turns out, the waitress was a Trancer. After dispensing justice and destroying the Trancer, Jack is asked by his colleague McNulty (Art LaFleur) to meet the high counsel. It turns out that Whistler has gone back in time and begun killing the ancestors of the high counsel. Jack is tasked with going back in time to defeat Whistler and protect the two remaining ancestors of the high counsel. Time travel works by sending the consciousness from the future back in time into an ancestor. In Jack’s case, it is a bachelor named Phil who lives in Los Angeles circa 1984. To aid Jack in his travels, he is given a gun which will transport back himself and Whistler and a watch that can stretch out a second into ten seconds but can only be used once. Going back in time, Jack encounters a one-night stand of Phil’s named Leena (Helen Hunt.) Leena is late for work as an elf at the mall. Jack is able to convince her of who he is and where he comes from after he kills a Trancer in front of her. The two work together to track down the counsel’s ancestors ahead of Whistler, who has assumed the identity of a policeman.

Trancers is a lot of fun. This film is definitely not high-brow, but it manages to engage the viewer with a tightly constructed and inventive story. There is a sly sense of humor to the proceedings that never makes the film feel particularly gritty or heavy. One of the better jokes in the film revolves around the obvious ridiculousness of Jack Deth’s name. The film turns it into a meta joke.

The film draws obvious influence from Blade Runner, The Terminator, and film noir tropes, but those work to its advantage rather than its detriment. Given the small budget the film had, the film is very clever in its use of practical effects. While the film is not as technologically pretty as some other science fiction films, it draws the viewer in with some unique sequences. One of the sequences that utilizes the stopwatch predates The Matrix’s bullet time sequence by fifteen years.

The actors in the film both turn in solid performances. Helen Hunt is reliably good in one of her first roles. Tim Thomerson is just plain awesome as Jack Deth. I feel like a lot of fans of the film find themselves enjoying it because Tim Thomerson is just sort of awesome. Without a strong leading man for the role of Jack Deth, the film would fall apart. It is on the strength of Thomerson that the film became a cult classic.

Producer and director Charles Band does a capable job of directing. The film is economically done (like other Band films) but gets a lot of bang for its buck. The film still manages to look pretty cool with well-used neon lighting. Cinematographer Mac Ahlberg went on to work on such classics as Re-Animator and From Beyond. The film clocks in at an impressively short 77 minutes with three minutes of credits. I love films that run this length. The film manages to avoid overstaying its welcome and leaves the viewer ready for a sequel. I had purchased the second film on Blu-Ray before the movie even ended. It is also worth mentioning that like Die Hard, this is a Christmas movie. We had just put up my tree when I sat down to watch this, so that seemed like great timing. (Disclaimer: I love Christmas movies.)

At the end of the day, I really enjoyed Trancers. I love science fiction, the Eighties, time travel, and neon. If you like those things, I feel like this movie is a pretty safe bet as long as you are not looking for something particularly serious.

Trancers arrives on Blu-ray in the year 2014 with a 1080p MPEG-4 AVC encoded image in 1.78:1 aspect ratio. The film’s cinematography by Mac Ahlberg definitely benefits from the high definition treatment. This film has a somewhat grainy image and some soft focus, but overall looks nice. I feel confident that this is the best the film has ever looked, but I wouldn’t set your expectations too high considering the original budget of the film. I was pleased overall.

Trancers sports both DTS-HD MA 5.1 and DTS-HD MA 2.0 tracks. Both sounds very similar and essentially sound like a regular stereo mix. There is not much in the way of surround activity. That said, the dialogue is delivered clearly, and I did not determine much hiss. My only quibble would be that as a 5.1 track it does not seem as if much thought was put into directionality.

Trancers is a fun B-movie sci-fi film that draws influence from some great sources. This film is a cult classic because of its inventive script and a great central performance from character actor Tim Thomerson. Helen Hunt also does well in one of her earliest roles. This movie is also technically a Christmas movie. I enjoyed the film enough that I already ordered the sequel. The technical merits are pretty good and there are a couple solid supplements. It would have been great if Trancers: City of Lost Angels had been given 1080p treatment, but beggars can’t be choosers. Recommended.