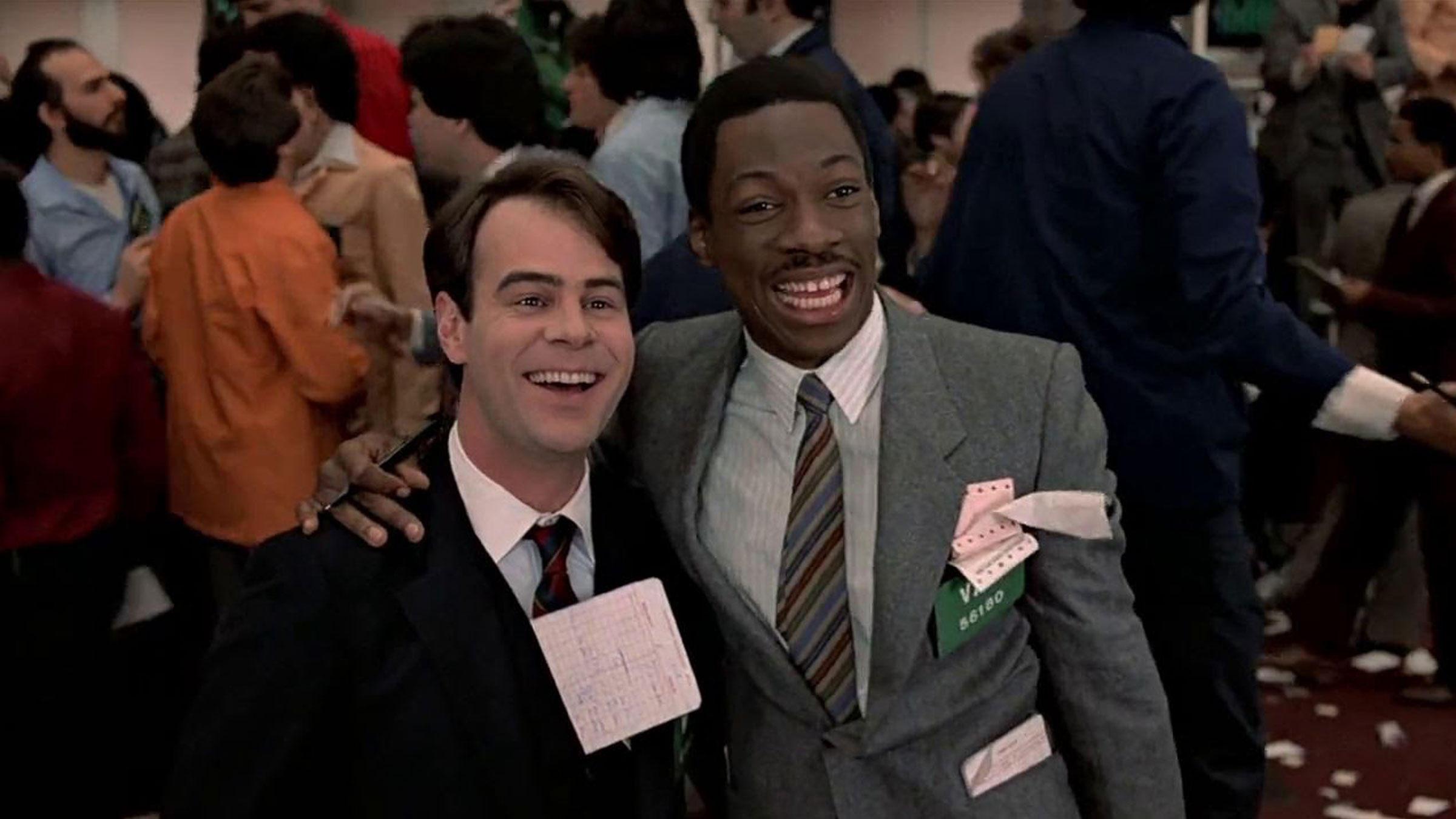 Looking back at the decade that was the 80’s, a lot of things happened and a lot of things happened in the world of film. There were several breakout stars, many of which are still working today. The obvious ones would be the “action” heroes like Arnold Schwarzenegger and Sylvester Stallone. However, let’s not forget those who made us laugh! Eddie Murphy, one-time star of SNL, made quite the name for himself during the “me” decade. Films like 48 Hours, Trading Places, Coming to America and Beverly Hills Cop established him as a dominant comedic force. That’s not to overshadow his co-star, Dan Aykroyd, who had started the decade with The Blues Brothers and had a little movie called Ghostbusters. It was quite the time for the stars of Trading Places, one of my all-time favorites.

Louis Winthorpe (Dan Aykroyd) is a man of means, a well paid employee of the Duke and Duke brokerage with a beautiful fiancee named Penelope (Kristin Holby). He is a little out of touch with the world, but when you’re rich like him, you live in a world all to yourself. On the other side of the coin is Billy Ray Valentine (Eddie Murphy), who is dead broke and panhandles to raise cash, but he rarely has success. What caused these two men to take such different paths in life? That is the question asked by brothers Mortimer (Dom Ameche) and Randolph Duke (Ralph Bellamy), who argue over which factors make a man successful. In an effort to settle their debate, they decide to have Valentine and Winthorpe change places, setting up Winthorpe for a fall from grace, while Valentine will be pulled out of the gutter. But will this social experiment really provide the answers they seek and more importantly, will they get what they deserve for tinkering with people’s lives?

This is one of those movies you can watch over and over and without fail, it always entertains. Trading Places has memorable characters, hilarious lines, and some terrific performances, all of which combine to create this classic comedy. The cast is given some great characters to bring to life and not just the leads, even smaller roles here have a lot to work with. Eddie Murphy and Dan Aykroyd have the leads and as expected, deliver and then some. Aykroyd’s spiral from the top of the world is priceless, as he really brings the desperation across well. There’s not a lot to say about this film that hasn’t been said for years and years. It’s a classic and I’ll go ahead and say it’s a great Christmas movie. Yep, I mean it.

If memory serves, this is now the third time this title has come to Blu-ray courtesy of Paramount. The first two versions were visually identical, but it’s with this new release that we really see something different. And by “different” I mean an improvement. John Landis personally oversaw the new 4K restoration and it shows. Granted, this movie from 1983 has never really been one to showcase the entire color spectrum, but everything about it looks better. There’s no dirt, no grain, colors seem improved and except for the costumes/hairstyles – it’d be very difficult to guess that this movie is over three and a half decades old. Paramount Presents’ line of Ray’s has breathed new life into several of their titles and Trading Places is their latest masterpiece.

Of note, and I have yet to try this out, the press release that accompanied the disc claims that the Digital UV code will be 4K. This is odd since all that’s included is the Blu-ray. I’d say that I’ll update this review once I check it out, but I’ll forget and will remember when I’m reading this review years from now.

The previous two versions of this title contained a, wait for it, Dolby Digital track. Yes, that’s right. I’m pleased to say that with this new edition, we finally get a DTS HD Master Audio track. That’s good, but don’t expect it to blow the walls off your viewing area. Even from the opening credits, there’s a depth that wasn’t present before while Mozart’s (or was it Beethoven’s) score plays across showing us views of Philadelphia. Several scenes have a little more depth, notably the ending scene at the stock market. Vocals are sharp and crisp lacking any distortion. It’s a good effort that easily surpasses the previous editions.

The previous versions of the title have had the same supplements. We get one new one, consistent with the other titles in the Paramount Presents line.

There’s no denying it – Trading Places is a classic in every sense of the word. It’s one of those movies that I can watch any time of of any day. Add to that, it’s the only place (that I know of) to see a topless Jamie Lee Curtis. That might not mean a lot now, but back in the day…! Paramount’s new anniversary is fairly disappointing, not because it’s poor quality, but it’s just the same disc repackaged. If you own the previous edition – save your money an invest in frozen concentrated orange juice instead.