Ben Affleck has been on the Hollywood spotlight for nearly years now. I think the first time I remember seeing him was a bit part in 1992’s School Ties and he had a larger role in the following year’s Dazed and Confused. But it was with writer/director Kevin Smith’s movies that really got him noticed. Granted Mallrats didn’t really set the world on fire but Affleck had a much larger role. It was with 1997’s Chasing Amy that really got him noticed and sometimes that’s all it takes. From there he literally went “Hollywood” with such big-budget movies like Armageddon and Pearl Harbor and of course his Oscar winning movie Good Will Hunting didn’t hurt either. Affleck fell off the radar for a few years, but has still managed to still say in the spotlight and with The Town marks Affleck’s directorial debut. The film takes place in Affleck’s hometown, Boston, and I couldn’t think of a better locale for a film like this. Yes, there have been movies about bank robbers before, but somehow this one feels pretty genuine.

We meet Doug MacRay (Ben Affleck), James Coughlin (Jeremy Renner) and the rest of the crew as they’re robbing a bank. This isn’t their first bank and by the looks of it, it won’t be their last. In the midst of this latest escapade, they take the bank manager (Rebecca Hall) hostage. They get away with it, but Doug tails Claire (Hall) to make sure she doesn’t run to the FBI with any information. As it turns out, Doug and Claire start to see one another though she’s oblivious that Doug was one of the bank robbers. At the same time the FBI led by agent Adam Frawley (Jon Hamm) is hot on their tail, just waiting for them to make a mistake. As is the case with bank robbers, it would seem that there’s always another in the works. But will they get caught by the FBI and what of Doug and Claire’s relationship?

I was somewhat skeptical of The Town namely because it had Ben Affleck’s name all over it. I’ve grown to appreciate Affleck over the years and have loved some of his offbeat choices as an actor (namely Hollywoodland and State of Play) as of late. I’ll give credit where it’s due, though, as “The Town” was a two hour movie that felt like it was 45 minutes long. Translation: it gets its claws in you and doesn’t let go. Standing toe to toe with Affleck is Jeremy Renner who some might remember from The Hurt Locker and he’s in fine form once again here. The supporting cast delivers strong performances as well and as much a player in the film is the city of Boston itself. Affleck obviously knows his town and used it wisely in this film. I thoroughly enjoyed the film and despite the subject matter, it’s a gripping film that’s sure to please.

Warner has one again put the viewer in a difficult spot. One one hand, looking at the Ultra HD version – it does excel over the previously-released Blu-ray. But the 4K version only contains the theatrical cut of the film and as anyone who’s seen the extended cut knows – that’s the superior version. Having said that, the 2.40: HD transfer that looks immaculate. I’ve only been to Boston once in my life, but I did see some sights that looked familiar and obviously I’ve seen those same landmarks in other films as well. The overall look of the film is a bit muted, with flesh tones appearing on the washed out side. Detail is amazing though, just take a look at the freckles on Rebecca Hall’s face or the perpetual five o’clock shadow on both Affleck and Jon Hamm. Contrast is well balanced, black levels are spot on and all in all a very good transfer regardless of which version you watch.

Surprisingly (or male not so much?), no new Dolby Atmos track has been added to the Ultra HD version. We’re stuck with the same, albeit very robust, DTS HD Master Audio track.  The DTS HD Master Audio soundtrack quite literally rocks on all three versions of the film. Again, I was reminded as to how Affleck has the tendency to mumble a bit, but his ramblings aren’t any fault of the mix. This is reference-quality audio, though. Car chases, gun shots, bullets fired and a few explosions thrown in for good measure. It’s a slam bang mix of LFE, surrounds and a strong front stage that’s nearly impossible to beat.

This appears to be the first version of the film (i.e. the non Ultimate Edition) with an Ultra HD version thrown in for marketing purposes. So, like Argo, you’ll have to choose what you prefer – picture quality or supplements.

Gritty, real and one of the better films I’ve seen in a long time. I’d forgotten how much I enjoyed this. It’s the anti-Ocean’s Eleven if that makes any sense. Affleck showed that after his initial directorial debut with Gone Baby Gone, he had the chops to be both actor and director. This, of course, was cemented when Argo won Best Picture a few years later (with Affleck being snubbed as a Best Director nominee). Warner’s Ultra HD version looks good, but if you want the Extended Cut you’ll have to break out the Blu-ray. Decisions, decisions… 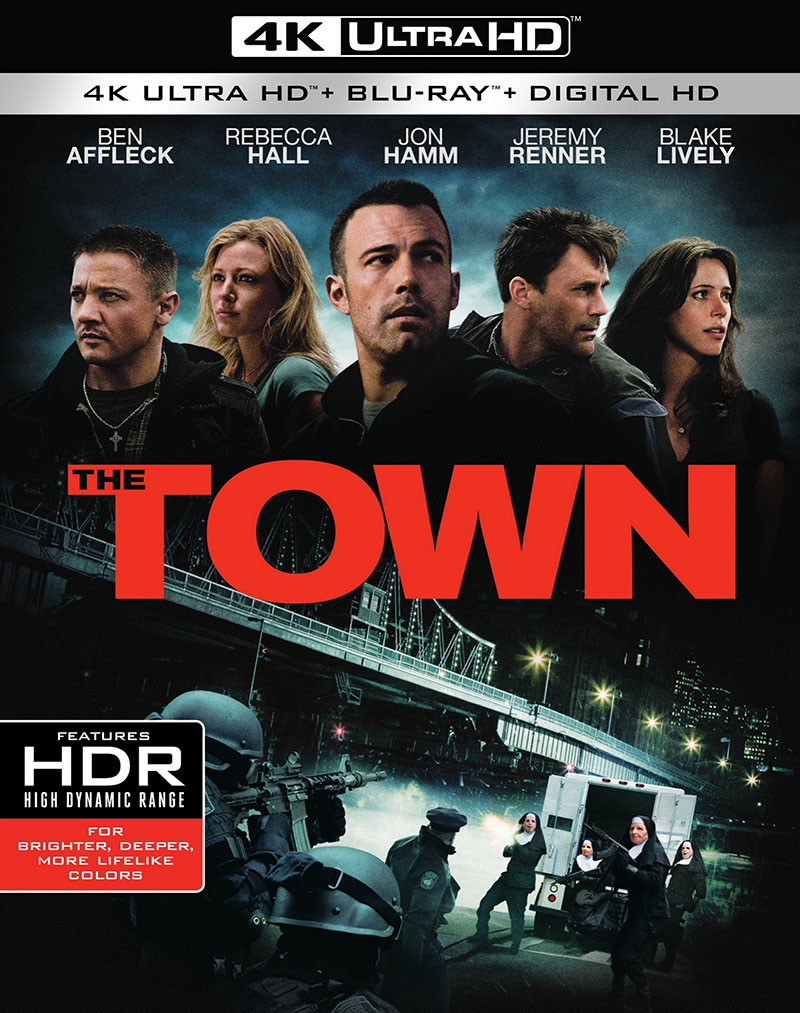