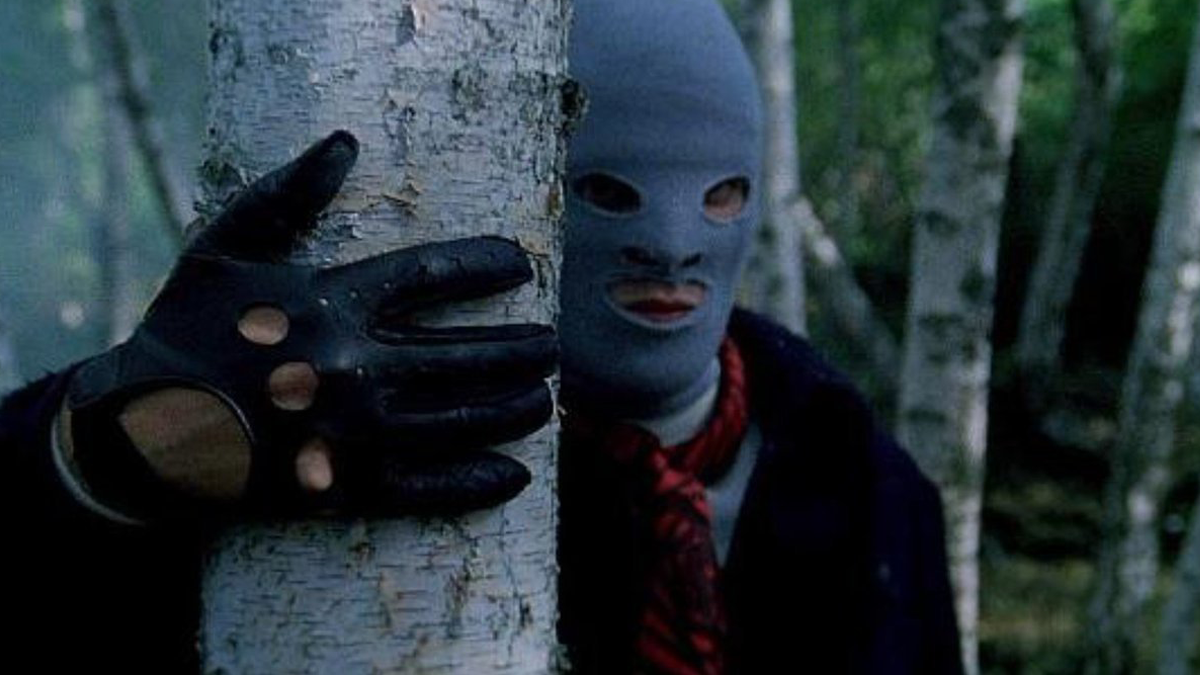 Arrow Video continues to shine as the leading distribution label for Giallo films with their release of Sergio Martino’s classic photo-slasher Torso. This is one of the better-known films of the Giallo genre and has already been released on Blu-ray once by Blue Underground. I had never seen the film but am always down to watch a good Giallo film. Over the weekend I checked out the disk.

On a college campus in Perugia, students are being murdered by a vicious masked killer. They are being strangled to death with a scarf, but the killer seems to be working out of sexual frustration as all of the killings involve some form of undress. The only clue the police have is that the killer owns a red and black scarf. Freaked out by the murders and needing vacation, four girls – Jane, Daniela, Katia, and Ursula – travel to a secluded villa in the countryside. They don’t realize that the killer has followed them there.

Like all Giallo films, this film will have a limited audience. The first half of the film plays out like the slasher films that would happen a decade later in the states. Many people think that this film and Bava’s Bay of Blood were crucial in the development of that genre. The film is somewhat cruel in the first half, but the violence is not particularly gory. I did not hate the first half, but it left me grasping for straws as to how this film had become so popular. The second half is a real thriller and I wish I could discuss it in depth without ruining anything. Basically, the second half of the film takes a very hard turn from the first half. There is no more gratuitous nudity or fairly familiar setups – instead it is closer to the type of sustained suspense you might expect from a movie like Halloween. This all leads to the solution of the film’s central mystery and a satisfying climax. It makes the film stand out from the herd.

The acting is decent but not particularly memorable with the exception of a strong performance by Suze Kendall. The music by Guido De Angelis and Mauricio De Angelis is strong and gives the film a unique flair. The direction by Sergio Martino with help from cinematographer Giancarlo Ferrando is solid with a controlled approach to the material that has some visually dynamic moments. As has been mentioned by other reviewers, this film has a lot of nudity and is not very grotesque in the violence in the film aside from a scene halfway into the film (which is more grotesque as an idea than as to what is shown onscreen.

Overall, Torso is a satisfying Giallo film with an extraordinary second half. I understand why it has such a devoted following now that I have seen it.

Arrow Video’s good-looking transfer of the film uses an AVC codec of a brand new 2K restoration from the original camera negatives. Some of the technical specs about the new transfer are detailed in the included booklet:

“Torso / I corpi presentano tracce di violenza carnale is presented in its original aspect ratio of 1.66:1 with Italian and English mono audio. Scanning and restoration work was completed at L’Immagine Ritrovata, Bologna. The original 35mm camera negative was scanned in 2K resolution on a pin-registered Arriscan. Thousands of instances of dirt, debris, scratches, picture instability and other instances of film wear were repaired or removed through a combination of digital restoration tools and techniques.”

Overall, like most Arrow releases I was pleased with the work they had done to restore the film. This is a great looking release.

The mono Italian and English language tracks were remastered from the optical sound negatives. The audio synch will appear slightly loose against the picture, due to the fact that the dialogue was recorded entirely in post production, as per the production standards of the period.

I listened to the original Italian track and thought that it sounded pretty good. The music by Guido De Angelis and Mauricio De Angelis does a good job of further separating the film from the other Gialli of that time. It’s an interesting score and pretty well done. Fans should be pleased with the track.

Torso is a well-done Giallo-thriller that subverts expectations with a strong second act. While the film to me is about a “B,” Arrow has provided a vast array of supplements making this the definitive release of the film. Fans will no doubt want to purchase this set and newcomers will want to buy this version. Torso is not for everyone due to some of its seedier material, but there is a real intelligent thriller lurking in the film that surprised me. The number of special features is pretty amazing.