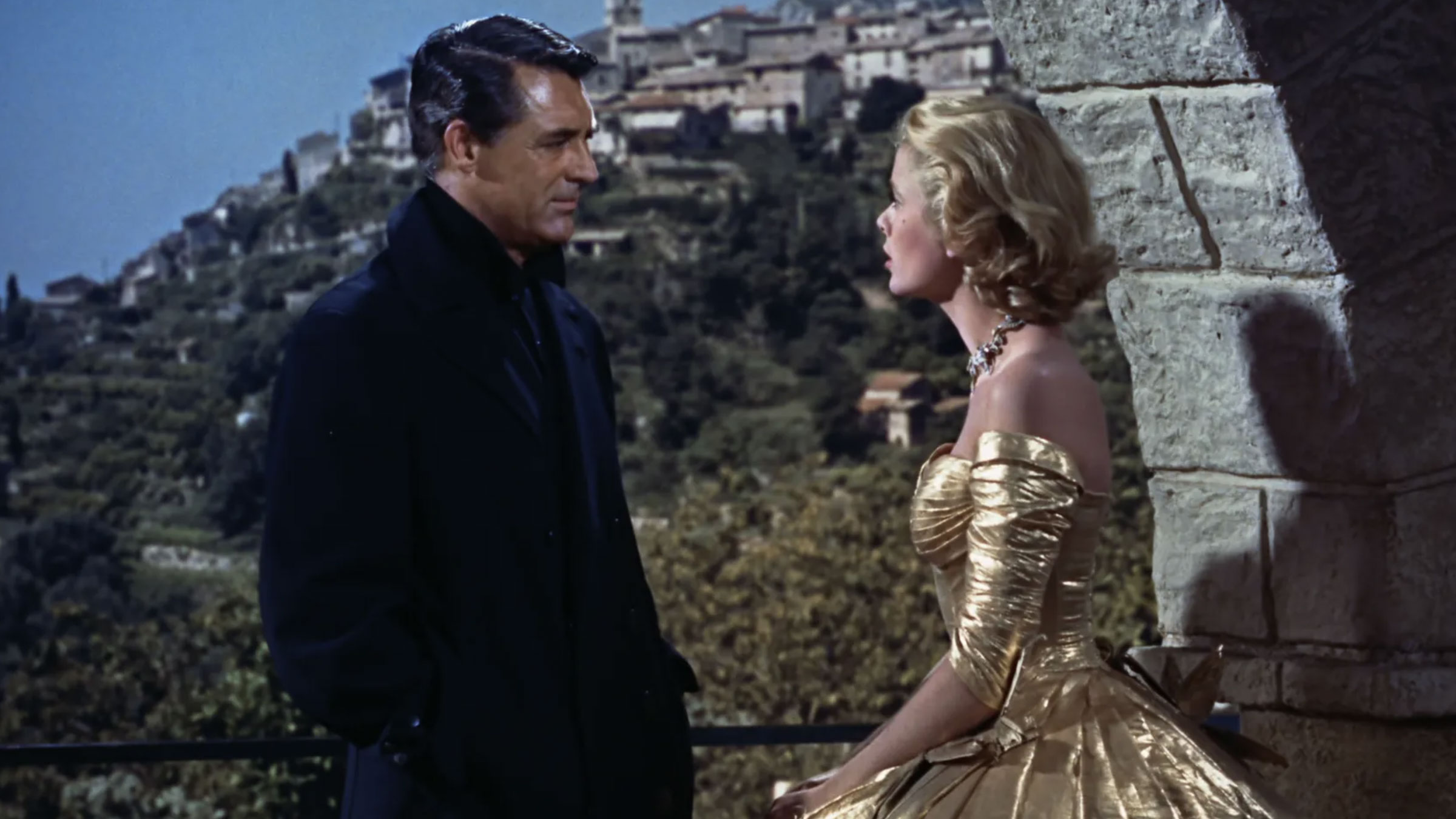 The names “Alfred Hitchcock”, “Cary Grant” and “Grace Kelly” are truly the names of immortals. Hollywood icons that were proof that “They don’t make ’em like they used to”. Hitchcock, who has gone down in history as perhaps the greatest director that has ever lived, had worked with both actors before. His teaming with Grant placed him in North by Northwest and Notorious while Grace Kelly had worked with him on Dial M for Murder and my favorite Hitchcock movie, Rear Window the year before. And as intriguing as To Catch a Thief is, it’s also a great romance movie, even placing highly with the American Film Institute’s Top 100 Passions (#46). This was also one of his more entertaining films from the man who could scare us, make us laugh and also cry. As with most of his films, this one is also a case of mistaken identity and I believe that Mr. Hitchcock had a laugh on all of us from time to time with his films.

As the opening credits start to roll, we see a male figure dressed in black, cut in with shots of a black cat, the thief is collecting quite a slew of precious (and expensive) diamonds. Yes, this is the cat burglar. John Robie (Cary Grant) now lives in the French Riviera and is a very famous ex-jewel thief. When word of this new wave of crimes hits, he and his former crew are the first suspected. The police are on him very quickly, but he manages to give them the slip and turns tail to his old cohorts. As it turns out, they’re not too happy with their reputation due to the new jewel thief. Working in a restaurant owned by Bertain (Charles Vanel). His advice is to help Robie escape the heat and to meet with someone from Lloyd’s of London (the world’s most prestigious insurance agency). Robie figures that the best way he can get he and his friends out of hot water is to catch this thief (cleverly enough, the title of the movie) during the act and therefore clear his name. Too easy, right? Of course! We then meet Frances (Grace Kelly) and her mother, two wealthy Americans who just happen to be carrying a LOT of jewels. Robie, thinking they’re prime targets, passes himself off as a businessman from Oregon and somehow works his way into Frances’ heart. However, the stakes are a lot higher when she finds out of his mysterious past.

To Catch a Thief shows us classic Alfred Hitchcock, we have chases (a la North by Northwest), romance, action and adventure. Granted, this is a tame pace compared to today’s action movies, but this has something they don’t…plot. The chemistry between Cary Grant and Grace Kelly is something that the silver screen didn’t have very often. Two of the better-looking humans…ever, on screen and entertaining us in the process. And, as mentioned before, this movie works on many levels. Truly just looking at Grace Kelly is enough to watch the film again and again. Ironically enough, this is where she met her future husband and therefore gave up acting. Take the good with the bad, I suppose. What I believe to be one of Hitchcock’s better movies (not that he had many, if any, bad ones), To Catch a Thief is sheer pleasure to watch. Recommended.

I’ve had a checkered past when reviewing this title. About a dozen years ago, I’d reviewed the DVD and had made my comments and someone told me I was way off. He sent me screen shots comparing the old versus new version and the differences were so minute that I just chalked it up to experience. Well that was in the past and now we’ve got a Blu-ray from the Paramount Presents line. It’s been re-mastered from a 4K source so the results should be amazing, no? Well in a way they are…and they aren’t. By no means does this look “bad”, but there are a few things that struck me as odd. First off, the aspect ratio – it’s been changed, much like it was in Fatal Attraction (another entry in the Paramount Presents line) to 1.78:1. Granted, that’s not much, but enough to make a difference. Second, and this is usually something I don’t comment on, there is a bit more DNR than I care for. Yes, I like a clean, glossy and film-like appearance as much as the next guy, but this is a bit much. Purists, and I don’t consider myself one, will take grain over an over processed image any day. That’s not to say the film doesn’t look good, it’s just that this new image is hit and miss.

The Dolby TrueHD 5.1 soundtrack is all we get, but by and large this is a very good-sounding track. We miss out on the depth that some of today’s modern films have in spades, but there’s a very interesting score to the film. Dialogue sounds good and I’m constantly reminded of how much Hollywood “leading men” have changed in the past sixty years. Grant’s vocals, while strong, seem a bit on the harsh side in a few instances. Grace Kelly’s baby soft voice sounds just fine. There are some ambient effects, though limited by the mix we don’t get a lot of depth.

Much like they did with the other entries in the Paramount Presents line, several features that were previously available on earlier versions of this film are now gone. The only thing new is a Filmmaker Focus segment by Leonard Maltin.

This is yet another tough sell in the Paramount Presents line. On one hand, yes we have a new transfer and depending on your particular taste, you’ll love it or hate it. We lose several supplements from earlier versions and only one new extra has been added. Yes, we have a cool new case and the cardboard cover flips out to reveal the movie poster, but I felt wanting more.