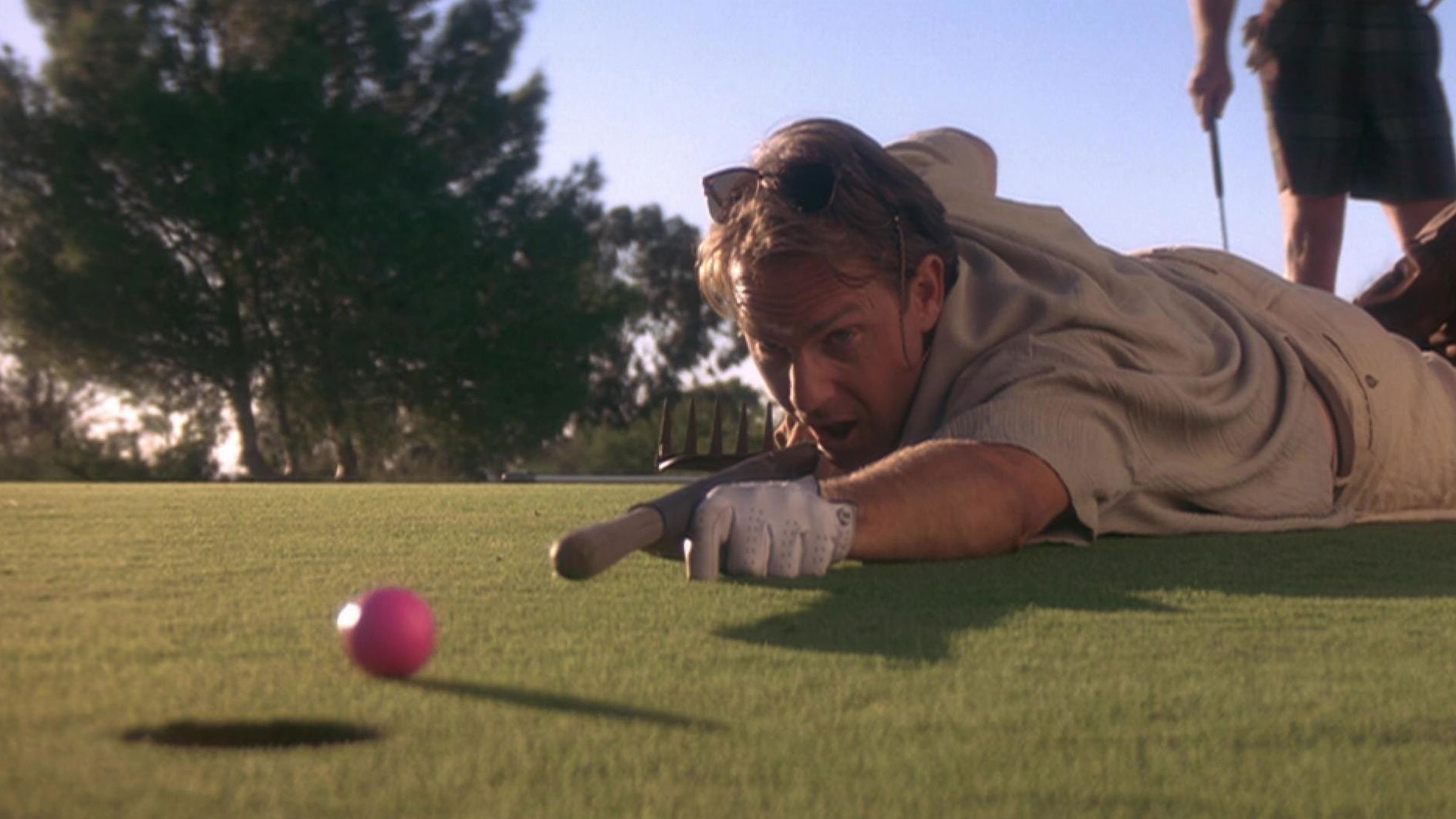 Looking back, 1996 was a good year for golf movies. And by that I mean there were two. Adam Sandler’s now iconic performance in Happy Gilmore came out early in the year and in late Summer Kevin Costner re-teamed with his Bull Durham director, Ron Shelton, for Tin Cup. The two films couldn’t be more different though they shared a common theme – golf. A lot of people don’t like the sport. I love it. But movies about golf are few and far between. The granddaddy of them all, naturally, is Caddyshack which just happens to be my favorite film of all-time. Costner was just coming off the atrocity that was Waterworld and sometimes it’s best to go back to your roots. For all intents and purposes, Tin Cup is essentially the golf version of Bull Durham – combine sports with a little bit of romance and you’ve got a tap in birdie. Enough talk, let’s sit back and let the big dog eat!

Roy “Tin Cup” McAvoy could have had a bright future as a golfer. But his competitive spirit always got the best of him. He’s now the owner of a driving range in the middle of West Texas with a lot of time on his hands. His college buddy, David Simms (Don Johnson) is the leading money winner on the tour and offers Roy a chance to caddy for him. Roy begrudgingly accepts. It’s around this time that he meets Dr. Molly Griswold (Rene Russo) who, you guessed it, just so happens to be dating David. In an effort to win her heart and prove to her that David is a classless jerk, Roy decides to try and qualify for the U.S. Open. He figures if he can do that and get the girl in the process, it’ll be a below par round. If only golf (and love) were that easy.

The film has a very low-key, laid back tone to it and that’s where Costner really shines. Yes, he’s been over the top in films like JFK, but it’s when he’s in this form that he’s at his best. That and re-teaming with Ron Shelton wasn’t exactly the worst idea. Since Bull Durham Shelton had also made another sports film, White Men Can’t Jump, so it was only a matter of time before these two were back at it. Tin Cup works, of course, as a golf film, but it’s also a pretty good romantic comedy. Ok, yes, it’s a bit predictable but then again what films of this genre aren’t? Fans of golf will have seen this film time and again, but this is one of those that I watch every year. Surprisingly this has slipped through the cracks and this is its debut on Blu-ray. Tee it up and, once again, let the big dog eat – this one’s a hole in one!

I know it’s not possible for discs to get worn out, but I’ve had my DVD copy of Tin Cup for just over twenty years. That’s two decades, folks. It was high time that a Blu-ray was released and we’ve got Warner Archive to thank for that. The film looks amazing. The 2.39:1 AVC HD encode shows improvement over the previous DVD offering. Colors have more pop, detail has been enhanced and the lack of grain gives the film a more modern, film-like appearance. The lush, sweeping shots of the golf course look great and the swept skies of West Texas have never looked more alive. This alone is a reason to upgrade.

The Dolby Digital sound mix has been replaced by an updated, and more robust, DTS HD Master Audio mix. Granted, this film isn’t one that’ll test the limits of your system, but there are several spots that this track shined. A few country/western songs are thrown in for good measure and the final act at the U.S. Open really opens up the sound stage. Vocals are sharp and crisp, surrounds aren’t used to often, but are effective. It’s a good, solid mix that’s sure to please.

Golf films are few and far between, but Tin Cup hit the sweet spot and is, simply put, a fun movie to watch. You don’t have to be a fan of the game to enjoy it (but it helps) and if Happy Gilmore isn’t your thing, then I’m willing to bet that this might be. Warner Archive’s release ups the ante with vastly improved video and audio, though it’s a shame that the only supplement is a theatrical trailer.