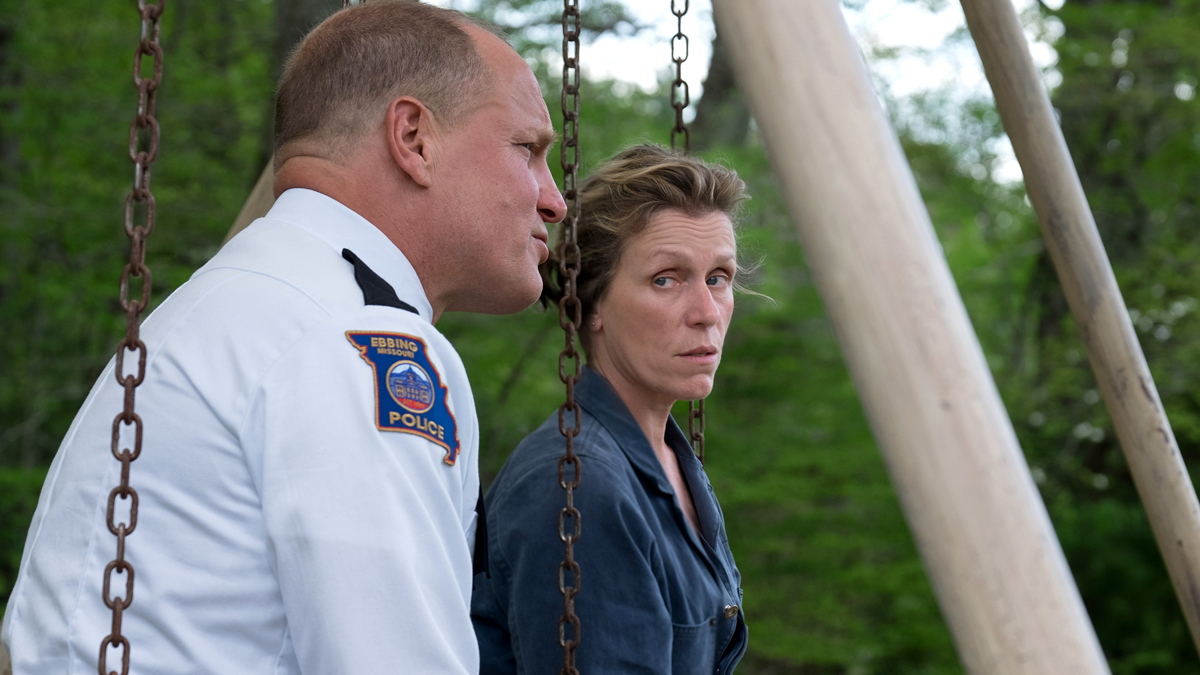 When I first saw the ads for Three Billboards I was rather intrigued. The story of a mother who lost her daughter and buys billboards to get the attention of the police department was certainly something I had never heard of before. It came as no surprise to me when it arrived in theaters to countless praise. I’m ultimately satisfied with the film overall, but it has its share of problems as well. I’ll delve into those in the next couple of paragraphs, but it is worth seeing and features several fine performances. Frances McDormand gives another strong performance, one which earned her an Oscar nomination.

Mildred Hayes (McDormand) is a mother grieving over the death of her daughter several months ago. She was raped and murdered, and Mildred feels the police department have done little to try and find her killer. Early on in the film we see her passing along an old road where she sees three vacant billboards. This leads her to go and rent out the three billboards. What the billboards are to say is what will cause a stir among the quiet town. The billboards state “Raped while dying”, “And still no arrests”, “How come, Chief Willoughby?” Needless to say, these aren’t taken well, but Mildred feels this will give the police the push they need to do something. Woody Harrelson plays the Chief and one of his officers is Jason Dixon (Sam Rockwell) who is known around town as a racist. One of the best things about the film is the attention to character development. We get to know a little something about each of the characters here. I appreciated that it doesn’t try to paint Mildred as some sort of saint. If anything, she’s far from it. We see the flashback sequence of the last time she spoke to her daughter, and it’s more than a little difficult to watch. I also enjoyed how there’s a point of redemption for several of the characters. I won’t get into spoiler territory here, but it shows that people can change for the better, even if they seem to be a hopeless case. All the positives, but I don’t feel the film is perfect. I have some serious issues with the way certain events unfold in the film. I’ll try my best to elaborate without revealing too much. I think it’s mainly when certain plot elements come into play, they’re just a little too coincidental. I was rolling my eyes at how a character decides to set a fire just as another decides to be at that exact location. Also a burn victim is placed right beside another character who was assaulted. There’s also a tense scene where a potential suspect walks into a store only to be interrupted by another character delivering a suicide note. These go on and on in the second half of the picture that I wish it had gone in a different direction somewhat. There’s also a bit too much humor sprinkled into nearly every scene. I feel the Coen Brothers handle that style of dark humor better. I laughed a few times, especially at some of the things the characters said, but it did feel a bit overbearing as well.

I don’t mean to come down too hard on Three Billboards, but I just feel the film has flaws too big to ignore. I also wondered the whole time that, despite her maybe being oblivious to modern technology, but why Mildred didn’t try to use social media to help get her point across. We see she has a son and surely he could’ve helped her or maybe a friend. I’m not saying the idea of using billboards is a thing of the past, but we all know how viral things can go with the power of social media. I also feel the ending is kind of a letdown. I’ve read arguments on both sides, with some saying how real life is like that and far from neat and perfect. That’s all true, but real life doesn’t also have random people walking in and out of it at the perfect time either. Still, the film held my interest enough that I give it a fairly strong recommendation. It’s just not without reservations.

Admittedly, Three Billboards isn’t the most beautiful movie ever shot. Lawrence of Arabia it’s not. Still, the Ultra HD 2.39:1 HEVC 4K transfer does sparkle and resonate with anything and everything that’s great about how films appear on screen. What’s that mean, exactly? It looks good. Colors are rich and saturated, detail is sharp and the HDR does offer a bit more color depth than the Blu-ray counterpart (as expected). There’s really nothing to complain about here nor did I think there would be.

Despite being a 4K title, and a new one at that, the film doesn’t feature a next generation Dolby Atmos or DTS X mix. That’s ok, as this isn’t the sort of film that would benefit too greatly from such a thing, but still it’s a bit of a head-scratcher.  That said, vocals take front and center here. I always expect Frances McDormand to talk like she did in Fargo, then again I’m not too bright. Surrounds have a few times to spread their proverbial wings, though the center and front stage handles the lion’s share of the action. On the whole, not a bad mix, but the lack of an Atmos track does confuse…

I first off want to say that I did enjoy Three Billboards and I’m recommending it, but the flaws are too hard for me to overlook. I appreciated the story, the acting and the attention to character development. It just left me rolling my eyes too often with one coincidence after another. I also wonder why the main character didn’t try to use social media as a way to get her message out. With that being said, I give the film a recommendation, but not without some reservations.