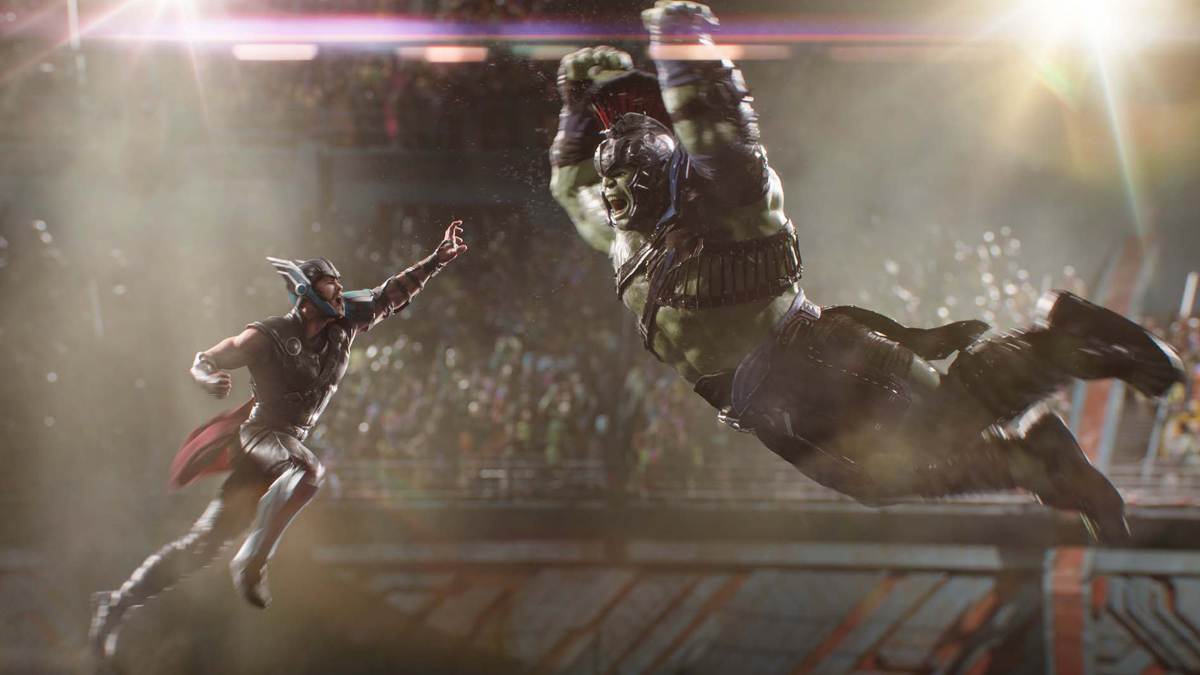 Ahhh, the MCU (that’s Marvel Cinematic Universe in case you’ve spent the last decade in a cave), is still alive and well. We’re in Phase Three now and if you need a refresher what that is, check it out. Our three established stars of the Avengers: Captain America, Iron Man and Thor now each have a trio of movies under their respective belts. And if you’re wondering where Thor and the Hulk were in Captain America: Civil War, well the events of Thor: Ragnarok take place about the same time as that film. So now you know. Of course, most of what’s happened in the MCU films are setting up for the big showdown with Thanos and his exhaustive search for the Infinity Stones; you know, those things that give anyone who possess them absolute power? This film takes a bit of liberty with that timeline, while also setting the stage with some pretty significant events in the MCU. And, in an effort to give the Thor films a bit of an edge, we’ve got Taika Waititi (What We Do in the Shadows, Hunt for the Wilderpeople) who takes a nod from the smart-ass humor of Guardians of the Galaxy.

We meet Thor (Chris Hemsworth) as he’s trying to prevent the end of the world by slaying Surtur. He then returns home to Asgard to re-secure the throne from his brother, Loki (Tom Hiddleston) who had conveniently taken the form of Odin (Anthony Hopkins). The duo then set off to Midgard (Earth) to find ‘ol one eye, but with the appearance of Hela (Cate Blanchett), that all changes. Thor is then somehow sent across the universe to compete in a tournament of sorts where he meets up with, you guessed it, Hulk (Mark Ruffalo…sort of). Along the way he encounters a Valkyrie (Tessa Thompson) who may or may not be the key to his escape and running the show is the Grandmaster (Jeff Goldblum). To say Thor has some familial issues is an understatement, but he has to survive the experience first. This begs the question: can he?

Well of course he can.

I’ll come right out and say it, Thor: Ragnarok has a different flavor than the previous two films. I think they were a bit too cute at times and tried to make the film more like Guardians of the Galaxy. Put it this way, the tongue-in-cheek factor is off the charts! But it does work. And there’s not a lot in this film or any MCU film that’s arbitrary – it does set the stage for things to come all the while giving us 130 minutes of entertainment. If you’re a fan of Thor from the comics, there are easter eggs galore with references to Beta Ray Bill, Throg (Thor was once turned into a frog in the comics) as well as numerous references to the MCU. It’s all there. There are even a few “blink and you’ll miss them” cameos by some fairly popular entertainers, too. I won’t say who they are or who they play, but it’s fun to spot them. Thor: Ragnarok manages to entertain while remaining a crucial film to the MCU. What more can you ask for?

There’s very little to complain about with this 4K offering, one of the few from the MCU. Given that the majority of the movie is CGI, there’s a lot of background and depth to take in. Thankfully the image never really suffers in the least and the 2.39:1 HEVC 4K image is fitting for a film starring the God of Thunder (or Lord of Thunder as the movie likes to say). Color spectrum is represented, contrast is strong, detail is tack sharp. Thor’s eyes glow, lightning comes out of his hand and it loos great with the HDR every step of the way. I doubt many will find anything to complain about here – this delivers.

If you can’t tell by the poster or the cover art, there’s a palpable 80’s vibe going on here and it’s represented in full by the soundtrack. Synthesizers abound and Led Zeppelin’s “Immigrant Song” serves as an anthem throughout and it works. Yes, it just works. Vocals are clear, rich and crisp and there’s no shortage of action to keep the Dolby Atmos soundtrack on its proverbial toes. Surrounds are used often and with good effect, the LFE do their part and it all adds up to one helluva ride.

It’s a different vibe from the first two films and, yes, Thor’s hair keeps getting shorter in each installment. I have no idea why. This one features a bit more humor, but manages to pull it off in a way that’s both entertaining and exciting. The disc looks and sounds nothing short of amazing and with enough supplements thrown in – it’s a welcome addition to your MCU Blu-ray/4K collection.