The Blu-ray format has as a rule been very kind to film collectors. Studios seem reticent to put out any releases that they can not guarantee fully would make back the money they put into the release. This has opened up opportunities for the film geeks to basically run the distribution business of films that make their way onto Blu-ray. Labels such as Arrow, Shout!Factory, Twilight Time, and Criterion have been successful by focusing their attention on releases that are geared towards film lovers. These labels take risks to distribute films, but in doing so they seem to have found their niche. Shout!Factory’s recent release of This Island Earth is a major release for fans of golden age science fiction films. Fans of films like Forbidden Planet and The Thing from Outer Space often mention having a similar affinity for Joseph M. Newman’s film This Island Earth. It is also famous as the film which is lampooned in Mystery Science Theater 3000: The Movie, but the version shown in that film has been shortened down for comedic effect. When my copy arrived I decided to check it out and see how I liked it.

Dr. Meacham is a famous scientist working on the application of atomic energy. His goal is to turn lead into uranium. While flying a plane, Dr. Meacham loses his controls and can’t bail out because he is too low to the ground. Amazingly, the plane rights itself and lands perfectly on the airstrip, but not before turning bright green and a loud high pitched noise is heard. It seemed like someone or something had taken control of his plane. At his lab he receives a strange bead and tests it’s properties. Intrigued, he uses a catalog that accompanied the bead and orders an interociter from the mysterious company. He builds the interociter with his lab technician Joe Wilson and they assemble the thousand pieces correctly. Once assembled they receive a transmission from a man with a large forehead and white hair named Exeter – a fellow scientist. Exeter invites Dr. Meacham to join his group of elite scientists. A plane will arrive to pick him up if he decides to join them. Exeter then fires lasers through the interociter to destroy the blueprints and catalog. The interociter self destructs. Dr. Meacham accepts their invitation. A plane arrives to fly him, but there is no pilot on board. The self driven plane flies him to Georgia. Upon arrival he meets Dr. Ruth Adams who he believes he had met and had a flirtation with three years earlier. She denies having swam with him back then. She takes him to see Exeter. Exeter explains that their goal is to end war. Soon, Dr. Meacham finds himself held captive because Exeter and his alien friends are involved in an intergalactic war and need his assistance.

This Island Earth is considered a classic science fiction film with good reason. It has a lot more imagination than most of the films made at that time – essentially moving from one set piece to the next so that it can explore an interesting concept or special effect. The film takes a full hour before it takes off for another planet and becomes pretty interesting. Because the film takes so long to get there, it can be a little bit tedious in the first half. That said, once the film gets going it is a lot of fun, utilizing great matte effects that are still very interesting to look at today. I imagine that if you saw this film as a child it would have a lasting impact on you like it did with film directors like Spielberg and Joe Dante.

The acting in the film is fun but not anything extremely noteworthy. Jeff Morrow is pretty darn good as Exeter who comes off as more desperate than villainous. Rex Reason looks and sounds like the all-American man and is fine in the lead role of Dr. Meacham. Faith Domergue does her best as an early scream queen. Her best scenes are when she encounters the mutant in the final moments of the film. The direction by Joseph M. Newman is pretty good and the effects team do particularly striking work in the film. I feel like the film could have easily been shortened and tightened up into a stronger film. If you don’t believe me, watch the 16mm version of the film included. At seven minutes long, it really works.

Shout!Factory has provided fans with not one but two out of this world good looking transfers. They have provided a Theatrical 1.85:1 Widescreen transfer and a 1.33:1 Open-Matte Full Screen transfer. Both are sourced from new 4K scans, and on both the picture quality is good. Like most films from that time, the coloring of the film seems to bleed a little bit, and grain is apparent. This is a pretty minor issue that should not annoy anyone, but it will not look like it was shot in Cinemascope either. Fine detail is pretty darn good. The film is pretty colorful and there are some really fun special effects to see in the film. With the option of viewing it in either format, I can not imagine a single fan complaining about what they receive.

This Island Earth was released into theaters with an interesting sound design. It used a a system called Perspecta Stereophonic Sound that was a three speaker setup that was a cheap surround alternative. Shout has provided a DTS-HD MA 3.0 track that replicates this and also a DTS-HD MA 2.0 track. The 3.0 track is not very good unless you plug into a 5.0 system. If you do plug into your surround system, the sound is interestingly done and an improvement over the mono track. For people without a sound system, stick to the 2.0 mono track. The sound quality is pretty excellent overall.

This Island Earth is one of the more interesting and innovative science fiction films from the Golden Era. While it is patently ridiculous, it is also a lot of fun. The film takes a while to really get going but the last third is very enjoyable. Fans of early science fiction films will surely want to add this film to their collection and set it directly next to Forbidden Planet. Shout!Factory have provided an excellent array of supplements and the film looks and sounds pretty good. Recommended! 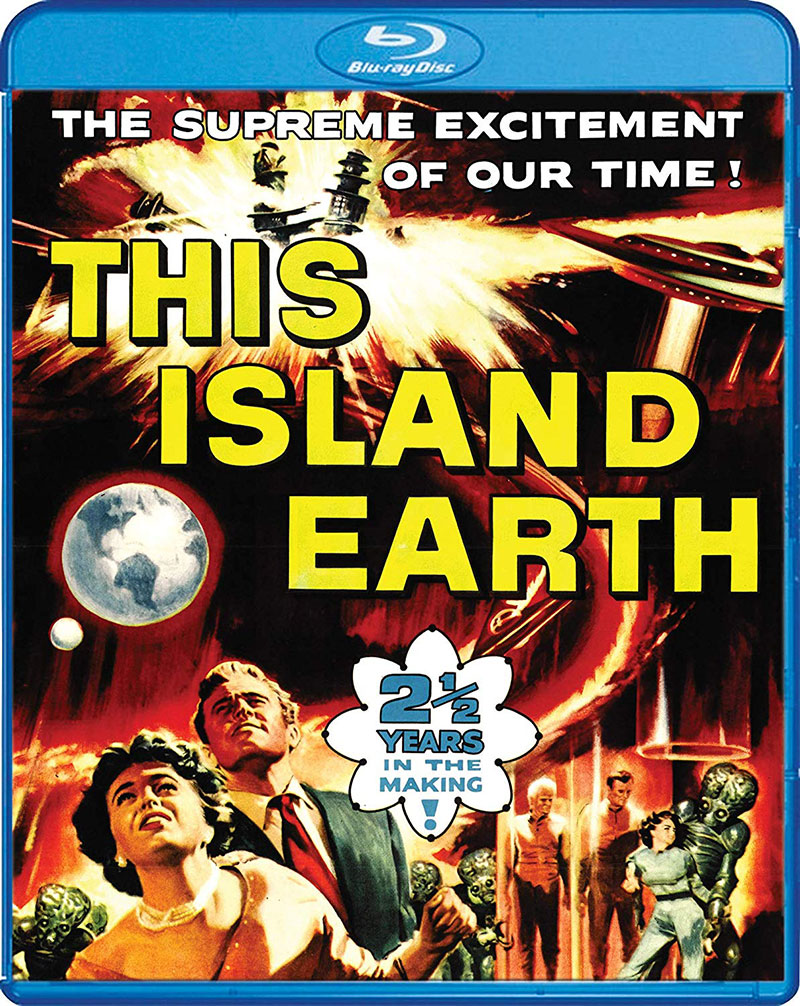