The World, the Flesh and the Devil (Blu-ray)

I have been accused numerous times of being born in the wrong decade. My tastes have always veered towards older things, whether it is listening to Miles Davis or watching an old film noir. For myself, it just feels like the movies that are made these days are missing some spark of originality that defined earlier decades. That does not mean that there are not exceptions – P.T. Anderson and Tarantino to name a couple fine auteurs working today. Warner Archive has been a steady source of older films that I would probably miss seeing entirely if it were not released on Blu-ray. Their recent release of The World, the Flesh, and the Devil combines two elements that I enjoy: post-apocalyptic science fiction and social issues from its time. It features the great crooner and actor Harry Belafonte in the lead role. I was happy to see how well the film has aged.

A miner named Ralph Burton (Harry Belafonte) is trapped in a mineshaft after a cave-in. He loses contact with the men above but hears noises that lead him to believe he will be rescued soon. After five days the noises stop and he finds his way through the cave system to the surface. In an office he sees the newspapers which read: “UN Retaliates for Use of Atomic Poison,”“All Hope Gone Says President,” and “Millions Flee From Cities. End of the World.” It’s a silent world. Some obvious calamity has occurred and nobody is to be found. The Brooklyn Bridge is packed full of empty cars from those who had attempted to flee the city. The city is completely devoid of people. Ralph is so alone that he soon finds himself going mad and talking to mannequins. He manages to survive and even rigs up electricity in one part of the city. When a blonde woman named Sarah Crandall (Inger Stevens) arrives in his neighborhood, she is cautious in approaching him. She survived by getting in a decompression chamber. As they grow to trust one another, their relationship is complicated by issues of race and the world they came from. Things become even more complicated once a third survivor arrives.

The World, the Flesh, and the Devil is an enjoyable movie. It is unique in its depiction of a silent world without people, predating later efforts like 28 Days Later and The Quiet Earth. The only bit of filmed science fiction with a similar premise from that time (that I know of) was a Twilight Zone episode. This premise comes together well thanks to the stunning black and white cinematography by Harold J. Marzorati. His shots of an empty New York still work wonderfully sixty years later. The film gets high marks for creating this silent world convincingly. The writing of the film by Ranald MacDougall is solid and explores some hot-button issues from that time such as miscegenation and discrimination. The latter third of the film is not quite as interesting as the first two thirds, but overall I liked the way the film finished.

Performances in the film are good across the board. Harry Belafonte brings a lot of charisma to his role and can make some of the lines sing that could have lain flat on the page. Inger Stevens is well cast as the last woman on earth. Mel Ferrer brings an authenticity to his role that manages to get under the skin very quickly. It’s a good performance and pretty gutsy.

The new transfer provided by Warmer Archive looks great. It is fun to see the preservation quality of an old film about everything falling apart. Presented in 1080p in 2.35:1, the film looks fantastic. Owing to the excellent black and white cinematography by Harold J. Marzorati, the film has a convincingly desolate look. Fine detail is fantastic. A very fine subtle grain presides over the film. It is another shining example of the care Warner puts into their releases.

The new DTS-HD MA 2.0 track sounds really good. There is no hiss. Dialogue is clear. This is a dialogue driven film (or is it driven by lack of dialogue?) primarily but the score by Miklos Rozsa sounds nice whenever it appears in the film. There are no issues of note on this track.

The World, The Flesh, and the Devil is an interesting mixture of post apocalyptic science fiction and racially charged drama. The film might take on a little bit more than it can tackle adequately, but I still enjoyed the film overall. Harry Belafonte leads a solid cast and the cinematography is striking. Warner Archive has provided a beautiful transfer of the film. 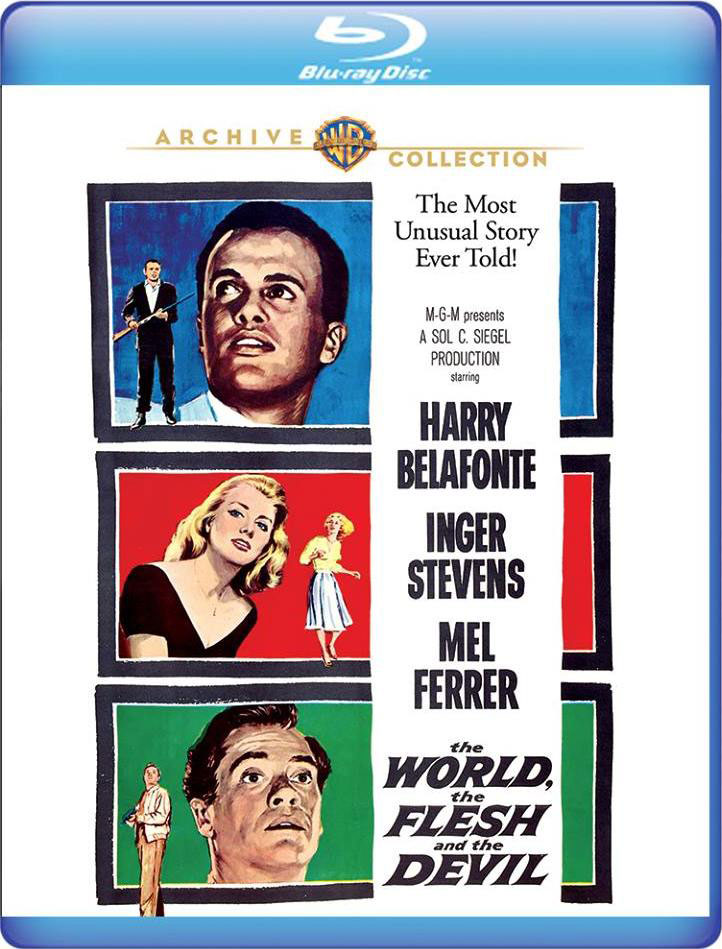