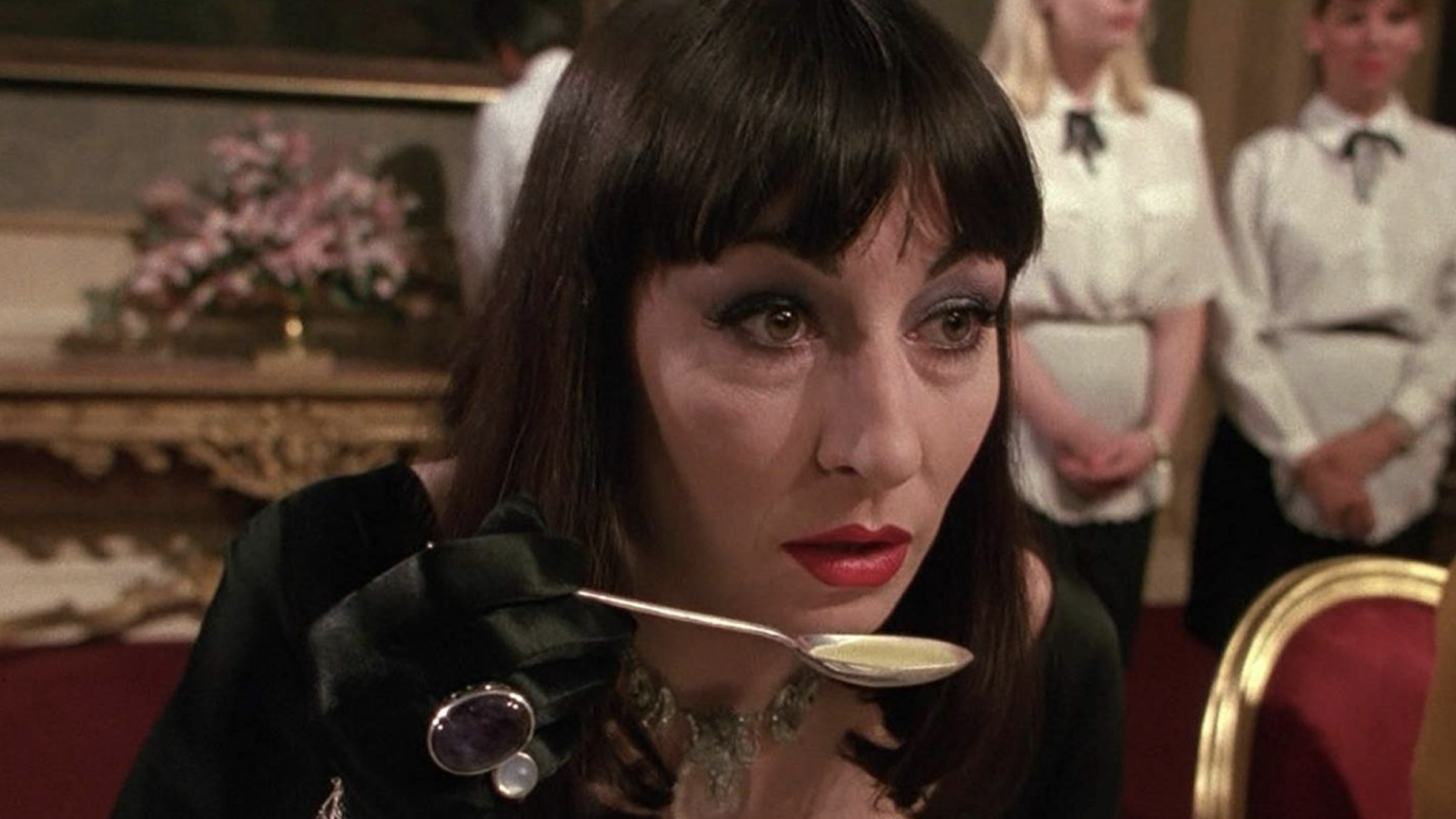 Our house is a place of grand nostalgia. My wife and I both look to our future while largely revisiting the past. We watch old episodes of Unsolved Mysteries, and in the summer we tend to rewatch Dirty Rotten Scoundrels and Captain Ron. As soon as October arrives we start revisiting all of our favorite Halloween themed films from our childhood like The Addams Family, Death Becomes Her, and I am pretty sure that I will get roped into rewatching Hocus Pocus again this year. When I saw that Warner Archive Collection would be releasing Nicolas Roeg’s seminal children’s film The Witches, I was excited. Based on a novel by Ronald Dahl, this has long been a favorite for my wife who grew up watching the film. As soon as the disc came in we watched it with our boys.

The film begins with a young boy in Norway named Luke being told by his grandmother the Scandinavian stories of witches. The boy’s parents leave for an event. The grandmother tells Luke of a young girl she knew who was captured by a witch and trapped in a picture. She herself had a close encounter with a witch that left her with one less finger. She tells the boy about the head witch that rules over them and of the discerning characteristics of witches; they don’t have toes, they wear wigs, they have scalp itch, they wear masks, their eyes have a purple glow, and little boys smell like dog droppings to witches. She tucks in the boy. When he awakes, his parents have not returned. Unfortunately they had died in some sort of accident. Luke travels with his grandmother and they stop at a seaside motel run by Mr. Stringer (Rowan Atkinson.) Unbeknownst to the guests at the hotel, most of the women staying at the hotel are in fact there for a witches’ convention. The grand high witch (Anjelica Huston) plans to unveil her new potion – formula eighty six. Luke witnesses the grand high witch turn a boy named Bruno Jenkins into a mouse by using the formula. When the witches smell Luke, they turn him into a mouse. Now it is up to Luke and Bruno to stop the witches before they use the formula to turn all the children in London into mice!

Like all of Roald Dahl’s work, The Witches is a strange mixture of dark comedy and light fantasy that will appeal to both adults and children. Dahl’s works have always worked on two levels but require both a suspension of disbelief and a willingness to indulge in some fairly subversive material. I have always enjoyed the films based on his work and have fond memories of watching them as a child. Many of Dahl’s works present children that either lose their parents (James and the Giant Peach, The Witches) or can not depend on them (Matilda.) It’s an interesting mentality that touches something in children that makes the films more relatable. The greatest film adaptation of his work is Willy Wonka and the Chocolate Factory, but I would rank The Witches as his second best adaptation. This is largely due to a great effort by Nicolas Roeg. Roeg was always an experimental and somewhat controversial director. Best known for his crazy film Performance and his great sci-fi film The Man Who Fell To Earth, Roeg had a talent for making films that are simultaneously artistic and approachable. With The Witches, Roeg also proves that he can be hilarious. Some of the choices made in the film are so strange and wonderful that I can’t imagine another director choosing them. For example, for some reason Roeg planted numerous crossdressing men in the audience of witches. It is never pointed out, but any adult viewer will begin chuckling while their kids are none the wiser. The film also utilizes camera angles in the film that are really unique and give the film a very surreal quality. If the writing by Dahl gives the film its backbone, the direction by Roeg brings it wonderfully to life. On top of that, a lot of credit for the film’s success must be given to Jim Henson’s puppeteers. The transformation sequence for the boy is pretty spectacular but also may scare young kids for a moment. Jim Henson’s work is pretty remarkable with the talking mice. They look great and the effect for the most part is believable. Practical effects admittedly appeal to me much more than computer generated graphics so I am admittedly biased. Likewise the work done with actual mice is pretty impressive as well.

Last but certainly not least is one spectacular performance. Anjelica Huston has always been amazing regardless of the role. Put her in a truly strange role such as in The Addams Family or in John Wick 3, and she really delivers the goods. The Witches gives her a chance to chew scenery and steal the entire film. She is so much fun to watch in this one. In a supporting role, Rowan Atkinson is also very funny in the film.

The new restoration done by Warner Archive of The Witches is sure to cast a spell on audiences who grew up on the film. Presented in 1080p in 1.85:1 aspect ratio from a new 2K scan, the film has received a massive upgrade from the old DVD and VHS copies of the film. Roeg is constantly losing fairly soft focus, but fans will already be familiar with his style. The film is visually very attractive thanks to some very colorful moments. This is a massive upgrade over previous releases and should please any fans of the film.

Similar to the video treatment, the audio treatment on The Witches sounds great. Warner have provided a great DTS-HD MA 2.0 track. Dialogue is clear and crisp. No hiss or distortion. The score fits the film well and gives the film a good backbone for the strange proceedings in the film.

The Witches is a great example of a well-made children’s film. While there are a couple moments that are sure to scare small children, the film should be enjoyed by children and adults alike. Nicolas Roeg does an excellent job of visually adapting Roald Dahl’s novel. Anjelica Huston turns in a fantastic performance as the evil Head Witch. Fans of the film will be very happy that Warner has taken excellent care of the film. The new transfer looks absolutely wonderful, so upgrading is recommended for fans of the film.