If you’ve somehow missed Kevin Hart in a movie then I have to salute you – for you clearly have an escape that most of don’t. Hart’s phenomenal rise to stardom over the past few years is amazing to say the least and, admittedly, I haven’t really seen a lot of his work. I know he’s 5’2”, a fast-talker and essentially the re-incarnation of Chris Tucker; so I suppose that a reboot of the Rush Hour franchise isn’t too far away? That said, what I have seen of him is pretty funny. So when The Wedding Ringer arrived at my doorstep, I wasn’t really sure what to think. The movie was released in theaters on January 16 of this year and not even 80 days later I’ve got a Blu-ray copy in hand. Truthfully, the movie studios dump their films in theaters in January because it’s the post-holiday/pre-Oscar season and people, I suppose, just want to see a bad movie. Maybe there’s some justification of studio execs who can say “Ok, your movie has been released.” Then again, this is a Sony movie, so we can probably read emails as to what was actually said about the film. Was that a little below the belt? Let me quit changing the subject and let’s move on.

Doug Harris (Josh Gad) seems to have it all. He’s inherited his father’s business, had tons of money, the seemingly perfect fiancé in Gretchen (Kaley Cuoco) but he’s lacking on thing – friends. After calling everyone he knows and asking them to be his best man, he’s at the bottom of the barrel. Luckily Jimmy Callahan (Kevin Hart) has a business that provides a service to individuals like Doug. For a price, Jimmy will be the best man and put on a show of a lifetime. But, as fate would have it, Doug has promised Gretchen 7 groomsmen, so it’s now up to Jimmy to pull off a miracle (the “Golden Tux” as he calls it). Of course, the usual pratfalls come up and Jimmy’s rag tag group of groomsmen is straight out of a comic book. Or, as Doug says “It looks like the cast of The Goonies grew up and became rapists!” Jimmy’s a pro, no doubt about it, but can even he pull this thing off with no one being the wiser?

My initial comment was in reference to 2005’s Hitch, starring Will Smith and Eva Mendes. In that movie Smith’s character taught men how to get women. I guess this movie is the natural progression of that film, with a bit of Wedding Crashers thrown in for good measure (also released in 2005, I might add). As much as I wanted to hate the movie, it grew on me – quickly. Hart’s mile a minute dialogue works here and even better with Josh Gad’s dry sense of humor. The supporting cast does their best to keep up, but this is clearly Kevin Hart’s film from beginning to end. Having gone through the ordeal of a wedding once (and hopefully only once), it’s no fun. I’d rather chew off my own arm than sample salad dressing. The film manages to convey all of the stress associated with a wedding along with the dilemma of not having a wedding party. My usual advice is to check your brain at the door with this kind of film, but it’s actually pretty insightful and clever and not the total waste of time I thought it would be. Color this guy impressed!

Sony’s 2.40:1 AVD HD image sparkles from opening scene to the closing credits. The familiar “Mastered in 4K” banner adorns the back of the box and it’s not misleading in the least. I felt a few of the scenes were a bit on the overcooked side, but by and large the image oozes of clarity, detail and color. Doug’s apartment overlooks downtown LA and even little things in the background (like the ESPN building or bar) are clearly visible. The HD image seems rock solid throughout, with only one instance (towards the end) of a little movement in the background. It’s not a perfect transfer, but it’s darn close.

Don’t let the opening title song “I Gotta Feeling” by the Black Eyed Peas, throw you – the DTS HD Master Audio track is typical of a slapstick comedy with some directional effects here and there. Vocals, especially those uttered by Kevin Hart, are pure and true. There aren’t a lot of examples of dynamic audio to crow about, mainly some loud party scenes and a few poor renditions of “You Are So Beautiful” by Jeff Ross’s character. Surrounds are present, but not actively used and I rarely felt myself even aware of their presence. All in all it’s a nice, consistent track, but nothing that’s really too impressive.

Sony’s given this Blu-ray a fair amount of extras, though none are really too substantial. Nevertheless, let’s take a look.

As much as I wanted to dislike The Wedding Ringer, I was pulled in by Hart’s performance. He makes the movie work, but that’s not to say that it’s only him. Taking obvious cues from films like Hitch and Wedding Crashers, this isn’t’ the most original film you’ll see, but if you like some obnoxious humor and ensemble casts that don’t mind making fools of themselves, it might be enjoyable. The Blu-ray offers up solid image quality as well as a decent audio track and a smattering of extras only sweeten the deal. 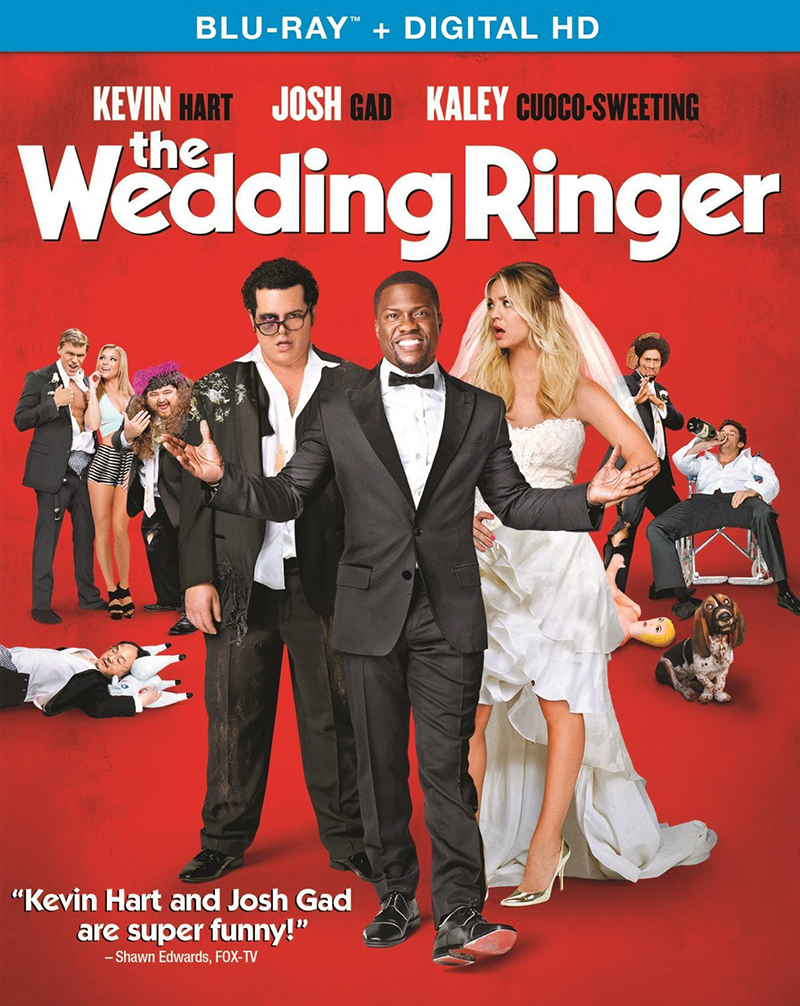